The Verse of Affection and The Ahlul-Bayt 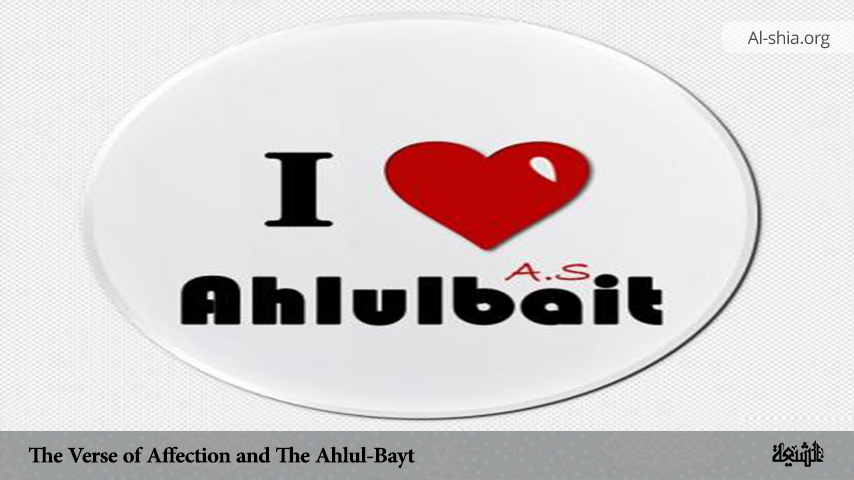 Verse 23 of Chapter 42 enjoined the noble Prophet to ask the entire Muslims to love his “Qurba” as a reward for his message. Therefore, the verse is referred to as the “verse of affection”. Now let’s observe the main difference in the existing English translations of this verse, particularly in the clause “fil-Qurba“:

Now here is the gist of the explanation by two famous exegetes we have selected, Ibn Kathir (a 13th-century Sunni exegete) and Allamah Tabatabai (a 20th-century Shiite exegete) followed by our comments:

Say: No reward do I ask of you for this except to be kind to me for my kinship with you. Means, Say, O Muhammad, to these idolaters among the disbeliever of Quraysh: I do not ask you for anything in return for this message and sincere advice that I bring to you. All I ask of you is that you withhold your evil from me and let me convey the Messages of my Lord. If you will not help me, then do not disturb me, for the sake of the ties of kinship that exist between you and me.

The meaning of the word Ajr is complete when the questioner has done some work beneficial to mankind and society. He can then ask for a wage that is equal to the effort he has put in. In the verse being discussed recompense will make sense when the Messenger has guided the Quraysh and they have believed but since they remained adamant on their disbelief not believing anything that the Messenger told them, the meaning of Ajr remains incomplete.

Further, this explanation goes against the Qur’an because Allah does not approve of the love of those who do not believe in Allah. Ibrahim (a.s.) is praised for his pattern when he said to the disbelievers: “we will always hate each other until you believe in One God”. How could Prophet Muhammad (PBUHH) say, “If you don’t love me because I am a Prophet then love me for being your relative?”(1) In short, if those who were asked about the recompense are supposed to be disbelievers or their relatives, then the recompense has no meaning and such an idea goes against the Qur’an. Hence, the explanation by Ibn Kathir is objected.

Say: I ask you for no recompense but that you love my (Ahlulbait). The love that has been made compulsory as the recompense of the ministry of the Messenger is the invitation to achieve well-being in this world and the hereafter. On this basis, this verse has no relations (or does not contradict) with the verses that deny the possibility of the recompense of the Messenger. The verse will now mean and read as I do not ask you for any recompense and God has made closeness to me as compulsory. I regard your love for my Ahlulbait as (equal to) the recompense of my ministry. In the same sense, God says in verse 96 of Surah Maryam, Verily the Beneficent God will bestow love upon those who believe and do good deeds. God will soon fill their hearts with love.

Comment: According to this explanation, the recompense of the ministry of the Messenger of Allah has been replaced or equated with the love of his progeny who are on the path of God. Accepting the invitation of God or the path of God willingly has the same connotation as the verse: Whatever recompense I have asked of you is only for your souls, my recompense is from God alone. This explanation is also striking because the reward for loving the Ahlulbayt goes to the one of loves them since the reward of the Messenger is from God alone.

We, therefore, see from Tabatabai’s explanation that no other meaning of the clause’ fil Qurba will make sense except my Ahlulbayt because, in the case of Ahlulbayt, the meaning of Ajr becomes complete as they are believers who willingly accepted the invitation of God and the Messenger can now ask for a wage equal to the effort he has put in. The clause fil-Qurba has to mean those who are a path or means to attaining closeness to Allah. This meaning is similar to the verse: He said, No reward do I ask you for this save that you willingly take a path to your Lord. (2)

In conclusion, the love of Ahlulbayt is the recompense of the ministry of the Messenger of Allah as it conforms to the purpose of his ministry. This love is compulsory for all believers because the Ahlulbayt are the path to attaining closeness to Allah and His honoured Messenger (peace be upon him). Poser: Based on the above comment, why can’t we say that the clause “fil-Qurba” can also mean “among relatives” or “those near of kin” of the believers rather than specifically saying “The Ahlulbayt”?

Reply: First, such meanings of the clause “fil-Qurba” would contradict the verses that deny any compensation for the Messenger. Second, not all the relatives of the believers can be considered believers. Third, loving your believing relatives cannot replace or be equal to the recompense and purpose of the ministry of the Messenger.