The Various Kinds of Law in Islam 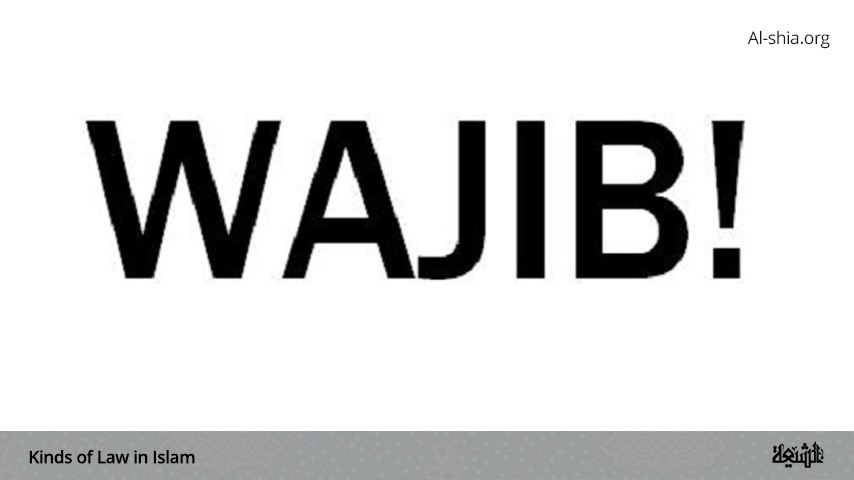 Should we track man’s daily conduct and his activities and attitudes, we will find it most difficult to count them. Every man produces hundreds of quotes and does hundreds of deeds. Within himself countless thoughts, ideas and feelings flow. For instance, he can eat, drink, sleep, marry, steal, commit adultery, kill, cheat, tell lies, pray, worship, monopolize, be kind to the destitute and orphans, laugh, become desperate, be pessimistic and optimistic, produce medicines, make tools of torture, believe in Allah, think and discover sciences and knowledge’s…etc.

It is a list of both evil and good deeds. They are not equal in respect to their benefit and harm to the individual who does them, and the society that absorbs their effects. Islam regards human activities, which are actions, sayings, ideas and feelings with due attention. Islam puts these activities into a variety of categories, and so every activity is precisely weighed and described with respect to its nature and impact on man himself.

Islam does so to show the path before man and put forward a criterion by which man evaluates his activities, develops them, and steers himself clear from evil and crime. Man is also urged to mobilize his energies in the domain of good and constructive works and preserve them from being dissipated and lost. These energies granted to man by his Creator are not to become tools of destruction and sources of calamities and torture to man.

The ultimate goal is thus, attaining Allah’s pleasure. Based on these considerations and goals, man’s deeds fall into five categories, where every activity is valued according to its positive or negative effects on man and his varied relationships. These categories, as stated by the scholars are:

3- Disapproved but not unlawful (Makruh)

It is an act in which a sane person (Mukallaf) who has reached puberty has full freedom to do it or leave it aside. Within the circle of permission, such a person is never asked about what he does or leaves for the permitted actions. Examples of permissible acts are countless and innumerable in the life of a man. For instance, a mukallaf is free to choose the work that best suits him/her.

He is free to do research and think about the sciences of nature and life. He is free to select the suitable system to run the social and political offices and establishments; to determine the food, clothing, and residence he likes…etc. He is also free to use what suits his inclinations, circumstances and abilities…on the condition that all his actions should not exceed the limits and exceptions set by Islam.

It is worth mentioning that the sphere of the permitted (Mubah) is the widest among the daily social human behaviours, for all acts are, as a rule, permitted according to the most well-known religious judgment. Everything is permissible except the one forbidden by Divine law.

It is any act that the Muslim is urged to do, whereby he is viewed as a performer of the good and so deserves a divine reward and Allah’s pleasure. But no punishment is set for anyone who leaves it or considers it easy, because, if done, its fruits will be to his benefit, and if left or ignored no harm will result from it. In the life of the individual or a group, mustahabb acts are numerous.

Greeting others, paying visits to friends and neighbours, giving alms, being tidy and elegant, and many rites like dua (supplication), night prayers, fasting during the holy months of Rajab and Sha`ban, and reciting the Qur’an, are but a few examples of recommended acts. The recommended deeds in Islam uplift man to a lofty spiritual position and make him do the maximum possible acts of good in his life on earth to obtain  Allah’s pleasure in the Hereafter.

The Muslim does the recommended deeds out of a sublime moral motivation, without the slightest feelings of fear or coercion. He is propelled by love and longing to walk on the path leading to perfection and continuous enrichment in this life.

3- THE DISAPPROVED BUT NOT UNLAWFUL (MAKRUH)

Makruh could be defined as an act a Muslim,  is urged to avoid although it is not unlawful. It is preferable to avoid such acts in the interests of self or society. However, Islam does not set a punishment for the Muslim who does it, because it is not considered haram. Islam stops short of making it haram, and only urges the Muslim to avoid it, as it is likely to lead to harm or corruption.

This law is very effective in blocking the ways ending in the commission of haram acts. The exhortation to avoid the makruh is the second factor, following the urging to accomplish the mustahab, that supports the key laws of wujub and hurma in uplifting man spiritually to attain higher, sublime, spiritual stages so that he can ward off harm and danger in human life.

Examples of makruh are: urinating in stagnant water, sleeping till after sunrise, eating in a state after intercourse or sexual discharge without performing the obligatory bath, or ablutions, and making large-scale advertisements to sell something which is not so worthy…etc.

It is any act that Islam prohibits the religiously responsible Muslim, from committing, and sets the punishment for the transgressors while praising and rewarding the one who totally abstains from such acts. It is a procedure Islam takes to check the deviation that man may be led to perversion and the wrong and unnatural expression of motives and desires which are harmful to his body and soul.

It is a law which checks chaos and corruption and nips dangers and crimes in the bud. Doing the haram distances the human soul from nearness to Allah and blocks the process of sublimity. As haram action contains deep psychological, bodily, spiritual, and social risks, Islam sets both legal and social punishment for the transgressor, in addition to the severe punishment in store for him in the Hereafter.

Islam does not leave the matter unexplained. The Holy Qur’an makes it clear that the goal of forbidding certain acts is not disturbing man, depriving him, or making him deal dispiritedly with life. On the contrary, Islam aims at something else, as mentioned in the following verse:

“Say: My Lord has only prohibited indecencies, those of them that are apparent as well as those that are concealed, and sin and rebellion without justice, and that you associate with Allah for which He has sent down no authority, and that you say against Allah what you know not”.

“Those who follow the Apostle Prophet, the Ummi, whom they find written down with them in the Torah and the Evangel, (who) enjoins them good and forbids them evil,  and makes lawful to them the good things and makes unlawful to them impure things, and removes from them their burden and the shackles which were upon them; so (as for) those who believe in him and honour him and help him, and follow the light which has been sent down with him, these it is that are successful”.

Examples of haram acts are premeditated killing, usury, drinking wine, taking other people’s property by force, disseminating harmful ideas and distributing morally reprehensible books and publications, and so on.

5. THE OBLIGATORY (THE WAJIB)

It is any act that Islam makes obligatory on a mukallaf Muslim in a decisive and final way and which, under no circumstances, can he/she ignore. Islam sets the punishment for whoever leaves it intentionally, and rewards for whoever performs it perfectly. Prayer, fasting, Zakat (poor-rate), khums, jihad, ruling justly, being kind to parents, enjoining good and forbidding evil, fighting oppression and tyranny, having love and affection for the Prophet (PBUHH) and his Household, being truthful, obeying the orders of the Islamic state that rules by the Qur’an, are among the unavoidably obligatory duties in Islam.

Such duties and obligations were not ordained except for the welfare of mankind, preserving life and order, and safeguarding humankind’s security in this world and the Hereafter. Should we try to examine the laws of the obligations in Islam, study them analytically, and trace their results and practical consequences in life, we would see that they effectively conduce to balance life, preserve the order of human nature, and nurture a systematic relationship between man and his Creator on one hand and man and society on the other.

The philosophy of the obligations in Islam is based on making the Wajib a quantity in an equation whose other quantity is right and reward or punishment. What is obligatory is ordained to deepen the feeling of responsibility on the part of the Muslim, emphasize the relation between right and duty, narrow the circle of egoism and foster human conscience which opens one’s eyes to the concepts of justice and equity. Man realizes, through these duties and obligations, that every human being has the right to live, and duties to perform without which social life and the ties with Allah the Glorified, cannot be balanced.

The secret behind the Wajib and divine obligations in Islam, should we try to know, lies in the fact that man when performing such duties, adds to the chain of good, a new link which makes it more effective as it expands man’s best tendencies in his inner, and bears good fruit through interaction between the human self and the surrounding environment. Such results can be regarded as a criterion by which man’s intentions are measured, and be the basis for his reward or punishment.

If the original law is amended by any accidental cause then the new law possesses the same legitimacy the original one had. It is an indivisible religious obligation that the responsible Muslim has to perform or be given the choice of performing or leaving it according to the nature of the law. If fasting, for instance, is obligatory under normal circumstances, it is haram for the sick to fast. Then fasting is, in this case, legitimately haram in a decisive way. If the sick person fasts, his action is not legitimate but is haram and ensues some consequences set and explained by Islam.