The Qur’an and Imamate 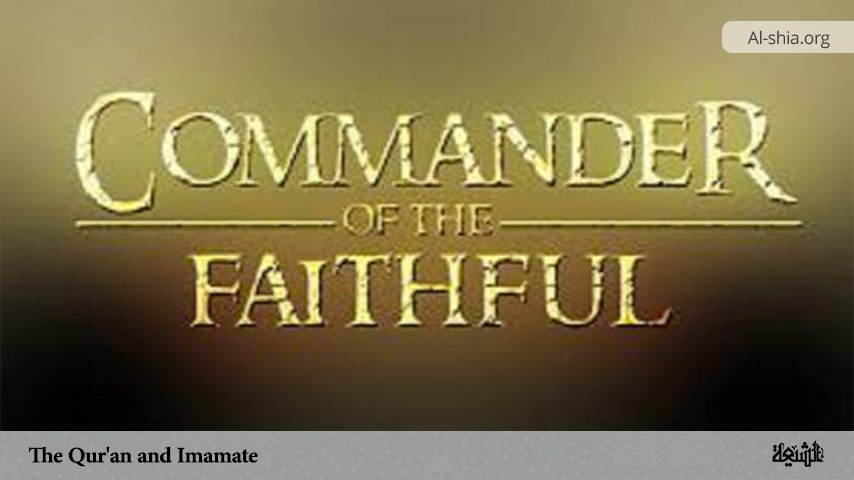 The Qur’an, this great heavenly Book of ours is the best guide in all areas and in the area of Imamate (i.e., leadership) as it presents the issue from its various dimensions.

1. The Qur’an says that Imamate comes from Almighty Allah

In the story of Abraham, peace be upon him, the Qur’an refers to the state of Imamate and leadership of Abraham,  to follow the stage of prophethood. After Divine mission and passing the difficult tests presented to him, it says: “And remember that Abraham was tried by his Lord with certain commands which he filled. He said, ‘I will make you an Imam to the nations.” (1)

The Holy Qur’an and various histories show that he attained this stage after struggling with the idol worshippers of Babel, his migration to Damascus, his building of the Ka’bah and taking his child, Isma’il to the place of sacrifice.

If prophethood and the Divine mission must be determined by Allah, Imamate and leadership must also be determined by Allah for it relates to all aspects of the human being and it is to help direct them towards perfection. This is not something that people may do. The Holy Qur’an says: “I will make You an Imam to the nations.” (2)

In another verse, it says: “And We made them leaders guiding (men) by Our Command and We send them Inspiration” (3)

Similar to this, it can be shown in other verses of the Qur’an that Allah must select Imam and beyond this, at the time when we read that Abraham asked that his offspring be included, he was told: “But My promise is not Within the reach of wrongdoers.” (4)

It says that his prayer will be answered but those who had committed oppression would never reach this high station. Noting the fact that an oppressor, both in the meaning of the word as well as the logic of the Qur’an, has an extensive meaning, including the clear and hidden sins of polytheism and any kind of oppression against other people and noting that only Allah can know this in a complete and perfect way because only Allah is aware of what goes on inside people, it is clear that only Allah can select the person for this stage.

2. The verse on Preaching the Mission

“O, Prophet, Proclaim the (Message) which has been sent to thee from your Lord. If you do not, you would not have fulfilled and proclaimed His Mission. And Allah will defend you from men (who corrupt) for Allah guides not those who reject Faith.”(5)

The tone of this verse shows that the assignment is a heavy one which has been placed upon the Prophet’s shoulders. He was anxious about the mission which might possibly meet up with opposition from the people. Thus the verse tells the Prophet that Allah commands the endeavours to have Islam be better understood and give him security and that he will be protected.

This important issue clearly does not relate to monotheism and polytheism in the struggle with the enemies from among the Jews and hypocrites, etc. because, at the time of the revealing of this verse, this issue had been completely solved. And, also, the announcing of the normal precepts of Islam did not have these dangers. From the external interpretation of the verse, it can be seen that it was a command which was of the same weight as the Divine mission. That is, if endeavours were not made, the truth of the Divine mission would not have been expressed.

Can this command, then, be anything other than the selection of the successor to the Prophet? In particular, since the verse was revealed at the end of the life of the Holy Prophet and it relates to the issue of the caliphate, which is the continuation of the issue of prophethood and the Divine mission of the Holy Prophet. In addition, there are many Traditions recorded from a large group of the Companions of the holy Prophet including Zayd ibn Arqam, Abu Sa’id Khudri, ibn ‘Abbas, Jabir Abdallah Ansari, Abu Hurayrah, Hudaifah and ibn Masud.

Some of these Traditions have come to us through eleven ways and a large number of them are from the Sunni scholars, both – those who transmit the Traditions, historians as well as recorders who say that the above verse was about ‘Ali, peace be upon him, and that it was revealed on the day of Ghadir. (6)

We will discuss the events of Ghadir, with the Will of Allah, in the section on Traditions but here we will simply remind ourselves that this is a clear sign because the Prophet of Islam was duty-bound to announce on the return from his last hajj and at the end of his life that he had officially selected ‘Ali, peace be upon him, as his successor and introduce him to the people.

3. The Verse on Obedience to the Commanders

“O you who believe! Obey Allah and obey the Prophet and those charged with authority among you…” (7)

This does not agree with any kind of logic because most of the leaders, in various ages, were deviated, polluted, affiliated and oppressive. Does this verse say to obey the rulers upon the condition that they are not rulers against the precepts of Islam? This also does not fit with the generalization of the verse.

Does it mean that they are only to obey the Companions of the Prophet? This also does not agree with the extensiveness mentioned in the Holy Qur’an to include all ages and times. Thus we can conclude that which is meant by the infallible leaders who exist in every age and in every era, the obedience of whom is unconditional and obligatory and his commands, like the commands of Allah and the Prophet, must be carried out.

There are many Traditions in Islam in this area and the fact that those charged with authority have been related to ‘Ali or the infallible Imams is further proof of this. (8)

4. The Verse of Leadership (Wilayat)

“Your (real) leaders are (no less than) Allah, His Apostle and the (fellowship of) believers those who establish regular prayers and regular charity when they bow down humbly (in worship).”11

The Qur’an relies upon the word Imamah which in Arabic refers to exclusiveness: the Wali and leader of the Muslims is exclusive to three people: Allah, the Holy Prophet and those who have found faith and who pay the zakat at the time of the ruku’. There is no doubt that what is meant by leadership is not the friendship of Muslims with one another because friendship with one another does not need to have the word unconditional added to it.

All Muslims are friends with each other even though, at the time of the ruku’, zakat is not paid. Thus wilayat’ here means spiritual and material leadership, in particular, since it is placed alongside the wilayat of Allah and the wilayat of the Prophet. This point is also clear that the above verse, with the situation in which it appears, refers to a particular person who has paid the zakat while in the state of ruku’ because otherwise, it is not necessary that one pay the zakat while in that state; this is a sign, not a description.

The totality of this, then, shows that the above verse refers to the meaningful story of ‘Ali, peace be upon him, in particular, since he was in the midst of the ruku’ when a needy person came to the mosque of the Prophet to seek help. No one answered the needy person but in that state, ‘Ali, peace be upon him, with his right hand, indicated his finger with a ring on it. The needy person took the valuable ring. The Prophet saw what was going on with the corner of his eye.

After his ritual prayer ended, he raised his head and said, “Allah! The brother of Moses has asked that you extend his spirit and make things easy for him and cut the difficulty of his tongue, and have Aaron be his helper and assistant…

O, Allah! I am Muhammad, the Prophet, and the person you selected, opened my chest and made my work easy and from among my family, have ‘Ali be my helper so that through him, my back will be strong and firm…”. The Prayer of the Holy Prophet had not as yet ended when Gabriel appeared and revealed the verse above.

It is interesting to note that many of the recorders of the Traditions who are famous Sunnis, and their historians and commentators, say that this verse refers to Hazrat ‘Ali and more than 10 of the Companions of the Holy Prophet. There are many verses about wilayat but we have only mentioned four verses in relation to this issue.