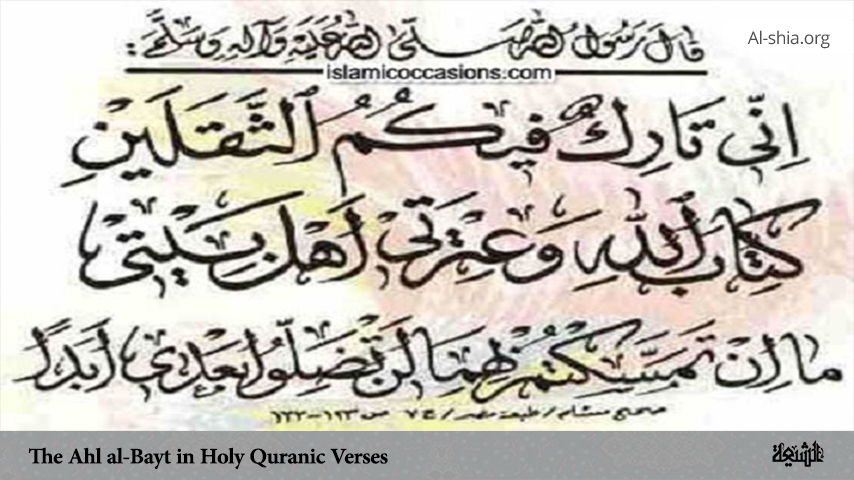 The Ahl al-Bayt are the Godly ones of the family of the Holy Prophet Muhammad (PBUHH) whom the Muslim world as a whole unanimously acknowledges as their pure personalities and considers them as Holy ones, purified by Almighty God Himself. The Almighty Allah has bestowed His trust on the Prophet Muhammad, and his descendants (Peace Be Upon Them), who are the strongholds of His commandments. From where they are expounded and interpreted, they are the fountain heads of knowledge created by Him, shelters for His teachings, forts for Heavenly Books, and lofty Citadels to defend His religion. Islam needed help and support, By them, Allah made Islam strong and powerful. Regarding the claim, Holy Qur’an says:

“When they had been patient and had conviction in Our signs, We appointed amongst them imams to guide [the people] by Our command” (32:24).

“It is He who made the stars for you, so that you may be guided by them in the darkness of land and sea. We have certainly elaborated the signs for people who have knowledge (6:97).

“As the stars in the sky are the Source of guidance to the travellers, The Holy Ones of my Ahlul-Bait (The Twelve Imams on my Progeny) are The Source of Guidance for the people. And, as the stars will remain in the sky until The Day of Judgment, The earth will never be without a Divinely Guide from My Ahlul-Bait, that is an Imam”.

“The faithless say, ‘Why has not some sign been sent down to him from his Lord?’ You are only a warner, and there is a guide for every people”(13:7).

The Holy Quran says in this regard:

“It is He who has sent down to you the Book. Parts of it are definitive verses, which are the mother of the Book, while others are metaphorical. As for those in whose hearts is deviance, they pursue what is metaphorical in it, courting temptation, and seeking its interpretation. But no one knows its interpretation except Allah and those firmly grounded in knowledge; they say, ‘We believe in it; all of it is from our Lord.’ And none takes admonition except those who possess intellect”.(3:7).

“Indeed, it is [present as] manifest signs in the breasts of those who have been given knowledge, and none contests Our signs except wrongdoers” (29:49).

“Guide us on the straight path– the path of those whom You have blessed — such as have not incurred Your wrath, nor are astray” (1:6-7).

“…Indeed Allah desires to repel all impurity from you, O People of the Household, and purify you with a thorough purification” (33:33)

“O you who have faith! Obey Allah and obey the Apostle and those vested with authority among you. And if you dispute concerning anything, refer it to Allah and the Apostle, if you have faith in Allah and the Last Day. That is better and more favourable in the outcome” (4:59).

The Highest degree of purity means to be kept constantly away from all the causes of impurity. This is termed as the State of Infallibility in Knowledge, character and action. It could have been applied generally to the whole of mankind who are keeping aloof from all the impurities as The Word of Allah Commands. But, Almighty Allah expressively has confined His order to a certain group of individuals by excluding the rest of mankind from it in His Divine Will by declaring the ‘Ahlul-Bayt’ as the persons purified by Him to be constantly in touch with the Qur’an in its original, hidden, well protected, exalted and purified form. It was Allah’s Wish to remove all blemishes from them: “…Indeed Allah desires to repel all impurity from you, O People of the Household, and purify you with a thorough purification” (33:33)

The commandment to love Ahlul-Bayt

In this last word of Allah (Qur’an), The Holy Prophet is being commanded to ask the believers to love his kith and kin (that is his Ahlul-Bayt) and that would be the return of his apostleship. “Such is the good news that Allah gives to His servants who have faith and do righteous deeds! Say, ‘I do not ask you any reward for it except the love of [my] relatives.’ Whoever performs a good deed, We shall enhance its goodness for him. Indeed Allah is all-forgiving, all-appreciative.” (42:23).

And after returning from the city of Mecca during his farewell Pilgrimage (Hajjatul-Wida) at a place called Ghadir e Khumm, this verse was revealed to The Holy Prophet Muhammad, which occupies a very important and leading position in the Holy Qur’an and forms a very vital part of the Word of God: “O Apostle! Communicate that which has been sent down to you from your Lord, and if you do not, you will not have communicated His message, and Allah shall protect you from the people. Indeed Allah does not guide the faithless lot” (5:67)

Acknowledgement of Ali as the Successor

History reports how the Holy Prophet stopped the caravan and delivered a long sermon before a mammoth assembly of thousands of pilgrims and he was standing there to convey the Message to the Muslims and to perform the duty he was ordered to perform. Continuing the sermon, he said:

“O people! Shortly I shall be called (to Heaven), I am leaving amidst you, two most precious things, worthy of obedience, THE BOOK of ALLAH (THE HOLY QUR’AN), and ‘MY AHLUL-BAYT’ (The members of his family, Ali and Fatima and their descendants), Should you be attached to these two, never shall you get astray after me, for verily these two will not separate from each other until they meet me at the Fountain of Kawsar (Paradise).”And then he called Ali Ibn Abi Talib raising his hand with the miraculous strength of his apostolic arms declaring:

‘Man kuntu Mawlahu fa haaza Aliyun Mawlahu’ that is: Whomsoever I am the Mawla,(Lord, Master), this ALI is his Mawla. And declared him as the Commander of the faithful. (Ameer ul Mumineen). Then the Prophet said, “Go now, and let those who have been present here today repeat and convey to those who are absent all that they have seen and heard.”

Approval of The Religion

And immediately after this historic event, the Divine revelation again descended revealing:

O mankind! The Apostle has certainly brought you the truth from your Lord. So have faith! That is better for you. And if you are faithless, [you should know that] to Allah indeed belongs whatever is in the heavens and the earth, and Allah is all-knowing, all-wise (4:170).

“We made them imams, guiding by Our command, and We revealed to them [concerning] the performance of good deeds, the maintenance of prayers, and the giving of zakat, and they used to worship Us” (21:73)

Since the Ahlul-Bayt carries as much weight in the eyes of Allah as the Holy Qur’an, the former has the same qualities as the latter. Just as the Qur’an is true from beginning to end without the shadow of untruth in it, and just as it is incumbent (duty) of every Muslim to obey its commands, so also must the Ahlul-Bayt be perfectly true and sincere guides whose commands must be followed by all. Therefore, there can be no escape from accepting their leadership and following their creed and faith. The Muslims are bound by the sayings of the Prophet to follow them and no one else.

“Indeed those who have faith and do righteous deeds—it is they who are the best of creatures.”(98:7)

These are none but our Infallible Imams.