Sunni Feedback on the Issues of Infallibility and Ahlul-Bayt 4 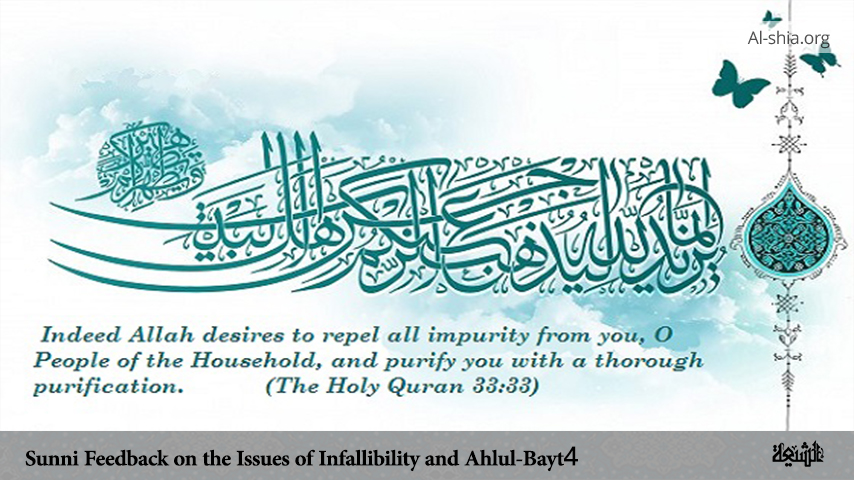 In this part of the article titled “Sunni Feedback on the Issues of Infallibility and Ahlul-Bayt”, we continue with a reply to the comments of the Sunni brothers on the infallibility of Ahlul-Bayt.

The term “Those who are firmly grounded in knowledge” refers to Ahlul-Bayt. In fact, Ahlul-Bayt are the “living Quran” In another verse, Allah states: “Ask the people of Reminder (the possessors of the Message, i.e., Quran) if you do not know.” (1) Again this is referring to Ahlul-Bayt. Ahlul-Bayt knows the internal meaning/ commentary of the Quran which was revealed to the Prophet along with the Quran but were not a part of the Quran. These pieces of information are hidden but to the purified ones: None touches (the depth of meaning of the Quran) save the purified ones. (2) Please refer to the article titled: “Quran and Ahlul-Bayt” in which we quoted authentic traditions from the Sunni sources where the Messenger of Allah declared that the Quran and Ahlul-Bayt are non-separable. Regarding the necessity of following Ahlul-Bayt, a Wahhabi mentioned: No thanks I am not a Christian, I only obey God and he is my saviour. not Christ, not Ahlul-Bayt.

This reminds me of what Imam Ali said to al-Khawarij when they said what is highlighted above! Imam Ali commented: “kalimatu haqqin yuridu biha al-batil” (a word of truth, but falsehood was meant by it). I should even say that there is no truth in what you said. Do you believe in Quran, or do you say you only follow God and not Quran?! If you are a true believer in Quran, then read the following verse please: “O’ you who believe! Obey Allah, and Obey Apostle and those from among you who are given authority (by Allah).”(3)

Allah tells you to obey His Messenger and His Ulul-Amr (Imam), but you say you ONLY obey Allah! Khawarij said exactly the same thing! Don’t you reflect? You insist to ONLY obey Allah while Allah orders you to obey others also. If you come down and say (for heck of it) you also obey the Prophet, then according to the most authentic traditions the Prophet orders you to OBEY Ahlul-Bayt. But you mentioned you do not obey them. What kind of rhetoric is this? You said you are not Christian. Do you think if you obey the Prophet and his Ahlul-Bayt, you will become Christian? Exalted be Allah (SWT) from such ignorant and stupid allegations against His commandments by people who lack all knowledge! You are mixing apples and oranges, my friend.

Christians believe that Jesus went on the cross to save them. Therefore, if they commit any sins, they are already forgiven by Christ. And in this way, they do what they wish to do. However, to your surprise, the Shia think exactly the other way around. They say: “The Prophet ordered you to OBEY him and his Ahlul-Bayt. The most important books of the major Islamic schools testify to this fact. If you do not OBEY them you will be doomed to Hell.” Do you see the difference? Christians say you do not really have to obey to be saved. It is enough if you believe in Jesus. However, Prophet Muhammad (PBUHH) said that you should obey Ahlul-Bayt to be saved from Hell.

A person who calls himself a Shia, but does not really obey the instructions of Ahlul-Bayt, is not any better than a Christian. As I mentioned, true love requires the person to obey the one who loves. If one claims the love of Ahlul-Bayt, but he does not obey their instructions, then he is only fooling his own soul. Ibn Abbas (RA) narrated that the Messenger of Allah said: “Whoever wishes to live and die like me, and to abide in the Garden of Eden after death, should acknowledge Ali as WALI after me, and take his WALI (i.e., Imams after him) as WALI, and should follow the Imams after me for they are my Ahlul-Bayt and were created from my clay and are gifted with the same knowledge and understanding as myself. Woe unto those who deny their virtues and those who disregard their relationship and affinity with me, for my intercession shall never reach them” (4).