Sunni Feedback on the Issues of Infallibility and Ahlul-Bayt 3 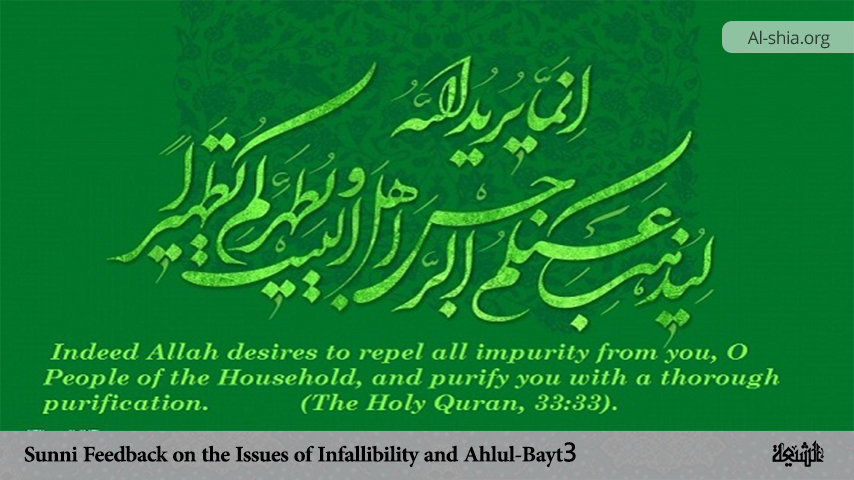 In this part of the article titled “Sunni Feedback on the Issues of Infallibility and Ahlul-Bayt “, we continue with a reply to the comments of the Sunni brothers on the infallibility of Ahlul-Bayt.

Another contributor commented that if based on Sunni references we quoted, Ahlul-Bayt are the Prophet, Fatimah, Ali, al-Hasan and al-Husain, then how can you include the nine descendants of al-Husain?
As we have already pointed out, only five members of Ahlul-Bayt were alive at the time of the Prophet (PBUH&HF). They were Prophet Muhammad, Lady Fatimah, Imam Ali, Imam al-Hasan, and Imam al-Husain. They were mentioned as Ahlul-Bayt by the Prophet (PBUHH) and the most important Sunni collections testify to this fact. However, the nine descendants of Imam al-Husain were not alive at that time so that the Prophet could not cover them by his mantle! But the Prophet did, in fact, mention their names and their numbers. Let us review some traditions from Sihah Sittah: The Prophet (PBUHH) said: “al-Mahdi is one of us Ahlul-Bayt.” (2)

Also, the Prophet (PBUHH) said: “The Mahdi will be of my family, of the descendants of Fatimah (the Prophet’s daughter) (3). By the above traditions, the Prophet extended Ahlul-Bayt up to Imam al-Mahdi (AS). So Ahlul-Bayt are not just those five, and Imam al-Mahdi is the last member of Ahlul-Bayt, but he was not born at the time of the Prophet so that he could take him into the Cloak as well! Also, the messenger of Allah said: “There shall be twelve Imams/Caliphs/Amirs for my nation” (4).

These 12 Imams will cover till the day of resurrection as Sahih Muslim testifies. The last of them is surely Imam al-Mahdi (AS) who will appear in the last days and who is also from Ahlul-Bayt as the above tradition specified. There are other traditions in the Sunni collections in which the Prophet (PBUHH) has even mentioned the name of all these twelve individuals one by one. (see Yanabi’ al-Mawaddah, by al-Qundoozi al-Hanafi).

Referring to the tradition narrated by Aisha where the Messenger of Allah named the members of his house, a Sunni brother commented that Aisha is by no means a trusted source of Hadith for the Shia. Then why do the Shia take her narration in this instance? The first part is true. The Shia believe that all the narrators in the chain of a document should have been just. If Aisha used to argue with the Prophet, and keep him angry for the whole day, or led the battle of Camel (the first civil war) then we consider these as BIG injustice. If any narrator has done any injustice in history, their narrations are void for us UNLESS the same tradition has been narrated via another chain of authorities who are all trustworthy.

Thus, some of the traditions of the six Sunni collections fall in this category, i.e., accepted for us. Although Aisha is not a trustworthy narrator in the opinion of the Shi’ites, any part of his narrations that has also been transmitted by trustworthy narrators such as Umm Salama (who also, by the way, reported the tradition of Cloak), will be accepted. All those traditions which we quoted from Sunni sources in support of the Shi’ite views, fall in this category, and we believe in them. Moreover, the reason that we brought up the tradition of Aisha is that this is a tradition which is reported in Sahih Muslim and the Sunnis cannot dispute its authenticity.

As we have pointed out, following Ahlul-Bayt means to inquire about the Sunnah of the Prophet (PBUHH) only through them. In fact, Ahlul-Bayt are THE MEANS of identifying the true Sunnah of the Prophet from the innovations. No doubt that the Prophet (PBUHH) explained all the fundamentals of the religion. However, people around him did not benefit from his knowledge equally. We have only one Companion whom the Prophet called him the Gate of the City of Knowledge. Others got their knowledge based on their capacity. The major duty of the Imams of Ahlul-Bayt was to PRESERVE the Islamic teaching in its true spirit and reject the innovations and mutilation of the religion.

The deputies/successors of the Prophet don’t bring any new massage, and they just serve as leaders (Imams), Guardians for their true followers. They explain/ elaborate Shari’ah (Divine law) for people. They clear up confusing things and events that may happen in each era. In addition, they are the only individuals who can be trusted for the correct interpretation of the Qur’anic verses as pointed out in the Qur’an and the traditions of the Prophet (PBUHH). Adhering to Qur’an is not enough to guarantee our survival, because Qur’an only specifies very general rules, and has lots of ambiguous (Mutashabihat) verses which only Ahlul-Bayt know its true meaning: He is Who has revealed unto thee (Muhammad) the Scripture wherein are clear revelations, which are the Essence of the Book, and others (verses which are) ambiguous. But those who have sickness in their hearts follow the part of which that is ambiguous, seeking discord and searching for its hidden meanings, but no one knows its hidden meanings except Allah and those who are firmly grounded in knowledge who say: We believe therein; the whole is from our Lord, but only men of understanding really heed (5).