Sunni Feedback on the Issues of Infallibility and Ahlul-Bayt 2 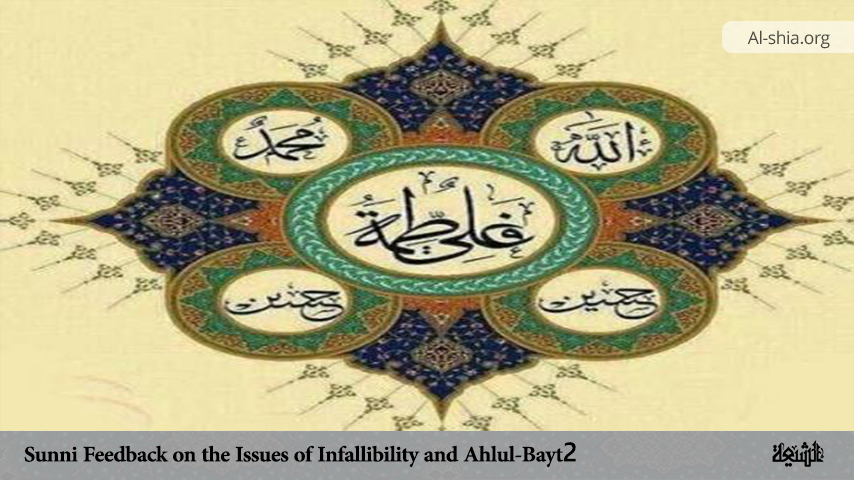 In this part of the article titled “Sunni Feedback on the Issues of Infallibility and Ahlul-Bayt “, we continue with a reply to the comments of the Sunni brothers on the infallibility of Ahlul-Bayt.

If Allah threatened Aisha and Hafsa by divorce because they backed each other against the Prophet (PBUHH), then how can we render them as pure? The verse of the Qur’an tells us that Ahlul-Bayt are perfectly pure. According to the traditions in Sahih al-Bukhari, Hafsa is swearing by Allah that she argues with the Prophet (PBUHH) and keeps the Prophet angry for the whole day. Umar is advising her not to imitate Aisha who is proud of her beauty! Are these attitudes signs of perfect purity mentioned for Ahlul-Bayt? Perhaps you might want to also look at the history, and see who rode the Camel and allowed the shedding of the blood of ten thousand Muslims.

I also would like to remind you there have been some Prophets in the past that some of whose wives were not pious. Among them are the wife of Prophet Noah, the wife of Prophet Lot, and so on. Allah informed those prophets that those wives who don’t follow your instructions are not related to them and they will perish along with the rest of the people. None of those Prophets took it as an insult. I also would like to say that it happened to me when I heard from a Sunni Muslim claiming that Shia believe that Aisha committed adultery! (May Allah protect us). This is a false accusation. Shias do not attribute such a thing to any of the wives of the Prophet (PBUHH). The problem of the Shia with Aisha is mainly around the line of politics and her hostility toward Ahlul-Bayt. A naive contributor mentioned that: It is reported on the authority of ‘Akrama that Ibn Abbas said this verse (33:33) is addressed to the wives of the Prophet.

There is no denial to the fact that the above report exists in some Sunni books. Such reports also indicate that Ikrama even had the audacity to yell in public places that the verse was revealed only for the wives of the Prophet (PBUHH). But the issue doesn’t stop here, and it is important to look at the very personalities of those individuals involved.

Surprisingly, al-Dhahabi wrote in his work: The very first reason to reject the tradition(s) of Ikrama is based on the fact that he was Kharijite. Secondly, his being a Kharijite, he even justified the killings of fellow Muslims (1).
Ibn Hajar al-Asqalani quoting from Ahmad Ibn Hanbal and others wrote: In the season of Hajj, Ikrama came to Africa, and said: It would be very dear to me if I were at Hajj at this moment, I would have had swords in both my hands, and I would massacre the Muslims. After these statements by Ikrama, the people of Africa avoided him. Ahmad Ibn Hanbal says: Ikrama narrates contradictory Hadiths. Yahya Ibn Sa’id Ansari says: Ikrama is a compulsive liar (2).

In fact, Ikrama was a slave of the son of Ibn Abbas. Abdullah Ibn Harith reported: I once went to Ali Ibn Abdullah Ibn Abbas, and I was surprised to see that Ikrama was tied to the restroom. I said to Ali: Is this how you treat your slaves, and he replied: Ikrama associates many lies to my father (Ibn Abbas) (3). At this point, it would be nice to quote another report which is also falsely attributed to Ibn Abbas: Abul Qasim Abdurrahman Ibn Muhammad Siraj says: it is related through Muhammad Ibn Yaqub, through Hasan Ibn Ali Ibn Affan through Abu Yahya al-Hamani through Saleh Ibn Musa al-Qurshi through Khaseef through Sa’id Ibn Jubair through Ibn Abbas that verse 33:33 was revealed for the wives of the Prophet (4). The scrutiny of the above tradition by the Sunni scholars yields the following facts about three individuals in the chain of authorities of the above report: Imam al-Nisa’i says: Abu Yahya al-Hamani (one of the narrators in the chain) is not a reliable reporter (5).

Ahmad Ibn Hanbal says: Sa’id Ibn Jubair (one of the narrators in the chain)is not an authority and this Hadith is not a reliable Hadith. Abu Hatem Salah says: He has a weak memory and tends to mix up Hadiths.

Al-Dhahabi writes: Khaseef Ibn Abdurrahman (one of the narrators in the chain) is the slave of the Umayyad, but he has a weak memory and Ahmad has declared him as weak (6). A contributor claimed that there exists a tradition narrated by both Shia and Sunni which reads: “al-Salmanu minna Ahlal-Bayt” and translates to: “Salman (al-Farsi) is one of us, Ahlul-Bayt”. This contradicts the Shi’ite doctrine that Ahlul-Bayt are some selected individuals from the progeny of the Prophet (PBUHH). My comment is: Yes, there is a tradition with the above-mentioned Arabic words.

However, the correct translation is as follows: The Messenger (PBUHH) of Allah said: “Salman is from us Ahlul-Bayt”, which means he is our agent and is attached to us Ahlul-Bayt. In fact, Salman was an agent and a trustee for Ahlul-Bayt to the end of his lifetime. His affinity to Ahlul-Bayt was to the extent that he was attached to them. An analogy would be a friend who would visit a family a lot, such that one would consider him attached to the family, although the blood relation is the only thing missing. Salman (RA) was one of the best companions of the Messenger of Allah. It is narrated that: The Messenger of God said: “Certainly Allah commanded me to love four persons and informed me that He loves them.” The companions asked the Prophet: “O’ Messenger of God, who are those four persons?” The Prophet (PBUHH) replied: “Ali is from them (repeating that three times), Abu Dhar, Salman al-Farsi, and Miqdad” (7).

Notice that the Prophet (PBUHH) said, “Salman is from us Ahlul-Bayt”. This does not necessarily mean that “Salman is one of us Ahlul-Bayt”. The Arabic word “min” has different meanings. In the above tradition (about Salman) as well as many other traditions “min” does not mean “one of”. For instance, al-Bukhari recorded that: The Prophet (PBUHH) said to Ali: “You are from me, and I am from you” (8). There is no mention of Ahlul-Bayt here. So if we suppose that the only meaning of “min” is “one of”, then the saying of the Prophet will become: “Ali is one of me and I am one of Ali”. What a beautiful translation! How many persons is the Prophet, so that one of the Prophets is Ali? The more funny phrase in this translation is the latter part, that is, the Prophet is one of Ali!