Sunni Feedback on the Issues of Infallibility and Ahlul-Bayt 1 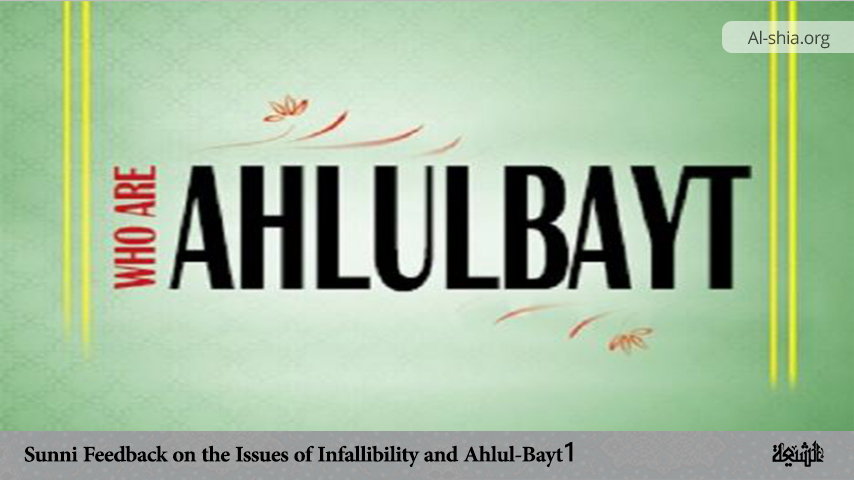 In this article, we reply to the comments of the Sunni brothers who studied the previous articles regarding to who Ahlul-Bayt are, and why they are infallible. More discussions on the issue of infallibility will be presented later in the next discussion. A Sunni brother mentioned that the verse (33:33) expresses the decision of Allah to purify Ahlul-Bayt and make them spotless. How could this imply that they are flawless/sinless? This is adding an incorrect implication to the Arabic language!

To answer this question, we would like to ask: Isn’t sin a kind of impurity? A person who commits sin is not a pure person. If you think this is adding an incorrect meaning to the Arabic language, then I would ask you to quote one example where a scholar of the Qur’an, Arabic grammar, and literature claims that committing sin is a sign of purity!!! Also, based on your translation, you used the word “spotless”. Then what will be the difference between “spotless” and “flawless”? Any spot is a flaw and is a sin; and vice versa. Moreover, which scholar of the Arabic language can we find better than the Messenger of Allah? We quoted from the authentic Sunni collections that The Messenger of Allah recited “Verily Allah intends to keep off from you every kind of uncleanness O’ People of the House (Ahlul- Bayt) and purify you a perfect purification” (1). Then the Messenger of Allah said: “Thus, I and my Ahlul-Bayt are clear from sins.”

The word “thus” in the highlighted part means that the Prophet himself is concluding that the verse means Ahlul-Bayt are sinless. Is the Prophet violating the Arabic language? Another Sunni brother commented that verse 33:33 does not make Ahlul-Bayt infallible any more than verse 5:6 makes anyone who performs ablution infallible! Allah states: O you who believe! when you prepare for prayer wash your faces and your hands to the elbows; rub your heads and your feet to the ankles. If you are in a state of ceremonial impurity bathe your whole body. But if you are ill or on a journey or one of you had a call of nature or you have touched women and you find no water then take for yourselves clean sand or earth and rub therewith your faces and hands. Allah does not wish to place you in a difficulty but to make you clean and to complete His favour to you so that you may be grateful. (2)

To answer this brother, we would like to point out that purification/ cleansing has degrees and is of different types. If one hand and face become dirty, and then if he washes them with soap and warm water they will become cleansed. The above verse (3) also tells us by ablution one can become cleansed. Now if somebody argues that the degree of cleansing with ablution is not any more than cleansing the hands and face with soap, then what will be your answer to him? You will tell him that ablution make a different type of cleansing than washing the body with soap. The same goes for the difference between the cleansing of EVERY KIND OF IMPURITY and the cleansing of ablution. Surely, if a murderer makes ablution, he will not cleans his crime by that, because the IMPURITY caused by murder cannot go away by ablution even though Allah sent down verse 5:6. Qur’an never said that by ablution, you would get perfect purification.

There are different degrees of Purification. The ONLY place that Allah said I intend to do a PERFECT purification is in the verse (33:33) where He is addressing the Ahlul-Bayt. The word “PERFECT” comes from the emphasis of Allah by “Tat’hiran” which has been used ONLY in verse 33:33. This emphatic word occurs in any other place in Holy Quran. Do you see the difference brother? Do you agree that any small sin is a type of impurity? If yes, then a PERFECT purification will not leave any small sin for the Ahlul-Bayt. If Allah intends to KEEP OFF EVERY KIND OF UNCLEANNESS from Ahlul-Bayt, no impurity, no matter how small, will reach them, because Allah is omnipotent. (The phrase “EVERY KIND OF” is due to the article of “al-” at the beginning of the world “al-Rijs”).

A Sunni mentioned that saying ‘we have respect for the pious wives among the wives of the Prophet’ indicate that you consider some of them to be otherwise! This is not something strange. After all, they were non-infallible humans who may have had some or many mistakes. That’s exactly why they are not among Ahlul-Bayt. Even Quran confirms that some of the wives of the Prophet might have been wrong-doers (4).

But if you seek Allah and His Apostle and the Home of the Hereafter verily Allah has prepared for the well-doers amongst you a great reward. In the above verse, Allah states that He will only give a good reward to the well-doers among the wives of the Prophet. If all the Prophet’s wives were well-dowers, then there was no need for Allah to say this. Allah would have said, “all of you will receive a great reward”. Now, look at the next two verses after the above verse (5).

O’ Consorts of the Prophet! if any of you were guilty of evident misconduct conduct the Punishment would be doubled to her and that is easy for Allah. (6) But any of you that is devout in the service of Allah and His Apostle and works righteousness to her shall We grant her reward twice, and We have prepared for her a generous Sustenance.