The Story of Jesus in the Holy Quran 1 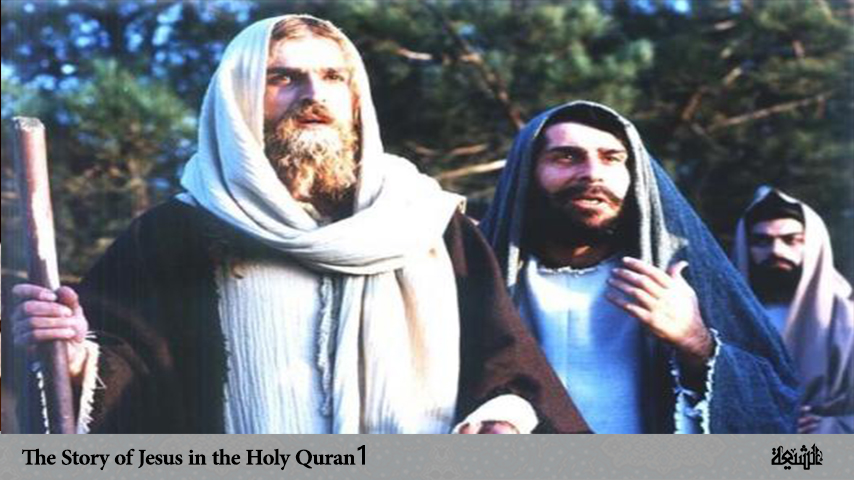 This part explores the life of Jesus Christ (Prophet Isa), his message, miracles, his disciples and what is mentioned about them in the Holy Quran.

Jesus Christ: The Prophet of Allah

In the glorious Qur’an, we read:

“The Messiah son of Mary was only a messenger (like other) messengers that had passed away before him. And his mother was a strong believer. (3) They both used to eat food. (4) Look how We make the proofs clear to them, then look how they (disbelievers) turn away.” (5) “He (Jesus) was only a servant whom We have favoured, and We made him an example to the Children of Israel.” (6)

The Message of Jesus

“O people of the Scripture, do not go to extremes in your religion and do not say about God except the truth. The Messiah Jesus, son of Mary, is only a messenger from God and a word from Him (“Be” and it is), which He sent to Mary, and a soul from Him. (8)

So, believe in God and His messengers, and do not say, “Three.” Stop, it is better for you. Indeed, God is one; exalted is He above having a son. To Him belongs whatever is in the heavens and whatever is on the earth. And God is sufficient as a Determiner of all affairs. Never would the Messiah look down upon being a worshipper of God, nor would the angels who are close (to God). (9)

And whoever looks down upon the worship of God and is arrogant, then He will gather them to Himself all together.” (10)

“This is Jesus, the son of Mary.  And this is the statement of truth, which they doubt.  It is not possible for God to take a son. Far is He above this! When He decides something, He just says to it, “Be,” and it is. (11) (Jesus said), ‘And indeed God is my Lord and your Lord, so worship Him.  That is a straight path.’ But the sects disagreed (over the straight path), so woe to the disbelievers from meeting a horrible Day.” (12)

“And when Jesus came with clear proofs, he said, ‘I have come to you with prophethood, and to make clear to you some of what you disagree about, so fear God and obey me. Indeed, God is my Lord and your Lord, so worship Him. This is a straight path.’ But the groups disagreed among themselves (about the message of Jesus), so woe to those who disbelieved from the punishment of a painful Day.” (13)

“And (remember) when Jesus, son of Mary, said, “O Children of Israel, I am the messenger of God to you confirming the Torah that came before me, and bringing the good news of a messenger that will come after me, whose name will be Ahmad (14). But when he came to them with clear proofs, they said, “This is clear magic.”(15) (16)

The Miracles of Jesus

“So she pointed to him. They said, ‘How can we speak to a child in the cradle?’ (Jesus) said, ‘Indeed, I am a servant of God. He has given me the Scripture and made me a prophet. (17)

And He has made me blessed wherever I am and has commanded me to me pray and give charity as long as I remain alive. And (has made) me kind to my mother, and did not make me arrogant or miserable. And peace be upon me the day I was born, and the day I will die, and the day I will be raised alive.” (18)

The Table Spread (of food) from Heaven

“(And) when the disciples said, ‘O Jesus, son of Mary, will your Lord send down to us a table spread (with food) from heaven?’ He said, ‘Fear God if you are indeed believers.’ They said, ‘We wish to eat from it and have our hearts be reassured, and to know that you have indeed told us the truth and that we be witnesses to it.’ Jesus the son of Mary said, ‘O God, our Lord, send us from heaven a table spread (with food) to be for us a festival for the first of us and the last of us and a sign from You. And provide for us, You are the Best of providers.’ God said, ‘I am going to send it down to you, but if any of you after that disbelieves, then I will punish him with a punishment such as I will not put on anyone else.’” (19)

Jesus and His Disciples

“Then We sent after them Our messengers, and We sent Jesus ­son of Mary, and gave him the Gospel. And We put in the hearts of those who followed him compassion and mercy. But We did not command monasticism, rather they invented it for themselves to please God with it, yet they did not observe it as it should be observed. So We gave those who believed among them their reward, but many of them are disobedient.” O you who believe, fear God and believe in His messenger, He will then give you a double portion of His mercy, and give you light by which you can walk, and He will forgive you. And God is Most Forgiving, Most Merciful. (This We say) so that the people of the Scripture may know that they have no control over God’s favour, and that (His) favour is in His Hand to give it to whomever He wills. And God is the Owner of great bounty.”(23) (24)

3. The Arabic word here indicates the highest level of faith possible, whereas the only one higher is prophethood.

4. Both the Messiah and his pious mother used to eat, and that is not a characteristic of God, who does not eat nor drink. Also, the one who eats defecates, and this cannot be an attribute of God.  Jesus here is likened to all the noble messengers that had preceded him: their message was the same, and their status as non-divine creatures of God is similar.  The highest honour that can be afforded to a human is prophethood, and Jesus is one of the five highly regarded prophets. See verse 33:7 & 42:13.

8. Jesus is called a word or a soul from God because he was created when God said, “Be,” and he was. In that, he is special, because all humans, except Adam and Eve, are created from two parents. But despite his uniqueness, Jesus is like everyone else in that he is not divine, but a mortal creature.

9. Everything and everyone else other than God is a worshipper or a slave of God. The verse is asserting that the Messiah would never claim status above that of a worshipper of God, dismissing any claim to the contrary of his divinity. And indeed he would never disdain such a position because this is the highest honour any human can aspire to.

11. If the creation of Jesus without a father makes him the son of God, then everything created like Jesus without a predecessor should be divine too, and that includes Adam, Eve, the first animals, and this whole earth with its mountains and waters. But Jesus was created like all things on this earth, when God said, “Be,” and he was.

14. This is another name of Prophet Muhammad.

16. This can refer to both prophets, Jesus and Muhammad, peace be upon them.  When they came with the message from God to their people, they were accused of bringing magic.

17. Prophethood is the highest and most honourable position a human can reach. A prophet is one who receives revelations from God through Angel Gabriel. A messenger is a prophet who receives a book from God, as well as laws to convey to his people. Jesus attained the highest honour by being both a prophet and a messenger.

24. God gives guidance to whomever He wills, regardless of background and race. And, when people believe, God honours them and lifts them higher than everyone else. But, when they disbelieve, God demotes them even though before they might have been honourable.