The Scientific Miracle of the Qur’an 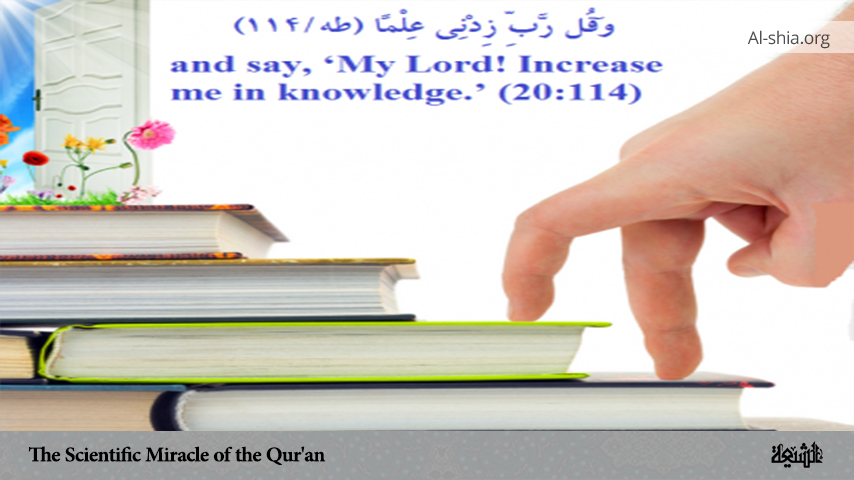 The Qur’an is definitely not a Science book, but since the Qur’an is intended to be an eternal miracle, revealed to make science and learning blossom among human beings, it is also a scientific miracle. It has expounded, in the most eloquent fashion, truths of a physical nature together with everything that touches. Although those who are not acquainted with scientific truths cannot fully appreciate its miraculousness, they can perceive the miraculous nature of the meanings and truths it contains.

a- Holy Qur’an is an everlasting Miracle

The limitation in time of the miracles performed by the earlier Prophets was an indication of the impermanence of their religions and the laws that they brought. By contrast, the miracle attesting to the prophethood of the Prophet of Islam cannot be temporally limited, because his message is universal and represents the culmination of all preceding religions; his prophethood requires an eternal miracle, a brilliant and eloquent proof of its immortality embedded with the ongoing scientific discoveries.

A permanent message must display to mankind a permanent and everlasting miracle, one which advances with time, so that just as it offered convincing proof to people of the past, it may do the same to people of the future. A short-lived miracle that is imperceptible to later generations cannot be a source of reference or judgment for the future.
For this reason, the Qur’an is presented as a permanent and everlasting miracle, the final manifestation of God’s revelation. The Qur’an itself says:

The true and well-formulated message of your Lord has now been completed, and none is able to change it. (1)

For Muslims, the miraculousness of the Qur’an is not only a matter of religious belief, but for scholars and researchers, it is a matter of scientific belief. The Qur’an possesses a remarkable comprehensiveness and richness, with respect to its worldview and scientific content, and its ability to guide not only the individual and society in the spiritual aspect but also in the realms of the natural environment and mysteries of life. There are still many matters contained in the Qur’an that call for an investigation and await discovery by further research.

Throughout the ages, mankind has undergone numerous changes and passing through repeated stages of development and growth, it has attained a more comprehensive awareness of the mysteries of creation. Nonetheless, the Qur’an has at all times retained its proud and dignified presence on the stage of human history and scientific discoveries. Dr Maurice Bucaille, the French scientist, writes as follows:

“A crucial fact is that the Qur’an while inviting us to cultivate science, itself contains many observations on natural phenomena and includes explanatory details which are seen to be in total agreement with modern scientific data… “These scientific considerations, which are very specific to the Qur’an, greatly surprised me first. Up until then, I had not thought it possible for one to find so many statements in a text compiled more than thirteen centuries ago referring to extremely diverse subjects and all of them totally in keeping with modern scientific knowledge……

Thorough linguistic knowledge is not in itself sufficient to understand these verses from the Qur’an. What is needed along with this is a highly diversified knowledge of Science…… The hypothesis advanced by those who see Muhammad as the author of the Qur’an is quite untenable. How could a man, from being illiterate, become the most important author, in terms of literary merit, in the whole of Arabic literature? How could he then pronounce truths of a scientific nature that no other human being could possibly have developed at the time, and all this without once making the slightest error in his pronouncements on the subject?

“The ideas in this study are developed from a purely scientific point of view. They lead to the conclusion that it is inconceivable from a human being living in the seventh century A.D. To have made statements in the Qur’an on a great variety of subjects that do not belong to his period and for them to be in keeping with what was to be known only centuries later. For me, there can be no human explanation to the Qur’an”.

c- Holy Quran encourages the seeking of science and knowledge

No other revealed Book praises and encourages science and knowledge, as does the Qur’an. For this reason, the Qur’an names the age of the desert Arabs, together with their pagan cultures, before Islam as the “age of ignorance.” In over a hundred verses reference is made to science and knowledge in a variety of ways, and many of these verses praise the value of scientific knowledge.

In Qur’an, God indicates the favour He has done man by bringing him out of his state of ignorance ﴾He teaches man what he did not know﴿ (2). Likewise, we read in Qur’an, ﴾God will exalt those who believe among you and those who know high ranks﴿ (3) and also says: ﴾Are those who know equal to those who do not?﴿ (4)

Besides the many verses in the Qur’an concerning knowledge, there are also countless traditions of the Prophet and the Imams on this subject which rank second only in importance to the Qur’an. In verses too numerous to mention, the Qur’an invites one to reflect upon the signs Of creation: the heavens, the shining stars and their astonishing celestial movements, and the cosmic order which rules over them all. Similarly, the Qur’an urges one to reflect upon the creation of the earth, the seas, the mountains, the desert, and the wonders contained below the surface of the earth, the difference between night and day and the changing cycle of seasons. It urges mankind to meditate on the extraordinary creation of the plants and the order and symmetry governing their growth, as well as the multiplicity of the animal kingdom.

The Qur’an invites one to witness the interdependence of beings and how all live in harmony with nature. It calls upon man also, to ponder on his own make-up, on the secrets of creation which are hidden within him, on his soul, on the depth of his perception, and his relationship with the world of the spirit.

The Qur’an commands man to travel in the world in order to witness other cultures and to investigate the social orders, history and philosophies of past people. Thus it calls man to study the natural sciences, mathematics, philosophy, the arts and all sciences available to man, and to study them for the benefit of man and the well-being of society. The Qur’an strongly recommends the study of these sciences on the condition that it leads to truth and reality, and that it produces a correct view of the world based on an understanding of God.

Knowledge, which merely keeps a man occupied and prevents him from knowing the reality of his own existence, is equated with ignorance. Allah (SWT) says in Qur’an: ﴾They know only some appearance of the life of one world and are heedless of the Hereafter﴿ (5) ﴾Have you seen him who makes his Desire his goal, and God sends him astray purposely and seals up his Heart and sets a covering on his Heart.?Then who will lead him after God (who as condemned him).?﴿ (6)

However, one important point which should be considered while discussing the Scientific miracles of the Qur’an is that: Scientific interpretations are always unstable due to the instability of the hypotheses and the theories adopted by the theoreticians. Since no hypothesis is the last one, every new invention requires a new theory for its interpretation or explanation. Therefore, scientific theories are subject to change. Like Einstein’s theory of relativity changed Newton’s physics, the results of archaeological studies cannot be taken for granted to be definite meaning. Of course, this possibility also helps us to solve some of the obscurities to some extent.

Extracted from the book titled “Authenticity of the Qur’an” by Shaikh Muslim Bhanji, published by Tabligh Centre of KSI Jamat – Daressalaam. Reproduced with permission by the Ahlul Bayt Digital Islamic Library Project team.