Science and the Muslim Ummah 3 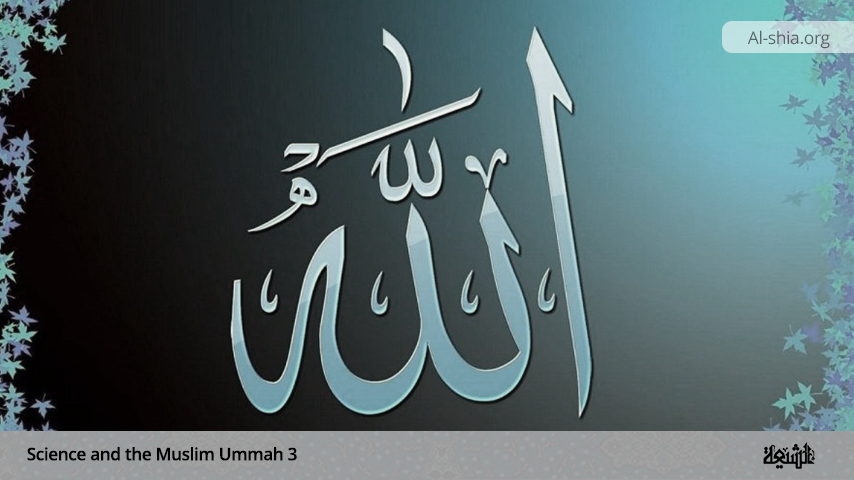 In this part of the topic “Science and the Muslim Ummah,” we shall look at the primary objective of learning, which is obtaining proximity to Almighty Allah.

Evidently, there are various dimensions to endeavour for obtaining closeness to Almighty Allah and His good pleasure. These include the obligatory worship, acquaintance with Divine teachings, refinement of one’s inner self, recognition and understanding of the signs of Almighty Allah and service of His creatures.(1)

In this context attention is drawn to the following conclusions:

1. When considered in the context of what we have mentioned above, all theological sciences are means for obtaining proximity to Almighty Allah, and the natural Sciences-since they also reveal the truth- are sacred as long as they play this role.

However, this sanctity is not intrinsic as Martyr Dr Beheshti has pointed out: “Any area of knowledge as long as it does not become an instrument in the hands of taught (non-Almighty Allah or anti-Almighty Allah) is a means of enlightenment; otherwise, knowledge may also become a means of misguidance.”

2. Viewed in this perspective, there can be no separation or alienation between various sciences. On the other hand, they help us in deciphering the book of creation, as the great mystic Shaykh Mahmud Shabistari has said: “To him whose spirit is enlightened – The entire universe is a sacred book of the Most High; – Every sphere of universe is a different chapter, – One is the Opening Surah, and another the Surah of Ikhlas.”

In the pages of this Divine book, some chapters may have prece­dence and priority over others, but nevertheless, all of them are essential for the appreciation of Almighty Allah’s signs in (horizons) and anfus (souls), that is in the universe without and within.

In the early centuries of Islamic civilization, when it was at its peak, the Muslim intellectuals approached the question of learning with a vision similar to the one discussed above. Different sciences were seen in a single perspective and considered interrelated as branches of the `tree’ of knowledge.

The goal of all sciences was seen as the discovery of unity and coherence in the world of nature. Accordingly, the source of all knowledge was considered as being one.

They utilized the experimental as well as the intellectual and intuitive approaches for understanding various levels and stages of existence.  During that period we find numerous examples of scholars who combined authority in religious sciences with an encyclopedic knowledge of the natural sciences.

Men like Ibn Sina,`Umar Khayyam, Khwajah Nasir al-Din Tusi and Qutb al-Din Shirazi are some names among many. As long as this vision and perspective ruled Muslim scholarship and science, the Muslims were at the vanguard of human civilization in those days and their cities were centres of specialized learning. (2)

George Sarton admits that during the period between A.D. 750 and 1100, the Muslims were undisputed leaders of the intellectual world and between A.D. 1100 and 1350, the centres of learning in the Muslim world retained their global importance and attraction.

After 1350, the European world began to advance and the Islamic world not only became stagnant but also failed to absorb the progress made out­side it. The theological schools excluded all natural sciences from their curriculum except astronomy and mathematics. This restriction imposed on the religious schools led to grave repercussions on the Islamic world. Here we point out a few of these effects:

1. Whereas the Europeans were striving to unravel the hidden laws of nature and to discover ways of exploiting its treasures and resources, the Muslims set aside these activities, and left to others what they deserved most to handle. Today, they have reached the point where they have to depend on America and Europe to satisfy their elementary needs. They remain largely unable to use their resources, which they continue to leave to foreigners to exploit.

2. Those Muslims who pursued the experimental sciences were mostly estranged from the religious sciences. Accordingly, they lacked the Islamic world outlook, which was replaced by the atheistic vision that dominates the Western scientific tradition.

3. The elimination of the study of the natural sciences from the curricula of the religious schools and the lack of direct touch with the sources of modern science on the part of religious scholars gave rise to the two deviated intellectual currents in the Muslim world:

a) Some Muslims, under the influence of Western scientific and technical progress and without any knowledge of the limitations of empirical sciences, became singularly possessed with them to the extent that they even tried to interpret the Qur’an and hadith according to their findings.

The Quranic exegeses written by Tantawi and Sir Sayyid Ahmad Khan belong to this class. Others have gone still further claiming that all the findings of the modern sciences are found in the Qur’an and the texts of Islamic tradition (hadith). The claim, supposedly, was aimed at demonstrating the miraculous and Divine nature of the Qur’an. (3)

In the introduction to his exegesis of the Qur’an, Shaykh Mahmud Shaltut, the late head of Al-Azhar University, writes:

“Almighty Allah did not send down the Qur’an to inform mankind of scientific theories and technological techniques. If we try to attempt conciliation between Qur’an and endurable scientific hypotheses, we will thereby subject it to reversals of times to which all scientific theories and hypotheses are prone. That would result in presenting the Qur’an from an apologetic and defensive perspective. Whatever is mentioned in the Qur’an about the mysteries of creation and natural phenomena is intended to impel man­kind to speculation and inquiry into these matters so that thereby their faith in it is enhanced.” (4)

b) Some scholars of religion have considered scientific theories as opposed to the doctrines of religion and accordingly set out to attack science. This resulted in the repercussion that many Muslims turned away from religion. Had the natural sciences not been exiled from the religious curricula, this tragedy would not have occurred.

Any fruitful criticism of ideas based on scientific theories requires, in the first place, familiarity with the various experimental disciplines within modern science, so that any unwarranted conclusions derived from scientific findings may be properly exposed and rejected.

How is it possible to claim that the natural sciences result in man’s estrangement from Almighty Allah when the Qur’an unambiguously declares:

Surely in the creation of the heavens and earth and in the alternation of night and day there are signs for men possessed of minds who remember Almighty Allah, standing and sitting and on their sides, and reflect upon the creation of the heavens and the earth: `Our Lord, Thou hast not created this for vanity. Glory be to Thee! Guard us against the chastisement of the Fire.’(5)

If the line of demarcation between religion and science is made clear, there is no reason for any conflict between these two. In fact, they would complement each other. Science is like the lamp of life and religion its guide.

We have seen how Islam has strongly emphasized the need for the acquisition of knowledge in its widest sense, and how the Muslims, following the teachings of Islam, created a brilliant civilization and were the leaders of human intellectual advancement for centuries.

We saw how the separation of religion from science in Muslim societies caused the Muslims to abandon their role in the intellectual leadership of mankind. But now that the Muslim community is showing gradual reawakening, and enthusiasm has emerged in almost every corner of the Muslim world, the time seems most suitable for taking decisive steps towards bringing about a scientific renaissance.

In this context, we call the attention of the honoured reader to the following proposals:

1. Like the scholars and scientists of the early centuries of the Islamic civilization, we should acquire knowledge of all useful sciences from others. We can liberate scientific knowledge from its attending Western materialistic interpretations and rehabilitate it in the context of the Islamic world outlook and ideology.

2. The kind of alliance which existed between religious and natural sciences during the peak days of Islamic civilization should be re-established, since, as has been pointed out, there is no separation between the ends of religion and science.

Religion teaches that all creation is oriented towards Almighty Allah as stated in the Quranic verse:

All that is in the heavens and the earth magnifies Almighty Allah, the Supreme, the All­ holy, the Almighty, the All-wise. (6)

Modern science is engaged in an attempt to unravel a comprehensive unity in the laws of nature. The present-day physicists are involved in an effort of reducing all apparently independent forces of nature to a single fundamental principle and have obtained some success in this field.

For the achievement of this goal, it seems inevitable that the latest scientific principles should be taught in theological centres, and, in the same way, religious sciences should be taught in universities on a comparatively advanced level. This will be instrumental in familiarizing Muslim research scholars with the Islamic world outlook.

Moreover, it would give the opportunity to theological schools to utilize the latest scientific findings for interpretation and elucidation of the laws of the Shari `ah.

3. For the achievement of comprehensive independence of the Islamic ummah, it is essential that all the Muslim countries take steps towards the training of specialists in all important scientific and industrial fields. Moreover, research centres should be established in all Muslim communities where the Muslim researchers can work without any anxieties or problems, and with all necessary facilities for research so that they are not forced to take refuge in atheistic environments, and as a result, compelled to put their expertise in the service of others.

4. Scientific research should be thought of as fundamentally essential and not an ancillary pursuit. The Muslims should think of it as an obligation imposed upon them by the Qur’an so that they do not come to rely on and be dependent on others.

Presently, the practice in most Muslim countries is to import the craft of assembly from Eastern and Western countries instead of making a serious attempt at fundamental scientific research. The present trend will never lead Muslim countries to scientific and technological self-sufficiency. Imported technology should be accompanied by indigenous research work.

5. There should be cooperation between Muslim countries in scientific and technological research. For this purpose, the establishment of communication links between their universities can serve as a preliminary ground. Moreover, joint research and development bodies (such as the Geneva-based CERN organization) should be formed by the Muslim countries where Muslim scientists and research scholars can come together.

There should be no nationalistic bias in this regard. Such centres were widely prevalent during the past ages of Islamic civilization. All that has been done hitherto in this connection was more or less of a preliminary nature. Now it is time for a decisive step in this direction.

1. A narration from the Holy Prophet (PBUHH) found in Nahj al-Fasahah, p. 635, says: All human beings are the family of Almighty Allah, and the most beloved of men near Almighty Allah is one who is most beneficial to His family.

2. In the thirteenth century A.D. it was Khwajah Nasir al-Din al-Tusi, who gathered scholars of various sciences in the city of Mardgheh. However, in the twentieth century, it is the Americans and Europeans who have gathered scientists from all over the world in their scientific and research institutions and furnished them with all kinds of facilities.