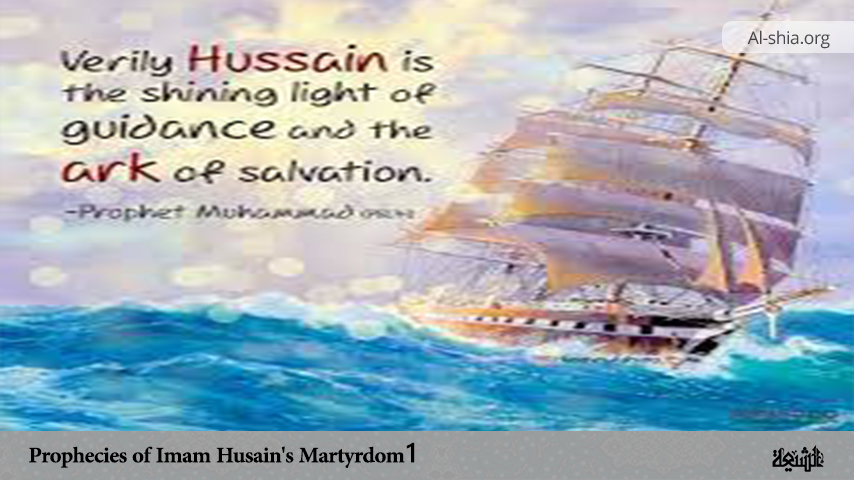 One of the miracles that testify to the veracity of the Prophet’s (p.b.u.h) claim to Prophethood is that each of his prophecies has proved to be true. The pages of history have recorded the prophecies as well as the time when these proved to be correct, so that none can refute the truth. However, some people have tried to interpret, or rather misinterpret, the prophecies. For, they could neither dare to refute the traditional reports nor could they muster the courage to refuse the occurrence of the incidents foretold. The Holy Prophet (p.b.u.h) has to his credit not a few but hundreds of prophecies that turned to be true and were witnessed by the Islamic world.

For example when Ammar was martyred during the battle of Siffin, Amr Ibn Aas paled with fear and told Muawiyah that Ammar has been killed and the prophecy of Holy Prophet (p.b.u.h) has materialized (i.e. we are the group of unjust people). Muawiyah distorted the interpretation and said that the responsibility of Ammar’s death was upon the one who had brought him to participate in the battle. When Amirul Mumineen Imam Ali (AS) was informed of this crooked logic he retorted that the Holy Prophet (p.b.u.h) had brought Hazrat Hamza (a.r.) to fight at Uhud, so (may God forbid) was he (p.b.u.h) responsible for the latter’s killing?

Another example is the augury of the Messenger of Allah (p.b.u.h) about the barking of dogs when Ayesha would go to confront Hazrat Ali (AS) in the battle of Jamal. The tragedy of Karbala is related to the successors of the Prophets and their vicegerents. Therefore, the predictions regarding this tragedy have been made since the inception of Prophethood.

Hence we see that diligent researchers have scrutinized the realms of historical records and succeeded in collecting the prophecies on the tragedy of Karbala from Adam (AS) to the Holy Prophet (p.b.u.h). History has recorded the exact words of the righteous servants of Allah. Those words that predicted the martyrdom of Imam Husain (AS) centuries before its occurrence. As it is not possible to reproduce all the prophecies here, we content ourselves with a few important ones in this article.

When Hazrat Adam (AS), the first Caliph of Allah was made to descend to the earth, he was aggrieved for having to forego Paradise. He was repentant for having forsaking a preferable act (Tark-e-Awla). Alone in such a wide world, his loneliness augmented his grief. The saddest part of it all was his separation from Janabe Hawwa. Adam (AS) repented and wept day and night, and prayed for his reunion with Hawwa. He searched for her wherever possible. During his search, he happened to pass through the land of Naynawah. When he reached there, he sobbed uncontrollably. He was restless.

His grief was shattering him. He pleaded with the Almighty Allah, “Have I committed another Tark-e-Awla? Upon reaching this land there is an increase in my grief, sorrow, restlessness and discomfort.” The Almighty Allah informed him through revelation,

“O Adam! You have neither committed a sin nor Tark-e-Awla. Rather this is the land where my righteous servant and your descendant (Husain) will be martyred. He will call out for help but none will come forward to help and assist him. His sight will be blurred due to thirst and hunger. His enemies will surround him and he will be martyred by being beheaded.” Hazrat Adam (AS) pleaded to Allah, “O Allah what should I do to reduce my grief?” Allah, the Almighty, answered him, “Invoke curse upon Yazid and the other killers of Husain (AS).” Hazrat Adam (AS) invoked curse upon Yazid due to which his sorrow diminished. He had hardly walked a few steps from Karbala towards the mountains of Arafat that he met Janabe Hawwa (1).

Divine retribution befell the people of Nuh (AS). The Great Deluge drowned the whole world. Barring a few, who were eighty-two in number and had boarded the Ark. When it reached Karbala after deflecting the force of the stormy waves, gigantic waves tossed it vehemently and it seemed to be meeting its end. Hazrat Nuh (AS) prayed to the Almighty, “O my Allah, I have cruised the whole world in my ark but the fear, sorrow and grief felt at this spot is unparalleled.”

On which Hazrat Jibrail (AS) descended and said, “O Nuh ! This is the place where the grandson of My beloved Muhammad Mustafa (p.b.u.h) and the son of the best of My vicegerents [Ali (AS)] will be martyred.” “Who will be his killer?” enquired Nuh (AS). Hazrat Jibraeel (AS) rejoined, “His killer will be Yazid who is cursed upon by the residents of the earth as well as the sky.”  Hence, Nuh (AS) began to repeatedly invoke curse upon Yazid and the ark was saved from the deadly storm.

It is narrated that once Hazrat Ibrahim (AS) was riding through the plains of Karbala when his horse tripped and fell along with its rider. The friend (Khalil) of Allah [Ibrahim] remembered his Lord and extended his hands in prayer, “Did I commit some mistake that I am punished thus?” Immediately, the trustworthy Jibrail (AS) descended and informed him, “O Prophet of Allah, you have not committed any sin. But this is the area where the descendant of Ismail (AS), the grandson of Muhammad (p.b.u.h) and the beloved son of AH (AS) will be martyred.

His name is Husain (AS).” On hearing the name of Husain (AS), Hazrat Ibrahim (AS) began to weep incessantly. Wailingly, he enquired about the assassinator. Jibrail (AS) responded, “The most evil man, Yazid. When the Qalam (pen) was ordered to inscribe upon the Lauh (tablet) the name of Yazid (l.a.), it also inscribed a curse after Yazid’s name without being ordered to do so.” The Almighty Allah was pleased by this act of Qalam and said, “You have done very well.” Hence Hazrat Ibrahim (AS) began to curse Yazid relentlessly.

Resultantly, his horse was endowed with the power of speech and it said, “Ameen” after every curse. Then the horse said, “O Friend of Allah when you fell off my back, I was very ashamed. But now I have realized that my fall was due to the omen of this evil (Yazid (l.a.).” (2)

History chronicles that the sheep of Hazrat Ismail (AS) grazed at the banks of the Euphrates river. One day, Ismail’s (AS) shepherd informed him that the animals had been refusing to drink water since the last few days. Hazrat Ismail (AS) came to the sheep and enquired the reason for their action. They responded in eloquent Arabic, “We were informed that your descendant and the grandson of the last Prophet [s.a.] will be martyred here after being deprived of water for three days. We too desire to experience his thirst.” “Who will be his killer?” asked Ismail (AS). “Yazid who is cursed by the inhabitants of the earth as well as the skies.” Hazrat Ismail (AS) too prayed to the Almighty Allah to curse Yazid (La.).