Principles of Human Rights in Islam 3 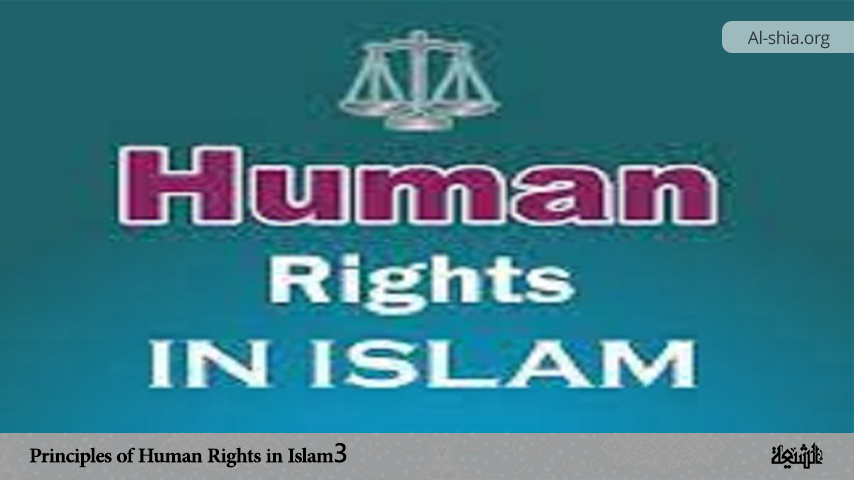 In this part of the article titled “The principles of human rights in Islam”, we shall focus on the right to freedom, and the different perspectives on freedom.

To understand the message of the prophets, it is enough to present the message by one or some of them. The reason is that the achievements of the prophet were the same in many cases. In this regard, the holy Qur’an uses shari’ah or Minhaj:

However, where there is talk of the main principles of religion, the holy Qur’an states that all prophets transmitted the same message. For instance, the al-Hijr

“The men of the Thicket cried lies to the envoys when Shu’ayb said to them, will you not be God-fearing?” (3)

We all know that the people in both places had then one prophet. That the Holy Qur’an condemns the people’s rejection of the Envoys shows that all the prophets had one single message.

Another sign of this truth is that every prophet confirms the words of the preceding prophets. This was one of the characteristics of the prophets which shows that the main axis of the prophets’ messages was the same:

“And We have sent down to thee the book with the truth, confirming the Book that was before it, assuring it.” (4)”(5)

Now we shall consider one of these messages by Moses. After bidding the people to worship the one God, that great prophet cried for freedom to them. This message was not for the freedom of the land and the economic resources of Egypt. The purpose was to free the Egyptians from the bondage of falsity. Of course, if people are freed, economic resources will surely be freed. This was the message of Prophet Moses:

Pharaoh’s followers answered that they would not surrender to those who were their own servants. It is clear that he did not mean that he was the Lord of others. Pharaoh said,

However, he did not mean that he was the master of other affairs. Pharaoh and his followers were idolaters. For the same reason. Pharaoh’s followers told him.

“Will you allow Moses and his followers to ignore your Lord?” (8)

Hence, Moses demanded the freedom of others from this servitude,

“That is a blessing thou reproaches me with, having enslaved the Children of Israel.” (9)

So, Moses meant that it is not fit to worship anyone but God and that all human beings should be free from this bondage and that they should not follow man-made rules.

In the works of the Innocent Imams, the message of freedom is clearly discernible. The most obvious document in this regard is Nahj al-Balaghah where Imam Ali addresses his son, Imam Hasa Mujtaba, “Be not servant to anyone but God, for He has created you free.” (10)

As is seen in this statement, true freedom lies in breaking from any servitude but from God. For the same reason, Imam ‘Ali finds his honour in this kind of freedom, “O God, it suffices me to be Thy servant; this is a great honour for me to have Thee as my Lord.” (11)

As pointed out, freedom lies in freedom from the servitude of others but Allah. However, the proponents of other schools believe that freedom lies in man’s capability to choose anything. In their eyes, man is free to choose any religion he desires, for they regard religion as an ordinary thing. Thus, as man chooses his profession and residence, he chooses his own religion. According to this belief, religion finds its origins in the traditions and beliefs of people. However, in Islam, this absolute freedom is servitude, for if a man is free to choose whatever he likes as his religion, then he falls into the pitfall of his desires and follows them,

The implication is that man has to choose the true religion although he is free not to choose any religion.

However, in the bright atmosphere of monotheism, political freedom is never limited to this. In this atmosphere, there is talk of leadership and representation. In addition, there is a fundamental difference between the representation of Faqih and his deputyship. It must not be imagined that Islam accepts democracy and that we can choose the leader of the Islamic community with the votes of others. It is never so. What the votes of people have a part in is neither the leadership nor his representation.

According to Islamic thought, the Lord has chosen the qualified jurisprudent to lead the Islamic community. Society accepts the leadership of this leader with its vote as he himself accepts his leadership but he has no part in placing him as a leader. Hence, he accepts his leadership as a legal person. For the same reason, if he issues a verdict, no one is allowed to violate it nor is he allowed to violate it. So there is no difference between him and others as far as the observance of rules and laws is concerned.

Another difference is the kind of interpretation of opinion and expression. In this regard, the Holy Qur’an states,

“So give thou good tidings to My servants who give ear to the Word and follow the fairest of it.” (13)

On the other hand, the Holy Qur’an explains what the fair word is,

“And who speaks fairer than he who calls unto God and does righteousness and says, surely I am of them that surrender?” (14)

Thus, although the Holy Qur’an bids others to listen to different sayings and choose the fairest, it introduces the fair words. In other words, it offers the general syllogism, “Freedom in choosing the fairest word” it offers the minor syllogism “the nature of fair words”. The proponents of atheism do not pay attention to this minor syllogism and think that man is completely free to choose his way.

“I invite ye all unto God; with a clear sight which I and he who followeth me” (15)

However, the followers of atheistic thought accept only the broad premise and neglect these two premises which are the central motifs of that premise. It must be noted that all schools of thought believe themselves to have the fairer words. Even the followers of Pharoah who perpetrated numerous crimes believed themselves to be the followers of the superior doctrine and warned their people that Moses and his brother Aaron were determined to destroy that.

“These two want to wipe out your most exemplary tradition”(16)

Another instance of difference may be observed in economic freedom. In the open Islamic atmosphere, after enumerating the lawful and the unlawful, it has been stated that everyone can be a master of his economic achievements.

It must be noted that wherever the Holy Qur’an lays stress on a common affair between man and woman, it enumerates it separately for them. (18) In most cases, the Holy Qur’an explains the common affair between man and woman with a certain expression; however, in striking instances, it employs a special expression for each of them. From this one can gather that freedom of profession and economic independence are of paramount importance, otherwise, God would have said, “For every one shall have of what they earn.”

From the discussion on economic independence and lawful and unlawful, one can perceive that in Islamic thought, economic freedom is interpreted within the matrix of the servitude of God and respecting the lawful and the unlawful. However, in materialistic thought, nothing but the economic considerations of man determines for man any boundary for trading and economic policy of man. In view of this, the most unpleasant transactions and the ugliest tradings are allowed in materialistic thought, even if it jeopardizes the most decent moral and human institutions.

The very difference may be observed in freedom of residence. In divine thought, man is not free to travel where he likes and make his residence wherever he wishes. Although the Holy Qur’an regards the earth as being extensive, religious teachings warn us to make residence where we are capable of preserving our religious values. This idea is implied in the words of Imam Ali, “The best place of residence is the one, which can tolerate you.”(19)

For this reason, it is not essentially advisable to travel to a land where one’s religion is endangered. In other words, the freedom of residence is acceptable as far as the spiritual life of man and his original freedom are not threatened. However, in this case, the adherents of atheistic thought do not see any boundary for themselves and decide to settle by their materialist criteria. And they do not accept that moral and religious criteria can limit this freedom.

Continue in the next article: ( Principles of Human Rights in Islam 4 )