Principles of Human Rights in Islam 2 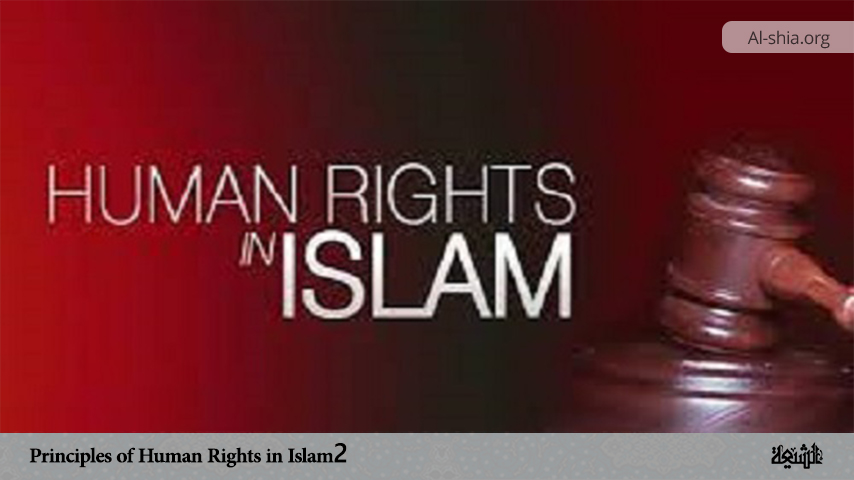 In this part of the article titled “The principles of human rights in Islam”, we shall continue on the right to life, then the differences between physical life and spiritual life, Islamic viewpoint on suicide and homicide.

The Most Important Distinct Feature Between Physical and Spiritual Life

In the two previous parts, we talked about the two aspects of life. Now the question is how useful this division may be to the understanding of human rights. To discover this effect, one must understand the relationship between the soul and the body.

The most important feature of the body is that it has different conditions in different situations, for instance, the difference in climate, race and geographical features of different people. Even the way plants influence other things in a certain area is geographically different. Sometimes it is observed that the plants with medicinal properties grown in tropical areas are void of medicinal properties in other areas. Even a wise and experienced pharmacologist cannot say for sure that a certain medicine has equal properties for different people.

However, man’s incorporeal spirit is never prone to climatic differences. This spirit which may exist in the east exists in the west. A spirit at the equator has the same features as a spirit at the South Pole. The incorporeal spirit is bound neither to the earth nor to the sky. However, it is on earth and in the sky. In other words, unlike the body, the spirit is one, not plural; it is static but not dynamic. For the same reason, there is no change in the spirit:

If the spirit is only on earth, it cannot move in the sky while man’s spirit can find God in the sea and in the sky: “O you who are in the earth and in the sky.” (2) Because of this lack of boundary of the human spirit, God says:

Now, the fruit of this discussion can be observed in legal topics. Human rights are formulated within the realm of the human body. Hence, these rules are dependent upon different places. Thus, they cannot be universal. However, religion, which is in the realm of the spirit, does not belong to time and place. It is obvious that all the things associated with religion, including legal-religious rules have the same characteristics. For the same reason, the prophets have brought down the message of the sublime religion. For the same reason, one can never reach a dogmatic certainty in material sciences. Every day the world witnesses something new founded on other propositions. However, religious concepts never know decay and change.

More than any other religion, Islam has placed stress on the prohibition of suicide. There is historical evidence that says, the holy prophet said about someone, “He will surely go to hell.” Upon hearing this, people were surprised and asked the reason because the person in question was outstanding as a warrior and as a politician. Afterwards, they learned that the person in question had committed suicide. (4) The right to life is so valuable that if ever anyone violates this right and commits suicide will go to hell.

It must be noted that mental suicide is far worse than physical suicide. It may not be imagined that Islam accepts such freedom of opinion. According to other religions, man is free to choose his own way of life. However, as mentioned earlier, the holy Quran holds that life is not only man’s right but also his duty. This is a precious gem in the hands of man and he should try his best to guard it. It goes without saying that the violation of spiritual life is worse than the violation of physical life. It is interesting to note that committing physical suicide is forbidden by certain religions but cramming the minds with poisonous ideas is not considered forbidden.

Reasons for Forbidding Suicide and Homicide

Now we must see why suicide or homicide is forbidden. Firstly, it must be said that even the angels considered the shedding of each other’s blood as a vile act:

“Will thou set therein man who will shed blood?” (5)

If there were no truth in what the angels said, God would not have accepted it. God implicitly accepts this truth which shows that the idea of homicide was vile and revolting. In later ages, other signs of this prohibition were seen. For example, one of the promises taken from the Sons of Israel was not to shed blood:

“And when We took compact with you: You shall not shed your own blood.’” (6)

This promise is not particular to one single group but belongs to all religions. Retaliation used as a means to stop blood shedding is common in all religions. Thus, the Holy Qur’an states retaliation with a view to approving the previous holy books. (7)

However, besides these common examples, there are other reasons. The prohibition of killing is one of the first commands of the holy Prophet:

“Come, I will recite what your Lord has forbidden you; that you associate not anything with Him, and to be good to your parents, and not to slay your children because of poverty; We will provide you and them; and that you approach not any indecency outward or inward, that you slay not the soul God has forbidden, except by right.” (8)

“Do not kill your children because of poverty. We shall provide for you and them.” (9)

Sometimes they killed their children before the idols to come close to them. This indiscreet act was also prohibited by Allah:

“Those who killed their children ignorantly suffered.” (10)

The same prohibition is included among the conditions for entering into a covenant with women. The Holy Qur’an states,

“Enter into covenant with those who do not kill their children.”(11)

ln this part, one can resort to verses, which determine the punishment for the killer. This is one of the reasons for prohibiting killing. Some of these punishments are spiritual and some others physical. Physical punishments include retaliation or paying blood money. One of the spiritual punishments for killing a believer is remaining eternal in the fire.

The violation of others’ right to spiritual life incurs the same punishment. Those who lead others astray should repent of their deeds. However, this repentance is accepted when they repair all the destructive thoughts they have brought about. Thus, repentance is considered a solution for these people:

“… be cursed by God and the cursers, save such as repent and make amends, and show clearly- towards them I shall turn.” (13)

To put it in a nutshell, Islam regards life as man’s right and duty, considering two phases for it: physical and spiritual; it prefers the spiritual phase to the physical one. It considers certain punishments for the violators of this right.

Continued in the next article: ( Principles of Human Rights in Islam 3 )