The Philosophy of Signs and Evils 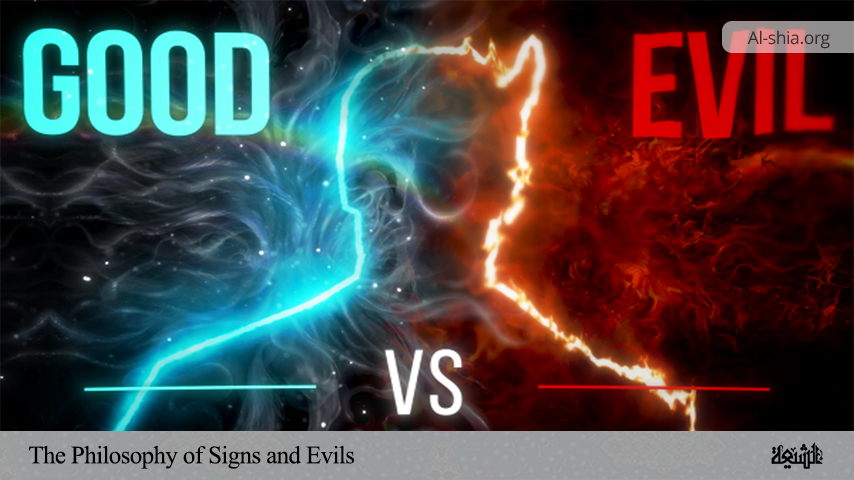 From the earliest times to the present, a group of the unaware went against God’s Justice and expressed ideas that either God’s Justice did not exist or even sometimes they not only negated justice but used it as a means of proving the nonexistence of God like unexpected catastrophes such as hurricanes, earthquakes, and other natural calamities, and differences of these types which can be found among people and also calamities and evil which extend to human beings or plants and animals.

Normally, all of us, in our judgments and determination of confirmations, stress the relation things have with us. For instance, we say, such and such is near us or far from us in other words, in relation to us. Or such and such a person is strong or weak, that is, in comparison to our physical ability or spiritual situation. In issues relating to good and evil and calamities and natural catastrophes, people’s judgment is usually the same.

For instance, if rain falls in a region, we have nothing to do with what the total effects of the rain were. We only think about our own environment, home or pasture areas, or, at the most, our own city. If it was a positive event, we say that it was God’s Blessing and if negative, we call it a negative event. When they destroy a building in order to build a new one, and we only share in its dust, we say that it was a bad event even if in the future a hospital will be built there which everyone can make use of and even if the rain had positive effects in other parts of the city.

In our normal judgments, we consider a snake bite to be a calamity without recognizing the fact that this very bite and poison is an effective means of defence for this animal and disregarding the fact that sometimes from this very poison, a life-giving medicine is produced which saves the lives of thousands of people. Thus, if we do not want to be misled, we must look at our own limitations and in our judgments, not only look at things in relation to ourselves but rather consider all sides of the issue and judge from all points of view.

In principle, events in the world are all linked together like a chain. The hurricane which hits our city today and the heavy downpour of rain which brings floods are one of these long links which are completely related to other links and are related also to an event which took place in the past and will take place in the future. The conclusion or result is that putting one’s finger on only a small part of an issue and judging it accordingly is not to have used one’s intellect and logic.

That which is worthy of creation (that which creation deserves) is complete goodness but if something, from one point of view, is evil, goodness prevails. A surgical operation is discomforting, from one point of view, and, from another, beneficial. Thus, goodness is relative. For further development and discussion, let us look at the occurrence of an earthquake. It is true that in one area, destruction occurs but if we consider its relation to other issues, we can change our opinion.

Does an earthquake relate to the temperatures and pressure within the earth or does it relate to the attraction of the moon which continuously draws the earth towards itself and it sometimes breaks or does it relate to both? Scientists have differing views. But whatever of these exist, the effects upon another thing must be considered. That is, we must know what effect the temperature; inside the earth has in creating oil resources, which is the most important ·energy material in our age and also the creation of coal, etc. Thus, goodness is relative.

And also what effect the ebb and flow of the tides stemming from the pull of the moon on the oceans has upon life within the water and its creatures and often, watering a dry coastline in places where sweet water meets the oceans. This is also relatively good. It is here that we understand what relative judgments and the limited information we have when we look at issues like this as dark points that the attractions of the created world contain and however much more we look at the relationship between phenomena, we become more aware of its importance.

The Holy Quran tells us:

“Of knowledge, it is only a little that is communicated to you.” (1)

We have all seen people who when drowned in blessings, fall under influence of pride and selfishness and in this state or condition, many of the important issues and duties are forgotten. And, also, we have all seen that at the time of the calmness of the oceans of life and complete restfulness, how such a state of sleep and forgetfulness is given a person, which, if it continues, will bring great misfortune to that person.

Without a doubt, some of the undesirable events of life are in order to end that state of pride and to do away with this sleep and forgetfulness of life.

You have most certainly heard that experienced drivers complain about roads which are flat, level and lacking any twists or turns, ups or downs and they describe these attractive qualities as dangerous ones. Why? Because the monotony of this road causes a driver to fall asleep and it is here that danger comes to him. It has even been seen that some countries have created artificial ups and downs and put holes to prevent such a danger.

The path or way of life of a human being is also the same. If life does not have any ups or downs or potholes, and if undesirable events never occur, a state of forgetfulness of God and sleep will come and prevent a person from undertaking his or her duties and responsibilities.

We are not intimating that a human being must create undesirable events for himself or herself or welcome misfortune because calamities have continuously been and will continue to be. Rather, we say that one must be attentive to a part of this philosophy which is to prevent pride and forgetfulness because these are enemies and barriers to well-being and happiness. We repeat, this is the philosophy of a part of these undesirable events, not all of them because they have other aspects, as well, which, with the Will of God, will be mentioned in further lessons.

The Holy Quran tells us:

“When the suffering reached them from Us, why then did they not learn humility?” (2)

Continued in the next article: ( http://The Philosophy of Undesirable Events in Life)