The Islamic System of Judiciary in the Qur’an 1 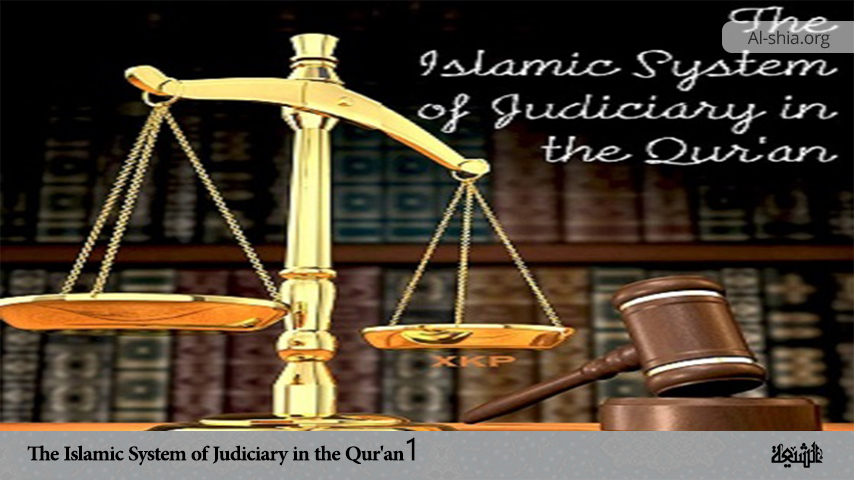 There are a number of noble Qur’anic verses which deal com­prehensively with the `system of the judiciary’, and which we must examine closely. In the following sections, these verses will be studied and the following results are derived from them:

1. The need for the judiciary (al-qada’), which is indispensable for the life of human society.

2. The criterion for the judiciary.

3. The rules of conduct for the judge, his qualities, rights, and particular duties.

4. The duty of the litigants in observing the criteria specified by none other than revelation and in refraining from opposition to and questioning what has originated from the Source of the judiciary.

5. Matters concerning the judiciary, such as testimony and the duties of the witness.

We will discuss these important issues, and study the Qur’anic view of them.

The Need for Judiciary

Man is a social creature. He is unable to dissociate himself com­pletely from others and live in isolation and seclusion. He is also unable to live in complete harmony with others since each person has his own particular ideas, qualities, and conduct. to which his nature inclines, which characterize him without anyone else sharing them either partly or wholly. If a man is unable to live alone and remain in absolute soli­tariness, nor able to live in complete harmony with others, then dif­ferences will undoubtedly appear between individuals and groups.

There will be strife between them and disputes will take place about particular interests, with each one having an eye out for his own in­terests. If there were no general rules to which people could take recourse and no criteria by which truth could be distinguished from falsehood, social order would be disrupted, human society would break down, and public affairs would be in disarray. The noble Qur’anic verses testify to this. As regards the first point, i.e., man’s nature as a social creature, it is indicated by the statement of Almighty Allah, the Exalted: O mankind, We have created you male and female and appointed you races and tribes, that you may know one another. (1)

If man was not social by nature and individuals were able to live by themselves, there would be no need for races and tribes since they would not require mutual acquaintance, which depends on social ties. Regarding the second point, i.e., the inevitability of conflict, Almighty Allah, the Exalted, says: Had thy Lord willed, He would have made mankind one nation; but they continue in their differences, excepting those on whom Thy Lord has mercy. (2) Almighty Allah’s responsibility is to show the way, and some do swerve from it. If He willed, He would have guided you all together. (3)

These two types of differences have been indicated by Almighty Allah, the Exalted:

The people were one nation; then Almighty Allah sent forth the prophets, good tidings to bear and warning, and He sent down with them the Book with the truth, that He might decide between the people touching their differences and only those who had been given it were at variance upon it after the clear signs had come to them, being insolent one to another then Almighty Allah guided those who believed to the truth, touching which they were at variance, by His leave; and Almighty Allah guides whomsoever He will to a straight path. (4)

It is inferred from the first part of the verse that primitive man was simple in his beliefs, with a sound natural disposition (fitrah) and far from deviation and desire (haws), even though he would differ from others of his kind on certain matters. Differences in matters such as these were inevitable in his life’s course since man had been created for perfection and these formed part of – the stages of his growth. In order to settle these differences and elucidate the truth during the conflict, Allah, the Exalted, revealed the Book accompanied by the truth, which moved along with it.

On the elucidation and clarification of the truth, the people were divided into two groups: some of them believed and followed what the Book had brought, and others did not believe through insolence and hostility. This is the disagreement con­cerning faith and conviction, and it is a reprehensible disagreement. Regarding the third point the necessity of determining the general rule to resolve disagreements-that is indicated by the state­ment of Almighty Allah, the Exalted: Nay, but they cried lies to the truth when it came to them, and so they are in a matter perplexing. (5)

Almighty censures them for the disorder of their state. They have fallen into confusion by their denial of the truth, and He enjoins them to resort to the truth, avoid creating confusion, and maintain the correct order. Islam has been concerned with removing these differences through training, education, discipline, and purification. It has urged adherence to `the strong rope’ of Allah and abstention from conflict which would result in social discord. It has brought about brotherhood ‘- among the believers and made them “merciful one to another” even though they are “hard against the unbelievers”(6). It has described the believers as being “a building well-compacted” (7)  in confrontation with untruth, and as “friends one of the other; they bid to honour and forbid dishonour”.(8) It has called them to “enter the peace, all of you”,(9) and not to be separated from the circle of Islam even by an inch, since “one isolated from the community is, for Satan, as the isolated sheep is for the wolf.” It has praised those who ask the forgiveness of Allah, the Exalted, for themselves and their brothers who had preceded them in the faith, and told them to call on Almighty Allah, the Exalted, not to put into their hearts “any rancour towards those who believe”. Apart from these, there are other lofty qualities necessary for removing differences and for preventing their development in the hearts, or they’re becoming apparent in their behaviour since people have been taught that Allah knows what they hide in themselves and what they disclose through their conduct.

In order to preserve the social order and safeguard social unity, disagreements are to be removed by referring them to the judgment of Allah and His Messenger, by appointing Him as arbitrator in their disputes, and by not turning away from Him to another, since His judgment is the sole legal recourse to settle disputes and solve dif­ferences, and no one has a choice in what Allah and His Messenger have ruled.

The judiciary is the guarantee for applying a just system of regulations and preventing disarray in social affairs. It requires the estab­lishment of everything in its proper place, the returning of every right to its owner, and every one obtaining his due. That is why the “pro­position” is termed “qadiyyah”; because as long as the predicate and its judgment as regards the subject has not been ascertained and the subject’s judgment has not been determined in relation to the predicate, either negatively or positively, one is hesitant and uncertain until rightness is distinguished from error and the sound from the unsound. When the intellect judges a particular matter and gives a specific verdict, then peace of mind is achieved and doubts end. Thereat the matter with regard to its conceived terms is described as qadiyyah, and the mental form with regard to its conceived terms is called judgment (tasdiq).