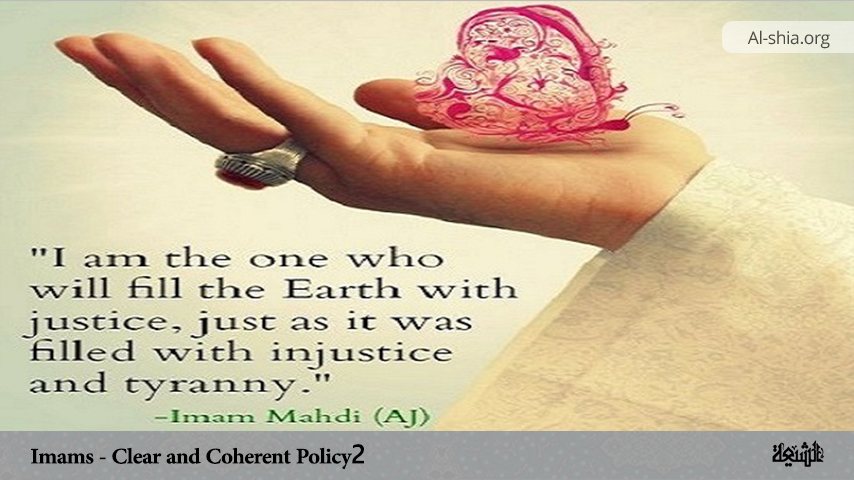 In continuation of the article titled “Imams – Clear and Coherent Policy”, we shall highlight some of the reasons why there were differences in the approaches of the Imams during their periods.

Al-Sajjad, during the time of his Imamate, concentrated his efforts on purifying the souls of his people and encouraging fear of God in their acts and in their statements, giving priority to the purification of the soul by applying the rules of God firstly upon the individual, discouraging him from the self-interest which had contributed to al-Husayn’s death. Al-Sajjad’s intentions were to bring together a group of sincere Muslims, who adhered to the objectives of Islam and performed its rules, called people to obey God in their actions before their tongues, and followed the Imam in all things.

Furthermore, al-Sajjad insisted that his followers understand that any war with the sword could only be a jihad if the one who proclaimed it possessed the necessary quality of calling people to God through his acts rather than his statements. It is stated that he mentioned the following Qur’anic verse, “They are the ones who turn to God in repentance, who worship him, who praise him, who go about in the land serving him who bow down to God, who prostrate themselves in prayer, who enjoin good and forbid evil, and who watch the limits set by Allah And give glad tidings to those who believe” (1). Thereafter he stated, “When we find those who possess these attributes, jihad with them is better than the Pilgrimage” (2).

Imam al-Baqir followed his father’s policy and did not rebel against the Umayyads, and advised his brother, Zayd, not to rise in arms against the illegal authority of the Umayyads, because the Community was not sufficiently politically aware to rebel against the government. So al-Baqir began to disseminate political awareness in the Community, by means of Prophetical traditionist just as he commanded snore of his followers to remind the people of al-Husayn’s struggle and his martyrdom during the Hajj each year, thereby hoping to kindle the feelings of the Community, to move their hearts and to inflame their emotions so that they could sympathise with the ideology of revolution for upright causes.

For, the time of the Hajj is one of gathering for Muslims from all countries, and the dissemination of the objects of the struggle and martyrdom of al-Husayn, and the illustration of his close relationship to the Prophet, encouraged both complaint and doubt concerning the legitimacy of the authorities, which in turn created a fertile environment for a movement towards bringing about their downfall. Despite the fact that the cultural activities of al-Sajjad and al-Baqir drew a large number of followers to them, al-Baqir did not consider them suitable for rebellion, because they lacked the necessary loyalty and organisation. Al-Kulayni reports that ‘Abd Allah b. al-‘Ata once said to al-Baqir, “Indeed your party is large in Iraq.

By God, there is nobody amongst your people like you. So why do you not rise in arms?” So he replied, “O ‘Abd Allah b. al-‘Ata, you have taken to listening to the masses.” While it is also related that al-Sadiq himself did not count a large number of his followers as an integral part of his plans for revolt. On the contrary, he gave precedence to their faith, their fear of God, their courage in standing by the truth, and their loyalty and obedience to the Imam. The resolute policies of the Imams al-Baqir and al-Sadiq were not unplanned but were in fact based on bitter experiences. Many reports state that the plans of the Imams involved a rebellion in 70 A.H., but the martyrdom of al-Husayn delayed these plans. There is also evidence in these plans of a revolt to be staged in 140 A.H. But due to the lack of organization amongst the Imam’s followers, and their inability to keep the date of the revolution secret, their plans became known to their enemies, and so, the later Imams did not inform their followers of any subsequent intended uprising.

From this survey, it is clear that the Imams actually possessed a clear and coherent policy. For example, Imam Ali made a truce with the contemporary rulers when he had only a few followers, but, when the number of his followers increased, he took arms openly, and similarly, al-Hasan fought when he and his party were strong but made a truce in the time of weakness. Al-Husayn did likewise, and rebelled in the way of God, depending upon the loyalty of the Kufans, while the other Imams refrained from doing so until they had established a strong body of loyal followers, capable of transforming the ideology of the Community in favour of God’s law.

The main task of the faithful at the present time is to cleanse themselves of any act related to the era of the Jahiliyya, and this can be achieved by following the orders of God, as illustrated by the behaviour and daily life of the Prophet and his Household. Every believer who claims allegiance to the present Imam should present his allegiance and his loyalty to the Imam by performing the obligatory commands and rules, such as the prayers, fasting, the zakat, the Hajj, and by showing obedience to the legal ‘Ulama of Ahl al-Bayt, following their instructions and calling people to good and forbidding evil acts. Similarly, they should perform actions which strengthen the social ties of society and establish it firmly and safely, such as obedience to parents and relations, respect towards neighbours, trustworthiness in agreements and contracts, loyalty in their occupations and in their dealings with people and to the country in which they live.

The one who is loyal to Ahl al-Bayt and the Imam of the Age is the person who refrains from bad deeds, such as polytheism, disobedience to their parents, slandering women as adulteresses, killing innocent people, lying, theft, the drinking of alcohol and any act which separates one from God. If the faithful perform the obligatory deeds, refrain from what is forbidden and obey God loyally, this will lead to the establishment of a society free from complexity and corruption, in which the faithful can be sincerely loyal to the commands of the Imam of the Age.