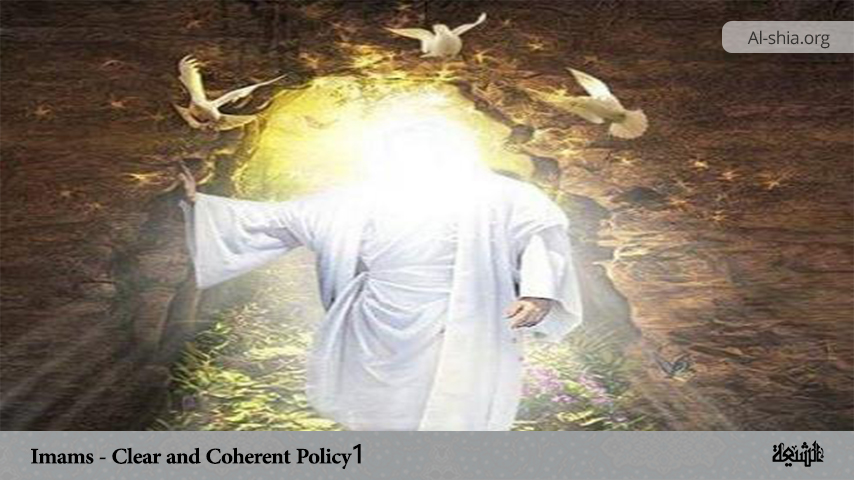 A question has puzzled some believers a great deal, namely why did al-Husayn fight with the sword, while his successors refrained from doing so, especially as all the Imams subscribed to a single and coherent ideology. For, if al-Husayn, in spite of the small number of his followers rose up against injustice, demanding his usurped rights, why did Imam al-Sadiq, for example, not rise up when the numbers of his partisans had increased? This question necessitates knowledge of the circumstances faced by al-Husayn, compared to those that faced the other Imams, so that we can recognize our task today.

It is, naturally, well-known that the Prophet started his mission peacefully and secretly, and that this continued for more than ten years. During these years he succeeded in forming a group of followers, who firmly believed in the new message and rejected everything which was connected with the time of the jahiliyyah. Eventually, the Prophet felt that this group was capable of confronting the power of the jahiliyyah, and so raised the jihad with the sword, and, after a bitter military struggle, succeeded in founding the Islamic state in Medina. This, hard task that led to the Prophet’s establishment of a new society was left, in its entirety, to Imam Ali, so that he could complete what the Prophet had initiated, as regards the complete elimination of the beliefs of the Jahiliyya, and then establish a society which would base its relationships upon the prescribed rule of God’s law.

However, Imam Ali did not come to power immediately after the death of the Prophet. On the contrary, he was prevented from achieving power and had but a few loyal supporters, having discovered that many of those who had been converted to Islam had only embraced it externally, without true belief in their hearts, and acted according to the customs of the Jahiliyyah while covering it with a superficial belief in Islam. Such a situation confirmed the predictions of the Quranic verse which says, “If he dies or is killed you shall turn your backs” (1), that is, you shall return to your old beliefs. The Imam found that he could not rise to recover his rights, so he did not rebel. But strove throughout his life, to organize a group of sincere believers from among the Community, attentive to the objectives of the new religion, believing in the legitimacy of Ali’s claims to the Imamate, and applying the Sunna of the Prophet in their daily lives.

When he finally came to power, after the death of Uthman, Imam Ali did not demand silence as regards economic and political corruption, but rather encouraged the community to purify their hearts and their actions, and fought those Muslims who sought to exploit the Islamic expansion to their own ends, or interpreted the laws of Islam according to their own desires and interests, at the expense of those of society at large.

Al-Hasan followed in the footsteps of his father in the fight against the power of the Jahiliyya, and against some of the Muslims, whose souls had not been purified by the fear of God, and who were exploiting the economic and political advantages of the Islamic expansion into Syria. For this reason, he continued to fight and encourage his followers in their struggle, but some of his followers refused to obey his commands, and one even tried to assassinate him in al-Mada’in, which resulted in Al-Hasan’s receiving a serious leg injury, which contributed to his later agreement to a truce.

The splits amongst the followers of al-Hasan, and the spread of the disturbances amongst his army on, one hand, and the unity of the opposition and their insistence on continued hostilities on the other, forced al-Hasan to sign the truce with Mu’awiya. Some of the most important stipulations of this truce were that Mu’awiya would not endanger the life or the properties of al-Hasan’s followers, or curse the People of the House, in the mosques, and that al-Husayn should succeed Mu’awiya on the death of the latter.

Imam al-Husayn committed himself to act according to the stipulations of this agreement, whereas the opposition, during the twenty years of Mu’awiya’s rule, systematically broke the points of agreement one after another. In the last years of his rule Mu’awiya designated Yazid as his successor, thus breaking his promise to al-Hasan, that al-Husayn would succeed him. Al-Husayn had been keeping a careful watch on the activities of Mu’awiya during his rule, and had, accordingly, prepared his followers for any eventuality. In light of what reached him from Iraq al-Husayn believed that the people were ripe for rebellion on one hand, while, on the other hand, he noticed that the Community as a whole had become stagnant and needed somebody to bring it back to life Therefore he advanced towards Kufa and, in spite of the fact that the Kufans who had previously promised to help him, had withdrawn their support and listened to the overtures of the authorities, he determined to fight despite the fewness of his followers, until all of them perished at the Battle of Karbala.

From this, it is clear that al-Husayn’s decision to fight was by no means an innovation but rather a continuation of the policy of his brother, father and grandfather, as regards opposition to the power of the Jahiliyya whenever possible. The assassination of al-Husayn led al-Sajjad and the other Imams to adopt their quiescent policy towards the authorities who had seized power because he realized that:

Firstly: In spite of their numbers, the followers of al-Husayn did not possess sufficient loyalty to surrender themselves and their possessions in the path of God, according to the instructions of the Imam;

For this reason, we find al-Sajjad following a policy of silence towards the authority of the Umayyads, however, this silence did not indicate recognition of their authority, but rather that his own followers were few. Similarly, his isolation from society was by no means an escape from reality but was in fact tacit opposition to the corruption and tyranny which had brought about the assassination of al-Husayn, the burning of the Kaaba, and the attacking and plundering of the City of the Prophet, which had lasted for three days.