Imamate in the Quranic “Verse of Trial” 3 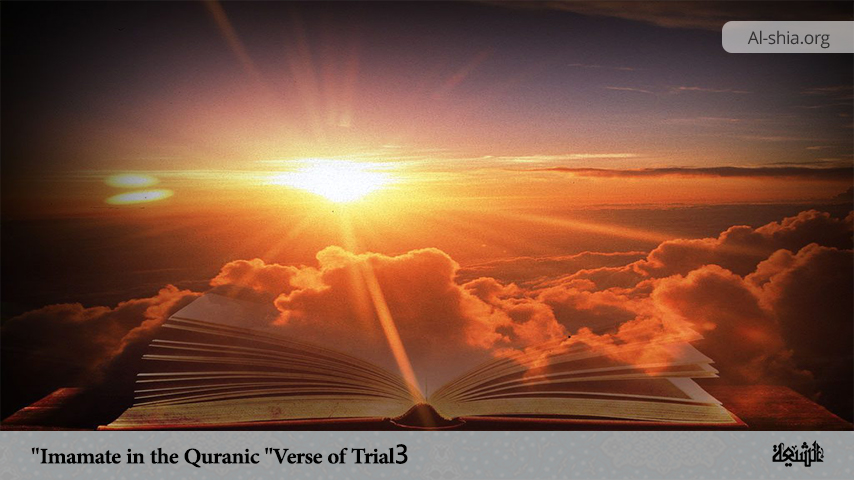 In this part of the article titled “Imamate in the Quranic Verse of Trial”, we shall discuss the status of Imamate and the Imams as explained by one of the pure Imams from the Prophet’s progeny; Imam Ali ibn Musa al-Reza (a.s).

The Status of Imamate in the Words of Imams

After we have investigated the Quranic verse, it is now befitting to go through a narration reported from Imam Ali ibn Musa al–Rida (as), the 8th Imam of the Shi’ah, in which he elucidates the reality of Imamate:

“Abdul Aziz ibn Muslim is quoted to have said, ‘On the first days of our arrival at Marv, we assembled in the presence of Imam al Rida, (as) in the great mosque of the city of Marv. Some started talking about Imamate and said that there had been different views over it. So, I went to my master, Imam al–Reza (as), and informed him about people’s arguing about the subject. He smiled and said ‘O Abdul Aziz, these men do not know the reality and have deviated from what they believe to be right. ‘God, the Almighty did not raise his Prophet up (to Him) before He had perfected the religion for him, sent on to him the Qur’an, which ‘clearly explains everything and delineated the lawful, the unlawful, hudood (penal law), divine precepts and all that people need, as he says ‘We have not neglected anything in the Book’. (1)

In the Farewell pilgrimage and towards the end of the Prophet’s life; God revealed the verse:

‘This day have I perfected for you your religion and completed my favour on you and chosen for you Islam as a religion”. (2)

Therefore, Imamate is indispensable to religion. The Prophet did not leave this world before he had clarified to the Muslims the principal features of their religion, pointed out the true path and appointed ‘Ali (as) as their leader, leaving nothing of their problems unsettled.

So, those who suppose that God, the Almighty has not perfected His religion reject the Book of Allah, and those who reject the Book are disbelievers. Do they know the significance of Imamate and its status in the community to allow themselves to embark on it?

Imamate is too great in worth, too lofty in status, too high in rank, too invincible in nature and too profound in depth for people to fathom it by their intellect or approach it through their thought or elect an Imam according to their will.

Imamate is a position for which God, the Almighty, has singled out Ibrahim (as) after granting him the rank of prophethood and taking him as a friend, a favour with which He has honoured him, as he said, “I will make you an Imam for mankind”. Then, God’s friend, Ibrahim, who was highly delighted asked, “and of my offspring?”

God the Almighty said, “My covenant does not include the unjust”. This Qur’anic verse has nullified the possibility of the unjust ones’ becoming imams until the Day of Resurrection and so Imamate has become a privileged position for the purified. God has honoured Ibrahim when He granted Imamate only to the selected and pure ones from among his offspring, as in the Quranic verse:

“And We bestowed Isaac and (then) Jacob on him as an additional boon; each We made into an honourable man. We made them leaders to guide (others) by Our command and We inspired them to perform good deeds, keep up prayer, and pay alms. They have been serving Us (alone)” (3)

Imamate continued as a privileged position for his offspring over the ages until God, the Mighty and High donated it to the holy Prophet and said:

“Most surely the nearest of people to Ibrahim are those who followed him and this Prophet and those who believe and Allah is the guardian of the believers” (4).

Then, by God’s command, the Prophet (s.a.w.a) placed Imamate in ‘Ali and in his chosen offspring, to whom God, the Mighty and High, has given knowledge and faith, as the Qur’an says:

And those who are given knowledge and faith will say: Certainly you tarried according to the ordinance of Allah till the day of resurrection”(5)

This position will remain in Ali’s (as) unerring offspring until the day of resurrection. How can these ignorant people designate an Imam? Imamate is a privileged position for the Prophets and heritage for the Prophet’s trustees.

Imamate is God’s Caliphate and a successor to the Prophet’s Caliphate, it is a privileged position of the Commander of the Faithful, and the inheritance of al–Hassan (a.s) and al–Husain (a.s). Imamate is the reins of the religion, the Muslims’ order, the soundness of this life and the believers’ might. Imamate is the cornerstone of ever-growing Islam and its highest branch.

It is only through the Imam that prayers, alms, fasting, Hajj and holy war (jihad) can be accomplished; it is through Imam that the divine punishments and laws can be executed and frontiers safeguarded.

The Imam is the bright moon, the illuminating beacon, the radiant light and the star that (safely) guides people in gathering darkness, (unknown) tracks of towns and deserts and swelling waves of the sea. The Imam is like pure drinking water, a rainy cloud, a falling rain, a bright sun, a shading canopy, an expanse of land, a gushing spring, and a brook and a garden.

The Imam is a companion, a friend, a loving father, an equal brother, a kind mother, and a shelter to the God-fearing at the time of great distress. The Imam is Allah’s trustee for His creatures, His proof over His worshippers, His caliph in His land, and the one who summons (people) to Allah and defends Allah’s sanctity.

The Imam is purified from sins and kept entirely free from defects, singled out as a man of (divine) knowledge and known for his endurance; the source of the order of the religion, honour of Muslims, the anger of hypocrites, and eradication of disbelievers.

The Imam is a peerless one of his time, whose dignity no one (else) can attain, whose merits are not acquired but are granted to him by God, the Bestowed who can (claim to) have known the Imam thoroughly, or to have the ability to elect him?