Imamate in the Quranic “Verse of Trial” 2 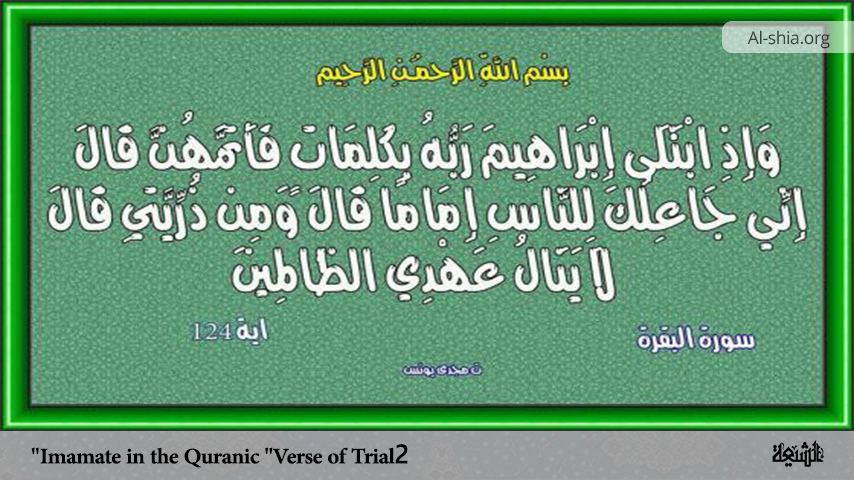 In this part of the article titled “Imamate in the Quranic Verse of Trial”, we shall continue our discussion on other relevant points about verse 124 of Chapter 2.

Imamate does not include the unjust

“My covenant does not include the unjust”

Thus signifying that the unjust must not hold this position. When God, the Most High said,

“I will make you an Imam for mankind”

The Prophet Ibrahim (as) asked,

“And of my offspring (will there be leaders)?”

God the Most High replied,

“My covenant does not include the unjust”.

So, this verse suggests the following points:

a) Imamate is God’s covenant.

b) This covenant does not include the unjust, and since sin is considered injustice, a person who is not divinely protected commits sins.

The above verse clearly and irrefutably shows that a religious leader (Imam) must necessarily be immune from sins and errors when his Imamate begins.

Does this mean that those who previously were unjust can hold the position of Imamate? In other words, does the (Arabic) derivative zalim (unjust) concern the present, not the past so that it does not include those who were unjust in the past but those who are just now?

Does the Qur’anic verse suggest that the person who is unjust at the time of undertaking Imamate will be deprived of this position, but the person who was unjust in the past but is not unjust now, can become an imam, (a religious leader)?

In answer to the above assumption, let us consider two citations:

1. In his Qur’anic Exegesis of al–Meezan, Allamah Tabataba’i quotes the renowned scholar the late Haji Sheikh Mohammad al–Husain Isfahani as saying, Prophet Ibrahim’s offspring can be divided into four groups:

a) Those who had been unjust before holding the position of Imamate;

b) Those who had been just before holding the position of Imamate, and became unjust after their holding it.

c) Those who had been unjust prior to holding the position of Imamate, but became just after holding it.

d) Those who were just both before and after holding the position of Imamate.

Prophet Ibrahim, grand as his dignity is, never includes the first two groups in his inquiry. Therefore, his words “and of my offspring?” refer to the third and fourth groups.

Then, the reply which he gets from God, the Most High, “My covenant does not include the unjust”, excludes those in the third group who were unjust in the past and are just at the time of occupying the position of Imamate. Accordingly, only the fourth group of his progeny are worthy of Imamate.

2. In his Ma’jma’ al-Bayan, a Quranic exegesis, the late Tabarsi says:

“We agree that the term zalim (unjust) does not apply to the person who is not unjust at the present, but this word applies to the person who had previously been unjust at the moment of his exercising injustice. The above-mentioned Quranic verse refers to such a person whom it considers not worthy of becoming an Imam. The statement “does not include”, which is a negative present tense, testifies to this idea”.

It follows that a person who has sinned, though for a single moment throughout his life can never become an Imam because such a person was a sinner at that particular moment, and the noble Qur’an states, “My covenant does not include the unjust”.

It is clear now that the Quranic verse emphasizes the twofold inerrancy of Imams, including the time of their holding the position of Imamate and throughout their lifetime. It is also clear that Imamate is a divine post set by the Almighty God, i.e. a divine gift given to those whom God considers worthy of it.