Imamate in the Quranic “Verse of Trial” 1 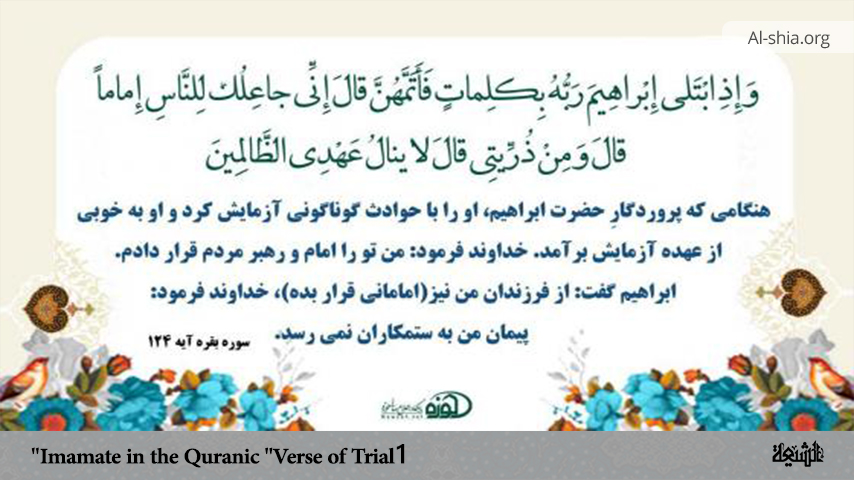 In Shia Islam, the Imamah (i.e., leadership) is considered one of the fundamentals of religion (Usul-al-Deen). It is a doctrine which buttresses the leadership of selected individuals from the lineage of the Prophet Muhammad immediately after his death. It is pertinent to mention that the verse of Ibtila, that is “Verse of Trial”  (Verse 124 of Chapter 2) is one of the verses to establish the doctrine of Imamate, where Allah says:

“And when his Lord tried Ibrahim with commands, he fulfilled them. He said: Surely I will make you an Imam for mankind. (Ibrahim) said: And of my offspring (will there be leaders)? He said, my covenant does not include the unjust” (1)

1. The position of Imamate is higher in rank than that of the Prophethood.

2. Imamate (religious leadership) does not include the unjust.

The following section is divided into three parts, each one focusing on one of the following topics:

1. The prominent status of Imamate

2. The (position of) Imamate does not include the unjust

3. The (status of) Imamate in the words of the Imams themselves

Part One: The Prominent Status of Imamate

The above-mentioned Quranic verse refers to the tests to which Allah exposed the Prophet Ibrahim many years after his prophethood at the end of his life. Having successfully passed the divine tests and patiently withstood the great hardships, he was granted the position of Imamate.

In order to elucidate the above Qur’anic words, it is necessary to explain some basic questions such as:

1. What relationship was there between the series of trials to which the Prophet Ibrahim was exposed and granting him the position of Imamate?

2. What are the kinds of tests to which the verse refers?

3. Can one say that the Imamate bestowed on the Prophet Ibrahim is equal to his Prophetic mission?

4. What idea does the above–mentioned Imamate convey?

In an attempt to answer these questions, we shall now go through the above questions one by one.

The Relationship between Trial and the Position of Imamate

Question: In the Quranic verse, it is said: “And when his Lord tried Ibrahim by means (of certain) words, he fulfilled them. He said: Surely I will make you an Imam for mankind…,”

The word “when” which is an adverb of time, requires an adjunct. The question is: What is its adjunct? The first supposition is that the word “when” requires the adjunct “remember”, which has not been stated explicitly. Thus, the verse reads

“O Prophet! Remember the time when his Lord tried Ibrahim by means (of certain) words…”

1) This supposition entails deleting something or refraining from stating it explicitly which is contrary to the basic rule (of rhetoric).

2) Without a conjunction “and” the clause “Surely I will make you an Imam for mankind”, is separated from the previous one.

Apparently, the context of the clause “I will make you an Imam” is not disconnected from the previous one but it is semantically and syntactically dependent on it. Since there is no conjunction “and” to join the two parts, it seems that when this part comes with the preceding part it forms a whole.

The relation between these two parts is an outcome of the dependence on “when” or “He said”. Thus the meaning will be like this: “When his Lord had tested Ibrahim, He said to him ‘I will make you an Imam’”.

Accordingly, tests prepared the ground for granting Imamate to Prophet Ibrahim. Another solid evidence is the Quranic verse wherein the relationship between the “patience” and “Imamate” of prophets is clearly explained: “And we made of them Imams to guide by our command for they were patient, and they were certain of our clear signs” (2).

The above verse mentions that it is due to the Prophets’ “patience” and “certainty” that they were granted Imamate, and this clearly shows that there is a connection between the tests to which the Prophet Ibrahim was exposed and the rank of Imamate to which the stated verse refers.

What were the tests that made the Prophet Ibrahim worthy of holding the position of Imamate? The Qur’anic verse states that Ibrahim was tested through “words”, and he brilliantly succeeded in the test. The words were apparently particular commands by means of which he was tested.

What the noble Qur’an means by “manifest trial”(3) which the Prophet Ibrahim faced in his life is his determination to offer his son as a sacrifice; an act which confirms Ibrahim’s boundless generosity and complete submission to Almighty God.

It should be noted here that the Prophet Ibrahim was put to test when he was very old, many years after he had been made a prophet and was given a son, Ismail when aged.

Does the Imamate to which this Qur’anic verse refers mean the same as Prophet Ibrahim’s prophethood?

Some commentators maintain that the Imamate given to the Prophet Ibrahim is identical to his divine mission and prophethood but as previously stated Imamate is different from prophethood for two reasons:

(a) The Qur’anic verse clearly states that this Imamate was granted to the Prophet Ibrahim after many trials, one of which is the offering of his son as a sacrifice, long after he had been made a prophet.

(b) The expression “ja’iluka” (I am assigning you) derived from the verb “ja’l” (make) is a present participle and its objective complement, imaman اماماً that has nunation (tanween) does not refer to the past it refers to the present or future.

Therefore, (contrary to the claim of some commentators,) the present participle “assigning” does not apply to the past and so it cannot indicate that the divine mission and prophethood are the same as Imamate.

What does Imamate mean?

From the Qur’anic verse, we learn that Imamate or religious leadership is different from nubuwwat (prophethood). An Imam is a leader, definitely appointed by God, to be a guide and an example for people to follow in all aspects.

1. That the position of Imamate was granted to Ibrahim years after his being messenger and after he had successfully passed the great divine trials, clearly shows that Imamate is not on the same plane as prophethood, but enjoys a higher status.

2. Now that Imamate has been proved to have a higher status than prophethood, and according to immutable reasons a prophet must be divinely protected against any error and sin, it follows that inerrancy is inseparably linked to the position that is loftier than prophethood.