Human Rights from the Viewpoint of Imam Sajjad (2) 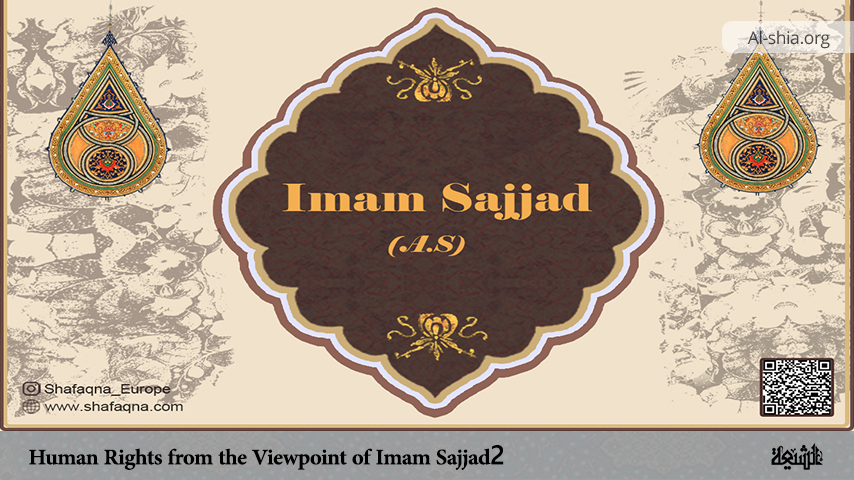 In this part of the article titled “Human Rights from the Viewpoint of Imam Sajjad”, we shall focus on other related aspects of the topic.

Modern psychology has been able to confirm the Islamic viewpoint that man himself is not aware of the major part of his characteristics, and this results in self-contradictory or negative behaviour. For instance, when faced with a social problem, he sometimes resorts to an evil behavior, which he had not thought of before. The point is that if he was better cognizant of his own self, he would not have responded in such a negative way. Thus, self-awareness means the maximum cognizance of one’s own self and innate characteristics by suppressing evil desires. In other words, a faithful person acts according to the famous hadith that says whoever knows himself, knows Allah. Hence, the human being, who is made up of body and spirit, ought to be fully aware of his innate characteristics. This is possible by keeping both the body and mind purified, which is essential is developing the intellect to distinguish the right from the wrong. To be more precise, real prosperity and access to the path of perfection depend on self-purification, because the bodily organs, in most cases, follow what the self desires. For example, our eyes follow the dictates of our mind and heart, and see things that we crave for. Thus, in view of these facts, we should try to abstain from sins and negative behaviour by keeping our thoughts and desires purified in order to save ourselves from psychological diseases. In this regard, the Prophet’s first infallible successor, Imam Ali (PBUH), says psychological diseases are cured only through self-awareness. He means to say that it is essential for a believer to become better cognizant of his own self through knowledge of ethics and moralities, which strengthens the faith and saves the soul from impurities. Such a person ought to be mindful of both the benefits and the dangers, and make notes of these realities in order to take serious action in purifying his soul.

Generally, whoever knows his weak points and deficiencies he or she will be successful in removing them and strengthening the faith. When a person realizes that being evil and corrupt are not in harmony with lofty human values, and that a free person is responsible for his own destiny, then such an aware and self-cognizant person will direct the soul towards moral perfection. Moreover, human dignity does not allow us to consider ourselves as worthless by trampling the rights of other fellow humans, in view of the fact that we have not been created in vain by Almighty Allah. Thus with self-recognition, human life becomes meaningful and ground is paved for cultivating moral virtues. In the Holy Qur’an, Allah emphasizes the point that the human being has been created good and purified from sins, and it is only its tendency towards evil that pollutes him. Yet, with the Allah-given powers of intellect and conscience, the human being is able to purify himself in order to attain salvation.

Self-recognition and purification have different ways. The most important of them is pondering. Sometimes, it is essential for us to evaluate our acts and their consequences. In this relation, psychiatrists recommend undisturbed solitude so that physical temptations do not cloud the mind. Thus, through proper evaluation of our daily actions, we can change for good our personality and life. By creating positive factors in oneself, one can adopt new values and new goals for life. Once, when Imam Zain al-Abedin (PBUH), the 4th Infallible Successor of the Prophet Mohammad (PBUH&HP) was asked who was the most important of all, he replied: The one who does not view the entire world equal to himself. That is, he is aware of human dignity and acts properly.

In the previous article, we talked about the characteristics of the self and how human nature is capable of achieving faith and self-content by overcoming despondency and misery. Whoever protects himself from the pitfalls of carnal desires he has realized truth, and in such a case has overcome such negative tendencies as jealousy, hatred and the other moral and spiritual diseases. We also said that if one becomes indifferent towards his internal characteristics he would go astray because of spiritual disorders. In other words, the salvation of mankind is impossible without purity of character and balanced behaviour in our daily affairs. Thus, whenever, we feel the symptoms of such negative tendencies such as greed, anger, jealousy and other uncontrolled desires, we should take prompt steps to overcome these desires by purifying ourselves.

Imam Zain al-Abedin (PBUH), the 4th Infallible Successor of the Prophet Mohammad (PBUH&HP) in his famous epistle dictated to one of his disciples and titled Risalat al-Hoqouq or The Treatise on Human Rights, considers purifying the self to be the prime duty of a Muslim. After mentioning the right of Allah upon man, he outlines our own rights upon ourselves as the second important set of rights, he says:

“The right of yourself (nafs) against you is that you employ it in obeying Allah; then you deliver to your tongue its right, to your hearing its right and you seek help from Allah in all that.”

In other words, temptations are an alien and unnatural feeling that drives mankind towards self-destruction. The more mankind surrenders to carnal desires, the more he or she becomes weak and loose, since self control has been ceded to an external power, a power that drives him or her towards destruction. On the other hand, control of the self prevents such foreign and unnatural tendencies from infiltrating our self and manifests our true human personality. When a person takes control of himself with his firm will he protects himself from dangers. Self-control is among the main objectives of religious teachings, particularly in Islam. Imam Zain al-Abedin (PBUH) cites self-building and self-reform as a right that makes human dignity flourish.

We need to know the reality of our own self and traverse the straight and unwavering path of righteousness in order to achieve high goal in life, that being with obedience to Allah and His commandments. This realization is the key to human prosperity. In the holy Qur’an, Allah Almighty says:

“And I have not created the jinn and mankind, except that they should serve Me.” (1)

In view of these facts, Imam Zain al-Abedin (PBUH) considers the greatest right of one’s self as obedience to Allah, and this goal should not be forgotten. The modern man who is surrounded by dangerous intellectual, cultural, and social storms, can only save himself and humanity by adhering to the laws of Allah. The Imam makes it clear that whoever realizes the goal of creation and obeys the commandments of the One and Only Allah, has observed his right upon himself. In other words, if someone gives priority to servitude of other than Allah, he has trampled humanitarian principles. Pride in posts and worldly ranks, greediness, and dependence on big powers are symptoms of straying away from the path and commandments of Allah Almighty. If humankind turns to other than Allah, he has actually trampled his own right.

It is evident that mankind, in order to observe his rights is in need of tools to help him smoothly traverse the straight and unwavering path. Out own bodily organs are among these devices. Allah Almighty, by granting us hands, legs, tongue, eyes and ears, as well as the power of the intellect and speech, has raised the human being to the pedestal of self-esteem that ought to make us better cognizant of the purpose of creation and our own rights.

We know that in human nature the ground is paved for both happiness and misery. Whoever preserves himself from dangers and carnal desires; he has paved the way of sublimity for himself and realizes truth. Wherever truth exists, there will be no jealousy, enmity and the other moral and spiritual diseases. A man who is eager to reach the truth will never be calm unless he knows himself and move in the right path.

But if mankind becomes indifferent towards his internal characteristics, he will be led astray. For, most of all mankind is hurt by his spiritual disorders. Therefore, the salvation of mankind is impossible without purity and balance in carnal desires. Wherever, human self is manifested in the form of greed, anger, jealousy and other uncontrolled desires, it should be purified. Imam Sajjad (PBUH) in The Treatise on Human Rights considers purifying human self to be his duty and after the right of Allah, expresses the right of mankind over himself as the second right and says:

“The right of yourself (nafs) against you is that you employ it in obeying Allah; then you deliver to your tongue its right, to your hearing its right and you seek help from Allah in all that.”

Attractions create a type of link between mankind and a foreign center and drives mankind towards it. The more mankind surrenders to his carnal desires, the more he becomes weak and loose, for, he has ceded his fate to an external power, a power which drags him this way and that way. But instead, domination over human self grows and flourishes the real personality of mankind. When a person takes the control of himself with his firm will, he can control and rid himself from dangers. Human domination over himself is among the main objectives of education in religions, particularly Islam. Imam Sajjad (PBUH) cites self-building as a right and duty so that in the daily life, the numerous gifts of the world do not absorb mankind and hurt his dignity. Therefore, it is a must that a man gains his glory and thinks about it.

A man requires knowing the reality of his own self and stepping in a right path to achieve the high goal for which he has been created. The goal is worship and obedience of Allah. In the holy Quran we read:

“And I have not created the jinn and the men except that they should serve Me.”(2)

Imam Sajjad (PBUH) considers the greatest right of oneself is obedience of Allah and this goal should not be forgotten, especially that the passage of the present turbulent life does not let mankind to think of the goal of creation. He has been surrounded by dangerous intellectual, cultural and social storms and we always witness new incidents which are created by the so-called civilized man. Imam Sajjad (PBUH) believes that whoever pursues the main goal of creation and worships the Great and One Allah, has observed his right upon himself. For, mankind gains greatness and becomes superior over the other creatures through understanding the glory of Allah. However, if someone, regardless of this high objective, gives priority to servitude of other than Allah, he has trampled the truth of his humanity. Dependence on post and rank, greediness and reliance on big powers are among the proofs of worshipping other than Allah. If mankind turns to other than Allah, he has actually ruined his own right. It is evident that humankind, in order to observe his rights is in need of tools to help him in this path. The body members of human being are among these devices. Allah Almighty has wished by creating hand, leg, tongue, and eyes to raise mankind to high esteem and rid himself from the world attachments.