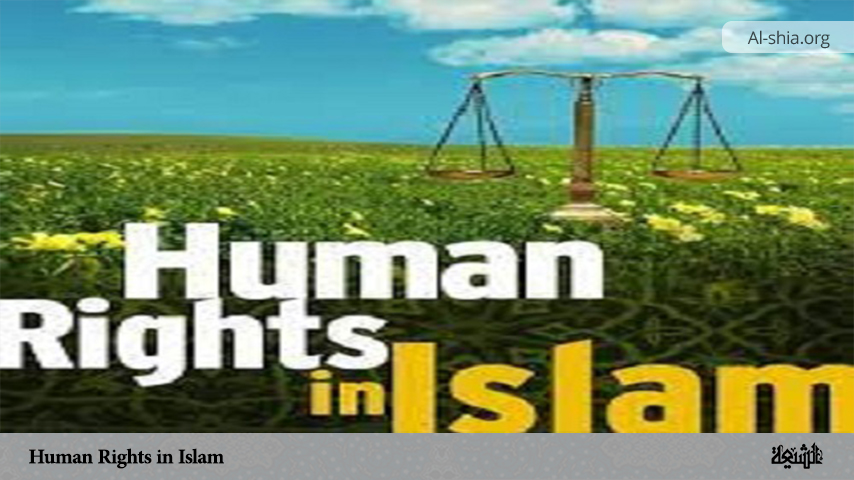 Hence Allah is the Absolute and the Sole Master of men and the universe, He is the Sovereign Lord, the Sustainer and Nourisher, the Merciful, Whose mercy enshrines all beings. And since He has given each human dignity and honour, it follows that united in Him and through Him, and apart from their other human attributes, men are substantially the same and no tangible and actual distinction can be made among them, on account of their accidental differences such as nationality, colour or race. Every human being is thereby related to all others and all become one community of brotherhood in their honourable and pleasant servitude to the most compassionate Lord of the Universe. In such a heavenly atmosphere, the Islamic confession of the oneness of God stands dominant and central and necessarily entails the concept of the oneness of humanity and the fellowship of humankind.

Although an Islamic state may be set up in any part of the earth, Islam does not seek to restrict human rights or privileges to the geographical limits of its own state. Islam has laid down some universal fundamental rights for humanity as a whole, which are to be observed and respected under all circumstances whether such a person is resident within the territory of the Islamic state or outside it, whether he is at peace or at war. The Holy Quran very clearly states:

” O you who have faith! Be maintainers, as witnesses for the sake of Allah, of justice, and ill feelings for a people should never lead you to be unfair. Be fair; that is nearer to God-wariness, and be wary of Allah. Allah is indeed well aware of what you do” (Qur’an 5:8)

It is not permissible to oppress women, children, old people, the sick or the wounded. Women’s honour and chastity are to be respected under all circumstances at any cost. The hungry person must be fed, the naked, clothed and the wounded or diseased treated medically irrespective of whether they belong to the Islamic community or are from among its enemies.

When we speak of human rights in Islam we really mean that these rights have been granted by Almighty Allah. The rights granted by the kings or the legislative assemblies, can also be withdrawn in the same manner in which they are conferred. The same is the case with the rights accepted and recognized by dictators. They can confer with them when they please and withdraw them when they wish, and they can openly violate them when they like. Nevertheless, since in Islam human rights have been conferred by God, no legislative assembly in the world or any government on earth has the right or authority to make any amendment or change in the rights conferred by God. No one has the right to abrogate or withdraw them. Nor are they basic human rights which are conferred on paper for the sake of show and exhibition and denied in actual life when the show is over. Nor are they like philosophical concepts which have no sanctions behind them.

The charter, the proclamations, and the resolutions of the United Nations cannot be compared with the rights sanctioned by Almighty Allah; because the former is not applicable to anybody while the latter is applicable to every believer. They are a part and parcel of the Islamic Faith. Every Muslim or administrator who claims to be a Muslim will have to accept, recognize and enforce them. If they fail to enforce them and start denying the rights that have been guaranteed by Almighty Allah or make amendments and changes in them, or practically violate them while paying lip service to them, the verdict of the Holy Quran for such government is clear and unequivocal:

“We sent down the Torah containing guidance and light. The prophets, who had submitted, judged by it for the Jews, and so did the rabbis and the scribes, as they were charged to preserve the Book of Allah and were witnesses to it. So do not fear the people, but fear Me, and do not sell My signs for a paltry gain. Those who do not judge by what Allah has sent down—it is they who are the faithless”(5:44)

Human Rights In An Islamic State

The Security Of Life And Property:

In the address that the Holy Prophet (PBUH&HP) delivered on the occasion of the Farewell Hajj, he said:

“Your lives and properties are forbidden to one another till you meet your Lord on the Day of Resurrection.” The Prophet (Peace be upon HIM) has also said about the dhimmis (the non-Muslim citizens of the Muslim state): “One who kills a man under covenant (i.e., dhimmi) will not even smell the fragrance of Paradise.”

The Protection Of Honor:

The Holy Quran lays down:

Sanctity And Security Of Private Life:

The Holy Quran has laid down the injunction:

“O you who have faith! Do not enter houses other than your own until you have announced [your arrival] and greeted their occupants. That is better for you. Maybe you will take admonition” (24:27.)

The Security Of Personal Freedom:

Islam has laid down the principle that no citizen can be imprisoned unless his guilt has been proven in an open court. To arrest a man only on the basis of suspicion and to throw him into prison without proper court proceedings and without providing him with a reasonable opportunity to produce his defence is not permissible in Islam.

The Right To Protest Against Tyranny:

Among the rights that Islam has conferred on human beings is the right to protest people against the government’s tyranny. Referring to it the Holy Quran says:

“Allah does not like the disclosure of [anyone’s] evil [conduct] in speech except by someone who has been wronged, and Allah is all-hearing, all-knowing” (4:148).

Islam gives the right of freedom of thought and expression to all citizens of the Islamic state on the condition that it should be used for the propagation of virtue and truth and not for spreading evil and wickedness. The Islamic concept of freedom of expression is much superior to the concept prevalent in the West. Under no circumstances would Islam allow evil and wickedness to be propagated. It also does not give anybody the right to use abusive or offensive language in the name of criticism. It was the practice of the Muslims to inquire from the Holy Prophet (PBUH&HP) whether on a certain matter a divine injunction had been revealed to him. If he said that he had received no divine injunction, the Muslims freely expressed their opinion on the matter.

Freedom Of Conscience And Conviction:

Islam has laid down the injunction in the Holy Quran:

” There is no compulsion in religion: rectitude has become distinct from error. So one who disavows fake deities and has faith in Allah has held fast to the firmest handle for which there is no breaking; and Allah is all-hearing, all-knowing” (2:256).

On the contrary, totalitarian societies totally deprive individuals of their freedom. Indeed, this undue exaltation of the state authority curiously enough postulates a sort of servitude, of slavishness on the part of man. At one-time slavery meant total control of man over man – now that type of slavery has been legally abolished but in its place, totalitarian societies impose a similar sort of control over individuals.

Along with the freedom of conviction and freedom of conscience, Islam has given the right to the individual that his religious sentiments will be given due respect and nothing will be said or done which may encroach upon his right.

Islam also recognizes the right of the individual not to be arrested or imprisoned for the offences of others. The Holy Quran has explained this principle clearly:

“No bearer shall bear another’s a burden, and should someone heavily burdened call [another] to carry it, nothing of it will be carried [by anyone] even if he should be a near relative. You can only warn those who fear their Lord in secret and maintain the prayer. Whoever purifies himself, purifies only for his own sake, and to Allah is the return” (35:18)

The Right To Basic Necessities of Life:

Islam has recognized the right of needy people to help and assistance to be provided to them. In the Holy Quran, it states:

“and there was a share in their wealth for the beggar and the deprived” (51:19).

Islam gives its citizens the right to absolute and complete equality in the eyes of the law.

Law above the Rulers:

A woman belonging to a high and noble family was arrested in connection with the theft. The case was brought to the Holy Prophet (PBUH&HP), And it was recommended that she might be spared the punishment of theft. The Holy Prophet (PBUH&HP) replied: “The nations that lived before you were destroyed by Allah because they punished the common man for their offences and let their dignitaries go unpunished for their crimes; I swear by Him Who holds my life in His hand that even if Fatima, the daughter of Muhammad, had committed this crime, I would have amputated her hand”.(Al-Kafi, Vol.5, P.294 – Wasael al-Shia, Vol.25, P.429).

The Right To Participate In The Affairs Of State:

It states in the Holy Quran:

“those who answer their Lord, maintain the prayer, and [conduct] their affairs by counsel among themselves, and they spend out of what We have provided them” (42:38).

The “Shura” or the legislative assembly has no other meaning except that the executive head of the government and the members of the assembly should be elected by the free and independent choice of the people.

Lastly, it is clear that Islam tries to achieve the above-mentioned human rights and many others not only by providing certain legal safeguards but mainly by inviting mankind to transcend the lower level of animal life to be able to go beyond the mere ties fostered by the kinship of blood, racial superiority, linguistic arrogance, and economic privileges. It invites mankind to move on to a plane of existence where, by reason of his inner excellence, man can realize the ideal of the brotherhood of man.

Thousands of blessings and Salams go to our Hero, Prophet Muhammad and his Pure Progeny (Peace be upon HIM and His Household).

Extracted from the literal work of  Dr. Zubair Fattani.