History of Technology in Islam 2 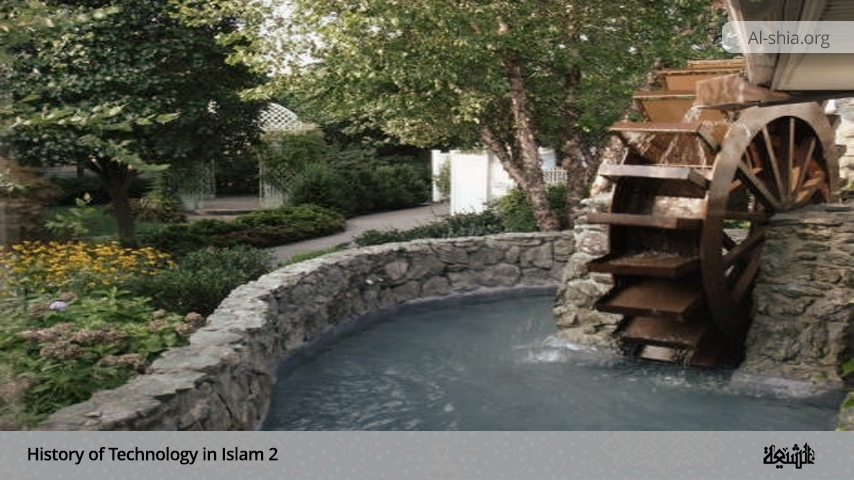 In this article titled “History of technology in Islam”, we shall be looking at “Watermills”, “Windmills” and “Fine Technology” as among the technological fields to which Muslim scholars immensely contributed.

The three main types of waterwheel had all been in existence since Classical times – the horizontal wheel and two variations of the vertical wheel. The horizontal wheel has vanes protruding from a wooden rotor, onto which a jet of water is directed.

In modern Europe, the design was altered to use water moving axially, like air flowing through a pinwheel, creating the water turbine. Interestingly, wheels with curved blades onto which the flow was directed axially are described in an Arabic treatise of the ninth century.

The more powerful vertical wheels came in two designs: undershot and overshot. The former is a paddle wheel that turns under the impulse of the current. The overshot wheel receives water from above, often from specially constructed channels; it thus adds the impetus of gravity to that of the current. When the levels of rivers fall in the dry season, and their flow diminishes, undershot wheels lose some of their power.

Indeed, if they are fixed to the banks of rivers, their paddles may cease to be immersed. One way this problem was avoided was by mounting the waterwheels on the piers of bridges and taking advantage of the increased flow there. Another common solution was provided by the shipmill, powered by undershot wheels mounted on the sides of ships moored in midstream.

On the rivers Tigris and Euphrates in the 10th century, in Upper Mesopotamia, which was the granary for Baghdad, enormous shipmills made of teak and iron could produce 10 tons of flour from corn every 24-hour period.

Gristmilling – the grinding of corn and other seeds to produce meals – was always the most important function of mills. Mills were, however, put to many other industrial uses. Among these applications were the fulling of cloth, the crushing of metallic ores prior to the extraction process, rice husking, paper making and the pulping of sugarcane.

The usual method of adapting waterwheels for such purposes was to extend the axle and fit cams to it. The cams caused trip-hammers to be raised and then released to fall on the material.

Where waterpower was scarce, the Muslims had recourse to the wind. Indeed it was in river-less Seistan, now in the western part of Afghanistan, that windmills were invented, probably early in the seventh century A.D. The mills were supported by substructures built for the purpose of the towers of castles or the tops of hills.

They consisted of an upper chamber for the millstones and a lower one for the rotor. A vertical axle carried either 12 or six rotor blades, each covered with a double skin of fabric. Funnel-shaped ducts pierced the walls of the lower chamber, their narrower ends facing toward the interior in order to increase the speed of the wind when it flowed against the sails.

This type of windmill spread throughout the Islamic world and thence China and India. In medieval Egypt, it was used in the sugarcane industry, but its main application was to grist-milling.

Now we turn to a type of engineering that is quite different from the utilitarian technology described so far. We may perhaps call it fine technology since its distinguishing features derive from the use of delicate mechanisms and controls.

Some of these devices had obvious practical uses: water clocks were used in astronomical observations and were also erected in public places; astronomical instruments aided both observation and computation.

Others gave amusement and aesthetic pleasure to the members of courtly circles. Still, others undoubtedly had didactic purposes, for example, to demonstrate the principles of pneumatics as understood at the time.

Apart from astronomical instruments and the remains of two large water clocks in Fez, Morocco, none of these machines has survived. Our knowledge of them comes almost entirely from two Arabic treatises that have come down to us.

The first is by the Bano (Arabic for sons of) Musa, three brothers who lived in Baghdad in the ninth century. They were patrons of scholars and translators as well as eminent scientists and engineers in their own right.

They undertook public works and geodetic surveys and wrote a number of books on mathematical and scientific subjects, only three of which have survived. The one that concerns us here is “The Book of Ingenious Devices”. It contains descriptions, each with an illustration, of 100 devices, some 80 of which are trick vessels of various kinds.

There are also fountains that change shape at intervals, a “hurricane” lamp, self-trimming and self-feeding lamps, a gas mask for use in polluted wells and a grab for recovering objects from the beds of streams. This last is of exactly the same construction as a modern clam-shell grab.

The trick vessels have a variety of different effects. For example, a single outlet pipe in a vessel might pour out first wine, then water and finally a mixture of the two. Although it cannot be claimed that the results are important, the means by which they were obtained are of great significance for the history of engineering.

The Banu Musa were masters in the exploitation of small variations in aerostatic and hydrostatic pressures and in using conical valves as “in-line” components in flow systems, the first known use of conical valves as automatic controllers.

In several of these vessels, one can withdraw small quantities of liquid repeatedly, but if one withdraws a large quantity, no further extractions are possible. In modern terms, one would call the method used to achieve this result a fail-safe system.

The second major treatise to have come down to modern times was written by al-Jazari at the close of the 12th century. He was a servant of the Artuqid princes, vasals of Saladin (who vanquished Richard the Lion Heart during the Third Crusade).

His work places him in the front rank of mechanical engineers from any cultural region in pre-Renaissance times.

Several of al-Jazary’s machines have been reconstructed by modern craftsmen working from his specifications, which provided far more detail than was customary in the days before patent law was invented. Such openness has rarely been encountered until recent times.