History of Technology in Islam (1) 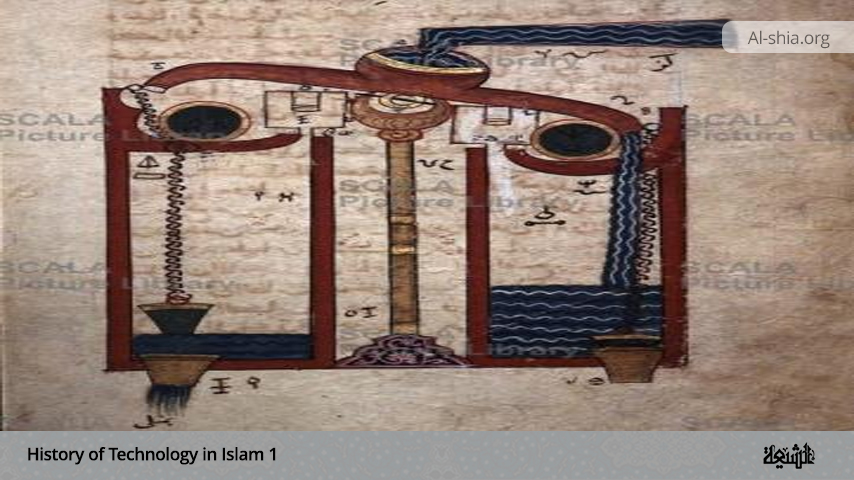 In this article titled “History of technology in Islam”, we shall be looking at “Mechanical engineering” as an engineering field to which Muslim scholars contributed immensely.

The West is accustomed to seeing its own intellectual development as having been shaped, in the main, by internal factors. This view of history traces our heritage back from the Industrial Revolution to the Enlightenment and Renaissance and, thence, via the monkish scribes of the Middle Ages, to the fountainhead: Greece, Rome and the ancient empires of the Fertile Crescent.

But the picture is incomplete because it ignores the inter-meditation of the civilization of Greek Christendom (or Byzantium), Hindu India, Confucian China and Islam.

Our subject here is the technology of medieval Islam – the knowledge it preserved, the new ideas it contributed to the medieval world and the inventions by which it anticipated later developments.

When the Prophet Muhammad died in AD 632, he left behind a new religion with its administrative centre at Medina and its spiritual heart at Mecca. Within about a year of his death, the rest of Arabia had joined the Muslim fold; by 750 the Arab Empire stretched from the Pyrenees to central Asia.

Although the advent of Islam brought immense political, religious and cultural changes, the technological traditions were largely unaffected.

In mechanical engineering, the Muslims adapted the techniques of earlier civilizations to satisfy the needs of the new society. These needs centred on a city life more extensive than any seen since Roman times.

Baghdad’s population is estimated to have reached about 1.5 million in the 10th century, and cities such as Cordoba, Cairo and Samarkand, although smaller, were still of considerable magnitude.

Paris, by contrast, would not number 100,000 souls for another 400 years. Feeding and clothing the inhabitants of the Islamic world’s vast urban centres placed great demands on agriculture and distribution.

These, in turn, depended on technology for supplying irrigation water to the fields and for processing the crops into foodstuffs. Water and water power, therefore, will constitute our first concern. Then we shall describe water mills.

Finally, we shall turn to descriptions, most of them in a handful of treatises that have come down to us, of water clocks, fountains and various automate, some of which might seem trivial to modern eyes.

Yet they exploit concepts, components and techniques that did not enter the armamentarium of European engineering until the time of the Renaissance. The most ancient water-raising machine is the shaduf, a counterweighted lever from which a bucket is suspended into a well or stream. It appears in illustrations from as early as 2500 BC in Akkadian reliefs and is still in use today in parts of the Middle East.

Other traditional water-raising machines, introduced between the third and first centuries B.C., include the screw, or water snail, whose invention is attributed to the great mathematician Archimedes. It consists of a helical wooden blade rotating within a barrel-like wooden cylinder, a design that could not push water up inclines greater than about 30 degrees, although 20 degrees was more common.

A higher lift was achieved by the Noria, a large wheel driven by the velocity of the current. On the outer rim, a series of compartments are fitted in between a series of paddles that dip into the water and provide the propulsive power.

The water is scooped up by the compartments, or pots, and is discharged into a head tank or an aqueduct at the top of the wheel. Norias could be made quite large. The well-known wheels at Hama on the river Orontes in Syria have a diameter of about 20 meters.

The noria is self-acting, and its operation thus requires the presence of neither man nor beast. It is, however, expensive to build and maintain. The “saqiya” is probably the most widespread and useful of all the water-raising machines that medieval Islam inherited and improved.

It is a chain of pots driven by one or two animals by means of a pair of gears. The animals push a drawbar through a circle, turning an axle whose pinion meshes with a vertical gear. The gear carries a bearing for the chain of pots, or pot garland – two ropes between which earthenware pots are suspended. The chain of pots is optimal for raising comparatively small amounts of water from comparatively deep wells.

Other mechanisms, however, were required to raise large quantities of water at relatively small distances. The problem can be solved by using a spiral scoop wheel, which raises water to the ground level with a high degree of efficiency.

The machine is very popular in Egypt nowadays, and engineers at a research laboratory near Cairo have been trying to improve the shape of the scoop in order to achieve maximal output. Although it appears very modern in design, this is not the case; a 12th-century miniature from Baghdad shows a spiral scoop wheel driven by two oxen.

These machines are still in use in many oil-poor middle eastern countries because for many purposes they are at least as efficient as diesel-driven pumps. Moreover, they do not require imported fuels, spare parts or labour.

Vital time can therefore be saved, when the loss of even a single day’s operation of a machine can kill a crop, making reliable performance literally a matter of life and death.

Given the importance of water-raising devices to the economy of many Islamic societies, it is hardly surprising that attempts were made to introduce new designs or modify existing ones. Some of the most interesting innovations are found in one section of Ibn al-Razzaz al-Jazari’s great book, The book of knowledge of Ingenious Mechanical Devices, which was completed in Diyar Bakr in Upper Mesopotamia in 1206 AD.

From our point of view, the most significant aspect of these machines is the ideas and components that they embody. For example, one of them is explicitly designed to eliminate out-of-balance loading and so produce a smoother operation.

Another incorporates a crank, the first known example of the non-manual use of this important component. Some of these devices functioned as curiosities. The invention containing the most features of relevance for the development of mechanical design, however, was intended as the practical machine for high-lift duties: a twin cylinder, water-driven pump.

A stream turned a paddle wheel meshing with a horizontal gear wheel, which was installed above a sump that drained into the stream. The horizontal wheel contained a slot into which a vertical pin fitted near the perimeter of the wheel.

The turning wheel moved two connecting rods back and forth, thus driving opposing pistons made of copper disks spaced about six centimetres apart, the gap being packed with hemp. The pistons entered copper cylinders, each one having a suction and delivery pipe. One piston began its suction stroke while the other began its delivery stroke.

This machine is remarkable for three reasons: it incorporates an effective means of converting rotary into reciprocating motion, it makes use of the double-acting principle and it is the first pump known to have had true suction pipes.

Waterpower was clearly a prominent concern of medieval Islamic planners. Whenever they mentioned a stream or river, for example, they often included an estimate of how many mills it would operate. One might say that they assessed streams for “mill power”.