Equality of man and Woman: The Quranic Viewpoint (2) 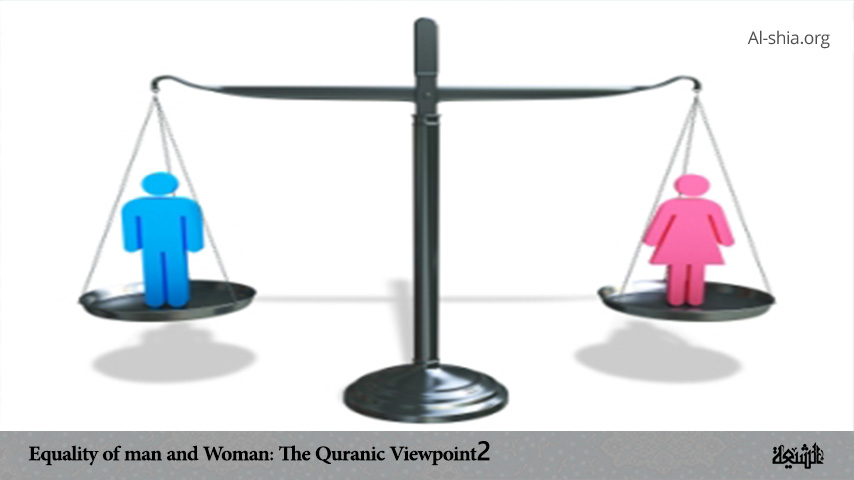 In this part of the article titled “Equality of man and Woman: The Quranic Viewpoint”, we shall focus on other relevant aspects of the topic here.

For the subject of marriage, the Qur’an has provided detailed guidance. We are told that marriage is the name of a contract between consentient adults who are believers in divine values.

It is clarified that women cannot be forced to get married and thus they have the right to express their will. The following verse tells us:

“O you who have faith! It is not lawful for you to inherit women forcibly, and do not press them to take away part of what you have given them unless they commit gross indecency. Consort with them in an honourable manner; and should you dislike them, maybe you dislike something while Allah invests it with an abundant good” (4:19)

Then again in (4:21), regarding marriage it is stated that women have taken a contract ‘meesaq’ from men;

“How could you take it back, when you have known each other, and they have taken from you a solemn covenant?” (4:21)

A contract or covenant (“meesaq” in Arabic) requires the free consent of both parties in agreeing to that contract. An agreement in which a person is forced to do something against his/her will does not constitute a “meesaq”. If the woman has been forced into getting married or the will of the man has been manipulated by coercion, then such an agreement does not become a contract or “meesaq”.

Thus for a contract of marriage to come about, both parties the man as well as the woman have to use their free will in coming to terms and agreeing to live the rest of their lives with each other. If out of these two anyone is forced or does not have their free will involved then such would not constitute a “meesaq”.

The main purpose of maintaining relations as a married couple is that love, compassion, and tranquillity should develop between man and woman.

In this way, they live a life of harmony and become a source of solace to each other. The Qur’an says:

“And of His signs is that He created for you mates from your own selves that you may take comfort in them, and He ordained affection and mercy between you. There are indeed signs in that for a people who reflect” (30:21)

The Qur’an has used the Arabic word “Zawj” for the husband-wife pair. This is an Arabic word which means such a pair which is complimentary to each other, and with the absence of one of its halves, the other gets incomplete.

Therefore, the husband and wife should be as such that they provide fulfilment to each other’s personality and become a source of nourishment for each other. Thus the husband-wife relationship is not that of a boss and his servant, but one of mutual companionship and comradeship.

To bring about such compatibility, it is essential that men and women have a unified outlook on life and maintain a coordinated stance on various matters.

Such a life, in which the life partners are in harmony with each other, will definitely be a life of exhilaration, and situations where people of conflicting tastes, views and ideologies are bound together, may result in kindling the fires of discontentment.

That is why the Qur’an has stated that believers should be paired with like-minded persons only, as otherwise if they selected spouses from the opposing camps, then that would cause discord. Thus we are reminded:

“Do not marry idolatresses (Polytheist women) until they embrace faith. A faithful slave girl is better than an idolatress, though she should impress you. And do not marry [your daughters] to idolaters until they embrace faith. A faithful slave is better than an idolater, though he should impress you. Those invite [others] to the Fire, but Allah invites to paradise and pardon, by His will, and He clarifies His signs for the people so that they may take admonition” (2:221)

The Qur’an has likened the husband and wife pair as “Garments” to each other, signifying the type of relations a Believing couple maintains:

Thus as nothing comes between us and our garments, then such should be the outlook that believers are to maintain towards their spouses.

A garment also protects us from the variation of climate and guards our shame, similarly, a couple which considers divine values as guidance for life, should protect each other from the harmful effects of society and guard each other’s weaknesses.

The Believers are instructed that they should treat their spouses with mercy and compassion and should not be harsh on them, even though something about their wives may seem displeasing to them:

“O you who have faith! It is not lawful for you to inherit women forcibly, and do not press them to take away part of what you have given them unless they commit gross indecency. Consort with them in an honourable manner; and should you dislike them, maybe you dislike something while Allah invests it with an abundant good” (4:19)

As seen women are equal to men in humanity and have lots of rights even though they gave direct allegiance to the Prophet based on Quran. So it is not right to say that Islam has put men above women and ignored women’s rights.

ARE MEN A DEGREE ABOVE WOMEN?

People having a narrow look at the guidance of Allah’s Book, are often seen intimating that men are superior to women.

They back up this statement just by a portion of verse 2:228 of Surah Al-Baqara, and do not present the whole context, but rather reach this short-sighted conclusion and imply that Islam maintains the superiority of men against women.

It is an irony that the very verse which equates rights and obligations of gender is usually quoted to say that men are superior to women.

What they fail to realize is that in matters of biological construction men and women are different and have certain rights related to that aspect (maternity leaves are for women, not men) but apart from biological disposition, both men and women are equal according to the Qur’an and both are equally capable and responsible for developing those qualities in themselves which the Qur’an has said are essential for believers.

“..And they (women) shall have rights similar to the rights against them in a just manner” (2:228)

In other words, for every responsibility given to them, they acquire a right. This is the equality they have been granted. Thus men and women have the same rights as each other. The above verse continues to say:

“..and they have rights similar to the rights against them in a just manner, and men have a degree above them” (2:228)

One gender cannot be superior to another if their rights and obligations are equal. The word used by the Quran is “Daraja” meaning “degree”. This “degree” can be understood easily by reviewing the whole verse. The context of this verse informs us that it deals with the conditions attached to remarriage after divorce. The verse is:

“Divorced women shall wait by themselves for three periods of purity [after menses], and it is not lawful for them to conceal what Allah has created in their wombs if they believe in Allah and the Last Day, and their husbands have a greater right to restore them during this [duration] if they desire reconcilement. The wives have rights similar to the obligations upon them, in accordance with honourable norms; and men have a degree above them, and Allah is all-mighty and all-wise” (2:228)

The context of the verse makes it clear that the divorcee should refrain (from remarriage) for three menstrual cycles so that whatever has been created by Allah becomes pronounced then it goes on to say that men have one advantage.

Obviously, an advantage in a peculiar situation does not mean one is superior to the other. It is only for this reason that men have one degree above women, because of their biological construction they do not have to wait for a stated period for the purpose of getting married again upon divorce or if their spouse dies.

Only in the matter men have a degree higher than women, but apart from this, both have equal rights.