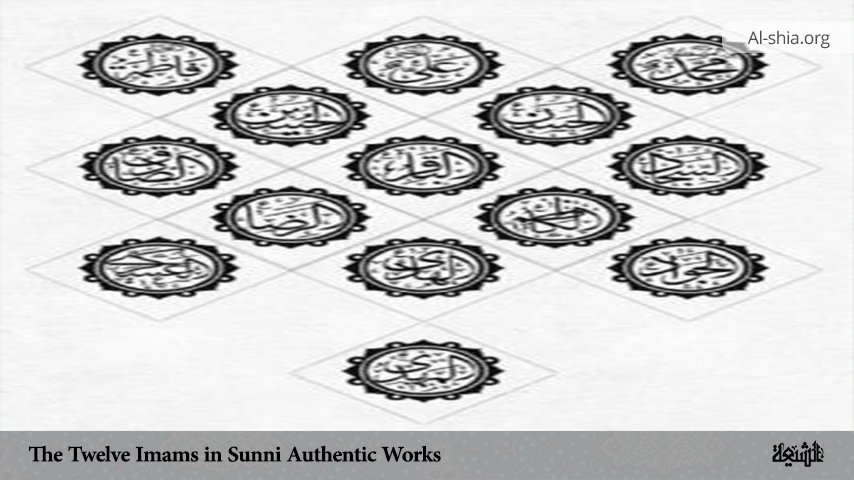 In Shia Islam, Imamate is one of the fundamentals of religion (Usul al-Deen) and the Shia believe in the leadership of the Twelve Imams (a.s)  from the Prophet’s Household (Ahl al-Bayt); those who are considered the successors of the Prophet (s.a.w.a) and the guardians and leaders of the society after his death. Meanwhile, there are many reports from both the primary and reliable sources of both the Sunni and Shia to support it. In light of this, we shall focus on the reliable Sunni references about the doctrine of the twelve Imams in this article.

The Traditions on the Twelve Imams

After proving the Imamate and the Caliphate of Imam ‘Ali, peace be upon him, we will mention the Traditions in relation to the other Imams.

There are repeated Traditions in the Sunni and Shi’ite books in our hands today which speak about the Caliphate of the twelve Imams and Caliphs after the Holy Prophet. These can be found in many of the famous Traditions of the Sunnis, like Sahih Bukhari, Sahih Tarmadi, Muslim Sahih Abu Dawoud and Musnad Ahmad.

In the book Muntakhib al-A thar, there are 271 traditions (hadith) in this area which have been recorded and a large part of them are from Sunni scholars. As an example, the Sahih Bukhari, the most famous book of the Sunnis says, “Jabir ibn Samarah says, ‘I heard the Prophet say, “There will be twelve leaders after me”. Then he said, ‘I heard that my father said he heard Prophet say, “They will be from the Quraysh..” (1)

In Sahih Muslim, this same tradition has been recorded in this way that Jabir says, “I heard the Prophet Say ‘Islam will always be dear until twelve caliphs and successors.” Then he said something which I did not understand. I asked my father and he said, ‘The Prophet said, “They are all from the Quraysh.” (2)

In Musnad Ahmad, it has been recorded from Abdallah ibn Mas’ud, a famous companion, that he asked the Prophet about his vicegerents. He said, “They are twelve people like the Israeli tribes who were twelve people.” (3)

The Meaning of this Tradition

In some books of the traditions, the power of Islam is referred to as being a pawn in the twelve caliphs and in others, the survival and life of religion are in the hands of a group of them until the Day of Resurrection and all are from the Quraysh. In some, all of them are mentioned as being of the Bani Hashim. However it be, this Tradition does not conform to any sect except the Shi’ite because its explanation is very clear according to Shi’ism where the ulama of the Sunnis are at an impasse trying to explain it.

Does it refer to the first four caliphs and then the Umayyad and Abbasid caliphs? Whereas we know that the number of the first caliphs was twelve, but they did not end with the Umayyads or the Abbasids and the number twelve does not conform to anything.

In addition, among the Umayyad, there are people like Yazid and among the Abbasids, people like Mansur Dawaniq, and Harun al-Rashid, the oppression, arrogance and crimes of whom no one can deny and it is not possible that they are considered to be the Caliphs of the Prophet and among the honour of Islam. No matter how much we simplify the criteria, they clearly do not include them.

And beyond these, the number twelve only can apply to the Shi’ites. It is better that we now turn to a famous scholar, Sulayman ibn Abraham Qaduzi Hanafi in Yanabi‘a al-Muwwadat. “Some of the scholars have said that, ‘The Tradition which mentions the rule of the caliphs after the Prophet are twelve people is famous and it has been recorded in many places.

What we can surmise is that, after the passing of time, what the Prophet of God was referring to was twelve successors from the Ahlul Bayt and his family because it is not possible that this tradition refers to the first caliphs because they are only four people and it does not conform to the Umayyads because they were more than twelve people and all of them, other than Amr ibn Abdal Aziz were oppressors and also, they were not from the Bani Hashim and the Holy Prophet said, “All twelve are from the Bani Hashim.”

When Abdal Malik ibn Umar records from Jabir ibn Sahrah and how the Prophet quietly said who they were from, he bore witness to what he said because some people were not happy about the caliphate of the Bani Hashim and the Tradition does not conform to the Bani Abbas, either, because they were more than twelve people and beyond this, they did not conform to the verse: “No reward do I ask of you except the love of those near of kin…” (4)

Thus, the tradition only can relate to the twelve Imams of the Ahlul Bayt and the family of the Prophet. It refers to those whose knowledge is higher than that of any others, whose piety is unquestioned and from all points of view, are more knowledgeable and who gained their knowledge from the Prophet of Islam.

That which confirms this view is the tradition of Thaqalayn and many other traditions which have come from the Prophet (5). It is interesting to note another commentary upon this tradition, “Perhaps by twelve caliphs and Amirs it is the first four, who existed at the beginning of Islam and the other eight have not appeared yet but will come in the future!”

In this way, it denies the relation and unity of the caliphs mentioned in the tradition of the Prophet which is so clear. But what we wish to say is that what is the necessity for commentary upon a Tradition which is so clear and conforms to the twelve Shi’ite imams and instead causes oneself to fall into these pits and crevices?

The Imams by Name

It should be noted that in some of the Traditions which have reached us from the Sunnis, the names of the twelve Imams have clearly appeared and their names specified! Shaykh Sulayman Qanduzi, a famous Sunni scholar, in the book, Yanabi’ al-Muwwadah says,

“A Jewish man named Na’thal went to the Prophet and among the questions, he asked who would succeed him. The Prophet said, specifying them, “After me, ‘Ali ibn Abi Talib and then my two Sons, Hasan and Husayn and after Husayn, nine Imams will follow from his children.”

In that same book, another tradition is quoted from Kitab Manaqib with their titles and it indicates that Imam Mahdi is in occultation and then he will arise and replace the oppression and tyranny which exists upon the earth with justice (7). Of course, there are many Traditions relating to this in Sunni sources “Whoever dies and does not know his Imam of Time”.

These traditions clearly show that a pure Imam lives at every age and must be recognized and whosoever does not do so, it is as if he had lived in an age of kufr and ignorance. Is the Imam referred to in this tradition as the same person who rules the people? Ghengis, Haruns and dependent leaders? Doubtlessly, the answer is negative because many of these leaders are corrupt and oppressors sometimes act according to the East or the West and depend on the orders of foreign governments and they will clearly be sent to hell.

Thus, it becomes clear that in every period, there is an infallible Imam who must be found and recognized. Of course, proof of the Imamate of each Imam and the traditions of each Imam who would follow, all exist.