Imamate in the Quranic “Verse of Trial” 4 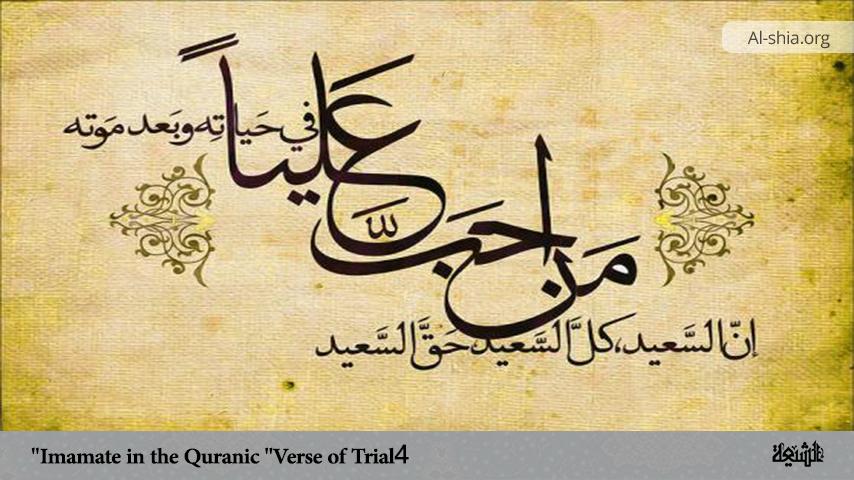 In this part of the article titled “Imamate in the Quranic Verse of Trial”, we shall discuss the status of Imamate and the Imams as explained by one of the pure Imams from the Prophet’s progeny; Imam Ali ibn Musa al-Reza (a.s)

What an idea! Intellects are lost, visions are weary, the eminent is little, the sage had bewildered, orators have fallen short to give a speech, poets have been tongue-tied, men of literature have failed and the eloquent have not been able to describe a single feature or single merit of the Imam, for the Imam is like a star, too distant for men to reach or for describers to describe.

Do you imagine that these attributes are found in other than the family of the Prophet (s.a.w.a)? I swear by God that, the souls that have cheated them and their illusion have made dire them deviate (from reality). They have taken a steep road where their legs take them to degradation. They relayed on their defective minds in their conception of the (office of) Imamate, therefore they have gone astray and deviated (from the divine command) so much so that they have too far from him, “May Allah destroy them, how they are turned away” (1)

Having distanced themselves from the choices of God, His messenger and the Prophet’s Household, they followed their own inclinations, although the Qur’an addresses them as it states:

“And your Lord creates and chooses whom He pleases; to choose is not theirs” (2)

“And it behaves not a believing man and a believing woman that they should have any choice in their matter when Allah and His Apostle have decided a matter” (3) “How do you judge?” (4)

“Or have you a book wherein you read? That you have surely therein what you choose? Or have you received from us an agreement confirmed by an oath extending to the day of resurrection that you shall surely have what you demand? Ask them which of them will vouch for that. Or do they have associates if they are truthful” (5)

“Do they not then reflect on the Qur’an? Nay, on the hearts there are locks” (6)

“…they said, we hear, but they did not obey. Surely the vilest of animals, in Allah’s sight, are the deaf, the dumb, who do not understand. And if Allah had known any good in them He would have made them hear, and if He makes them hear they would turn back while they withdraw”. (8)

How can they ever venture to elect the Imam? he is one in whose sphere of knowledge ignorance has no place; he is a leader who knows no fear, nor does he retreat; he is the substance of divinity and sanctity, purity, asceticism renunciation; knowledge and worship of God.

He has been singled out in the Prophet’s supplications, he is a descendent of the Pure Fatimah, God’s peace be upon her; he is one whose lineage no one can question, he enjoys a unique honourable station, he comes from the Quraysh and is the pinnacle of the Hashim clan, a descendant of the holy Prophet, may God’s peace and blessing be on him, and the object of God’s good pleasure the honour of the noble.

The offspring of Abd Monaf, praiseworthy who is known for his thriving knowledge and endless forbearance, fully competent in imamate and aware of politics, obeying him is mandatory for Muslims, he upholds God’s command, offers counselling to God’s servants, and protects God’s religion. Surely God gives success to Prophets and Imams and grants them of his stored knowledge and wisdom, what he has not given to any, and so their knowledge is beyond that of the people of their time, as God has said,

“Is He who guides to the truth more worthy to be followed, or he who himself does not go aright unless he is guided? What is the matter with you; how do you judge?” (10)

“And whoever is granted wisdom, is given a great good”. (11)

Or, referring to Saul he has said “Surely Allah has chosen him in preference to you and has increased him abundantly in knowledge and physique, and Allah grants His kingdom to whom He pleases, and Allah is Ample–giving, Knowing”. (12)

God, the Mighty and High address His Messenger when he says,

“And Allah has revealed to you the Book and the wisdom, and He has taught you what you did not know; Allah’s grace to you is very great” (13)

As regards the Imams from the Household of the Prophet, God, the Most High, has said,

“Or do they envy the people for the grace that Allah has given them? We gave the people of Ibrahim the Book and the wisdom, and we gave them a grand kingdom. So some of them believed in him and some turned away from him, and hell is sufficient to burn” (14)

When God appoints someone to manage the affairs of His servants, He expands his breast for it, deposits fountainheads of wisdom gush in his heart, and inspires him with abundant knowledge that enables him to answer any question and not to deviate from the right path.

That is, the Imam is fully immune from sin and error, is singled out for this by God to be God’s proof over His servants,

“This is Allah’s grace, He gives it to whom He pleases and Allah is Ample–giving, Knowing”. (15)

Do people have the ability to elect such a person? Or does their candidate enjoy such qualities? I swear by the house of God that these people have transgressed the right they have been entitled to, And they threw the Book of Allah behind their back as if they knew nothing” (16)

“And who is more erring than he who follows his low desires without any guidance from Allah? Surely Allah does not guide the unjust people” (17)

“greatly hated is it by Allah and by those who believe. Thus does Allah set a seal over the heart of every proud, haughty one”? (19)

“May God’s abundant peace and blessing be upon the Prophet Mohammad and his descendants”! (20)