The Significance of Congregational Prayer 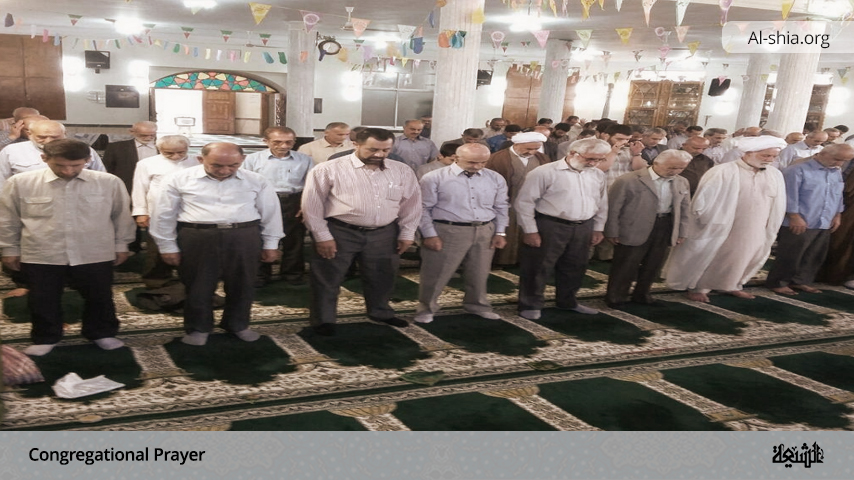 Islam ordained congregational prayer and emphasized it in the compulsory prayers except for the prayer of al-Tawaf (circumambulation) prayer during Hajj, and al-Nawafil Prayers (voluntary prayers). It made it compulsory in al­Jumu’a prayer (Friday prayer) and al-Eid prayers (festival prayers) as a display of (group) worship and a means of unity, brotherhood, and equality between Muslims.

“Whoever offers his evening prayer, night prayer, and noon prayer in congregation in the mosque, it is as if he had spent the whole night worshipping”. (1) “Congregational prayer is 25 times better than individual prayer”. (2)

“Allah is obliged toward His servant, who has prayed in a congregation then asked him something, to grant him what he asked before leaving.” (3) “Whoever offers the five daily prayers in congregation, people will think good of him”. (4)

In congregational (al-Jama’a) prayers, the worshippers, arrayed in lines, turn towards Allah with one heart and one mind. They stand facing one qiblah, one Lord, harbouring the sense of the entire humanity’s directing itself to Allah, unity of the community, and taking the same path in life. Through all this, the devotee is involved in the process of dissolving himself in the movement of people towards achieving human unity, as if a single soul and moving in the same direction. This exemplifies the definition of agreement and the community’s submission to Allah’s will – in unison with other created beings and existing objects – in their forms of group worship.

The devotees in the congregation are actually a column of souls comprising an entity of unified members that supplicate and beseech Allah in quest of nearness and in search of spring of the sacred divine love. This ultimately intensifies the sense of humbleness in the depths of the worshippers and confers on the prayer an atmosphere of sacredness and glory. Not only does the al-Jama’a (general congregational prayer as distinct from Friday congregational prayer) reach these objectives but exceeds this to fulfil its reformative role in the life of the community and the individual.

In the group prayer, the acquaintance between the worshippers is achieved. Brotherhood, love, and peace are solidified. All devotees feel they are equal, humble, and exalted owing to their standing in the same position, reciting similar words, performing expressive, symmetrical actions, and turning toward one Lord. Their position inspires them with the feeling of the value of humanity and the equality of all human beings in front of Allah. Meeting each other, and cooperating to establish benevolent projects, like helping the needy and visiting the sick, are some fruits of the daily congregational prayers.

Sermons are given in the prayer gathering so the community’s religious education gradually increases; its social conscience awakens; its political and ideological awareness blossoms and the way of goodness and righteousness is clearly identified. Consequently, Islam exhorts Muslims to attend al-Jama’a prayers, particularly al-Jumu’a prayer. The Qur’an declares:

“O you who believe! when the call is made for prayer on Friday, then hasten to the remembrance of Allah and leave off trading; that is better for you if you know.” (5)

Due to the previously cited reasons, congregational prayer is of paramount importance in Islam. Consequent to the above-mentioned realities, Islam made it clear that al­Juma’a prayers should be attended by men and women and even prisoners, who are to be temporarily released on Fridays and the two Eids (festivals), to attend the prayers and then return to detention.

It is reported from Imam Ja’far al-Sadiq (a.s) that he said:

“Surely the Imam (leader of the prayer) should release the prisoners on Fridays and the Eids and send with them someone who teaches them their religion. When, then, they have offered their prayers on Friday and the Eids, he returns them to the prison”. (6)

“The sermon on Friday prayer was ordained because Friday is a day whereon Muslims congregate. So Allah made it a means for the imam to advise them, encourage them to obedience, frighten them into abstaining from sin, show them the true interests of their religion and life and convey to them the news reaching him from far-flung areas, which tells of what is harmful and beneficial. Two sermons were ordained so that the first is exclusively for the praising and glorification of Allah, the Most Exalted, while the second one addresses the needs, permissions, warnings and supplications, whereby Allah wants to teach the worshippers what He orders them to do and what He forbids them from doing, thus defining for them the righteousness and deviation.” (7)

Imam Ali (a.s) was quoted as having said:

“The Messenger of Allah warned Muslims not to talk on Friday during the sermon of the imam. Whoever does it he speaks nonsense and he who speaks nonsense, his worship on Friday is not accepted”. (8)

These unambiguous Islamic texts are sufficient to urge us to pay more attention to group prayers, keep them, and attain their aims, especially when Islam strongly underscores the necessity of not abandoning congregational prayers or mosques. Many narratives and traditions were conveyed to this effect. The Prophet (S) said:

“Whoever does not offer his prayers in the mosque with the Muslims and has no legal excuse, surely his prayers are not accepted”. (9)

Imam al-Baqir (a.s) is quoted as having said:

“Whoever lives near the mosque and does not offer his prayers in it, without being sick or busy, surely his prayers are not accepted”. (10)