Why the School of Ahlul-Bayt? 1 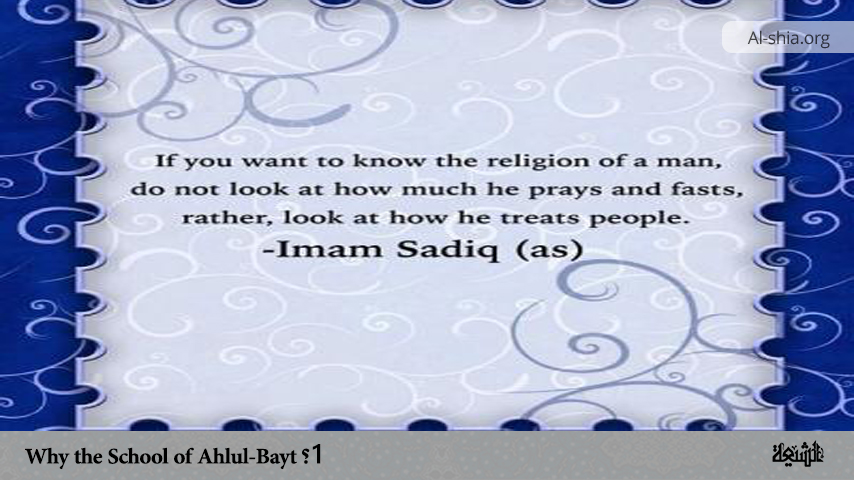 The purpose of this article is merely to demonstrate that Shia views about the special importance and the leadership of Ahlul-Bayt do not come out of the blue. In this way, I hope to contribute to better understanding among Muslims and hence help to reduce some people’s hostility against the followers of the members of the House of the Prophet (PBUHH). The fact that we (Shia) have adopted a creed which differs from that of the Ash’arites as far as the fundamental beliefs are concerned, and differs from the four schools of Sunni jurists as far as the laws, rites, and observances are concerned, is not due to any sectarianism or prejudice. It is rather the theological reasoning which has led us to adopt the creed of those Imams who belong to the Ahlul-Bayt of the Holy Prophet, the Messenger of Allah (PBUHH).

We have, therefore, wholly and solely bound ourselves to them in our observances as well as our beliefs; in the derivations of our knowledge of the Quran and the Sunnah of the Prophet; and in all our material, moral and spiritual values on the grounds of theological and logical proofs. We have done this in obedience to the Holy Prophet and in submission to his Sunnah. Had we not been convinced by these proofs to disallow all Imams except the Ahlul-Bayt, and to seek to draw near to Allah only through them, we might have inclined towards the creed of the majority for the sake of unity and fraternity.

But incontrovertible reasons command a believer to follow the truth regardless of all other considerations. The majority of Muslims are unable to produce any argument to show which of their four different jurists is the best. It is impossible to follow all of them, and therefore, before one can say that it is “compulsory” to follow them, one has to prove which one must be followed. We have pondered over the arguments of the Hanafis, the Shafi’is, the Malikis and the Hanbalis with the eyes of a seeker of truth and we have searched far and wide, but we have found no answer to this, except they were all acclaimed as very great jurists and honest and just men.

But you are fully aware that jurists’ capacity, honesty, justice and greatness are not monopoly of these four persons only. Then, how can it be “compulsory” to follow them only? We do not think that anyone can hold that these four Imams are in any way better than our Imams, the pure and holy descendants of the Prophet (PBUHH), the Ark of Salvation, the Gate of Repentance, through whom we can attain protection against disagreement in religious matters; for they are the emblems of guidance and the leaders towards the straight path. But alas, after the demise of the Holy Prophet (PBUHH), politics began to play its part in the affairs of religion and you know what took place in the heart of Islam as a result. During all these periods of trials, the Shia continued to hold fast to the Qur’an and the Imams of Ahlul-Bayt whom the Holy Prophet left among us as the two most weighty things (al-Thaqalain). There have been some extremists sects (al-Ghulat) which appeared every now and then in course of the history of Islam; nonetheless, the main body of the Shia have never deviated from this path since the time of Imam Ali and Fatimah (peace be upon them) up to the present day.

Abu Hanifa described his feelings (when he entered the palace of al-Mansoor and found Imam Ja’far al-Sadiq (AS) sitting with him) by saying: “When I saw Imam Ja’far, I felt his personality commands more respect than that of the Caliph himself. Yet the Caliph was ruling the Muslim World, and Imam Ja’far was a private citizen.”(2) Malik (the other Sunni Imam) said: “I used to come to Ja’far Ibn Muhammad (AS) and went to him for a long time. Whenever I visited him, I found him praying, fasting, or reading the Quran. Whenever he reported a statement of the Messenger of God, he was with ablution. He was a distinguished worshipper who was unconcerned with the material world. He was of the God-fearing people.” (3)