The Family , Marriage and Divorce 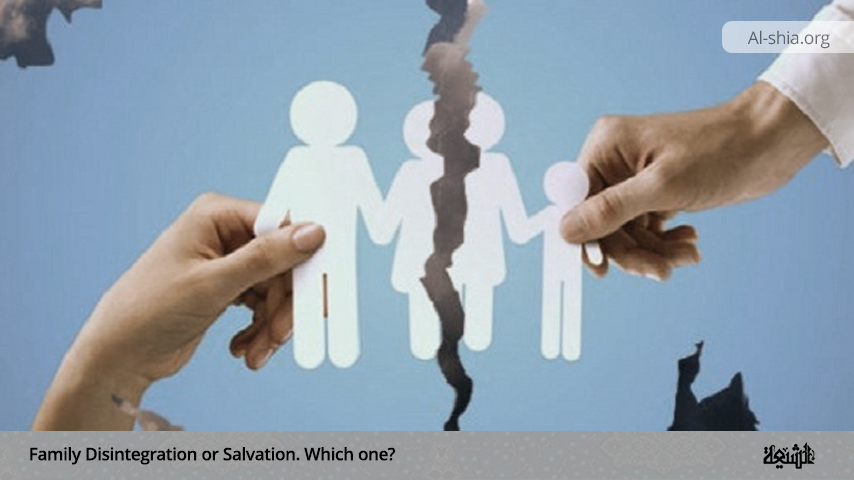 Figures also speak of the tragedy of the family under materialistic civilization and man’s loss of matrimonial harmony and psychological stability, which is never attained except in close-knit families. Women Own (October 1985) draws a horrible picture of the communities that turn their backs on religion and marital values. That magazine notes that in the U.K., one child out of every six born in 1984 was illegitimate. According to statistics concerning married women, two out of every five (those who continued their marriage between 5-15 years) admitted to having had extramarital relationships.

The number of rape cases increased by 27% during the first six months of the current year compare to the same period last year. The Home Office disclosed that some 780 rape cases were reported in England and Wales alone, compared to the official figure (613) during the first half of 1984.

Reuter News Agency (December 2, 1985) said in a wire service report that an average of four children are killed every week in Britain by their parents according to the National Society for the Prevention of Cruelty to Children. The spokesman for the society said: The problem is far more dangerous than anyone can imagine. He disclosed that the most fearful figure is that nearly 200 children die every year as a result of their parent’s crimes.

In addition to that, every fortnight, one British child is slaughtered by his other relatives. A Sinhalese newspaper disclosed that 1,000 Sri Lankan children die daily in Colombo alone. A report published in The Sun spoke of great numbers of women going to Colombo to get rid of their illegitimately conceived fetuses through abortion.

Moving away from the natural man-woman relationship, and the proliferation of adultery, debauchery, immorality and homosexuality and other perversities, have brought on venereal disease epidemics such as syphilis, gonorrhea, and AIDS. These diseases have become rife and represent truly terrible threats to man.

The Sunday Times warned in a report that the British may face the possibility of the death of 10,000 people before the end of the current decade as a result of AIDS. The report further added that the figures concerning AIDS nearly doubled every 9 months and that Britain, which had 512 cases of AIDS, was on the same level as the U.S. four years earlier. The report lashed out at the lax attitude of the British to the potential threat of AIDS, noting that the health authorities were late in realizing the alarmingly appalling dangers created by this virus.

Another report stated: The most appalling of the venereal diseases which threaten the entire western population is the newly discovered disease known as AIDS. It compelled people to review the entirety of sexual relations between men and women. This disease spreads like fire in the straw, particularly in the U.S., where millions of people suffer from it.

So far, no cure has been discovered to check it. It is a result of illicit sexual relations and sexual perversity. Slowly and dreadfully, the victim of this disease dies after the collapse of his immune system. The World Health Organization reports that between five and 10 million people are carriers of AIDS. This figure is likely to go up rapidly to somewhere between 100 and 200 million before the end of this century if no effective measures are taken to stem the tide of AIDS (1).

Because of loss, suffering, homelessness, nervous and psychological diseases, helpless man has taken refuge in alcohol and drugs in a bid to escape his painful existence. This has led to suicide, murder, and the total degradation of the human spirit.

The U.S. Department of Health disclosed that 5.8 million people were addicted to cocaine in 1985. Approximately 19% of the American population had taken marijuana, cocaine or other drugs at least once in 1985 (3). The former Soviet Union estimates 40 million Russians are addicted to alcohol. Jeune Afrique, the Paris-based magazine, wrote that 60% of traffic accidents and 40% of divorces are attributable to alcohol (4).

These statistics clearly show us that the tragic consequences of materialistic life which has discarded belief in God, morals, and spiritual values. We can see by these statistics the degree of man’s suffering, the deep bitterness of his life and the worry, hunger, pain, loss and terror that has diminished his happiness and stability.

These ‘signs’ call on every sane person to contemplate these facts and shoulder his human responsibility to rescue himself and his fellow man from the catastrophe looming over the world. Let’s review our way of thinking, the system of our society, the formation of our mind, our ideology, the quality of our civilization and our knowledge so we can escape the fire that has laid waste our serenity and scientific and social achievements.

Civilization that does not believe in true faith, moral and religious values, has made man feel bored and lost. It has deepened his convictions of the meaninglessness of life. The philosophical base on which contemporary materialistic civilization is built is rooted in denying the existence of God, refusing moral and religious values, believing in the materialistic world alone and seeking sensuous and physical pleasures.

Humanity chose this path only to incur unspeakable woes on itself. If man wants salvation he should search for the real goal of his life and the world around him. How did it begin? What is his responsibility? What system of life should he adopt to be in harmony with the world around him? Let’s look for an answer to the origin of existence.