Equality of man and Woman: The Quranic Viewpoint (1) 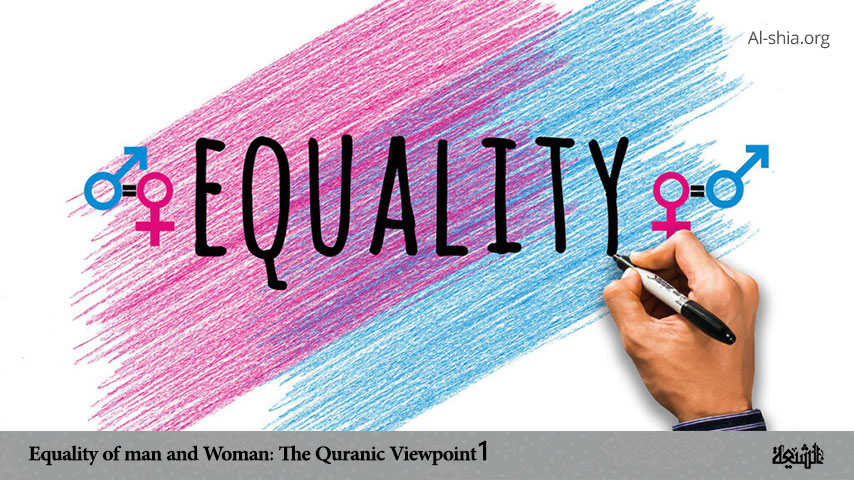 The status of women in Islam has often been a subject of controversy. Among many, the image of a Muslim woman is viewed as one under oppression and domination of males, confined within the boundaries of her home, not having the opportunity to express herself or take part in public life.

Such misconceptions are due to the fact that non-Muslims are seldom presented with the Qur’anic directives concerning the rights and responsibilities of women and usually, their perception of Islam is based on the traditions and cultural practices of certain individuals specific within a locality, which are then stereo-typed as legitimate Islamic practices.

This grave situation results due to the fact that the Muslim world of nowadays has distanced itself from Allah’s Book, and the majority of those who may identify themselves as Muslim, are themselves unaware of its contents, and instead blindly follow the doctrines of the sect in which they are born into, assuming them to be consistent with the Qur’an.

It should be understood that when we say something is Islamic, then what exactly is the authority for that matter? Is something Islamic, just because people who may apply the label of a Muslim on themselves are practising it?

Even a mere superficial study of the Qur’an makes it evident that the final authority for all matters of Islam lies with the Book of Allah. Whatever is confirmed by the Qur’an, is valid as an Islamic practice, and what is refuted or resented by it, is not.

Hence the following article presents what is that status that the Qur’an has given to women. The Qur’anic directives for this matter should be considered as the final authority, and opinions or actions of those who label themselves as Muslims or associate themselves with Islam should be judged in the light of the Holy Qur’an, and should not be accepted as ‘Islamic’ if they are refuted or resented by the Qur’an.

The Qur’an declares that the male and the female are equal in status and utility as both have been created by Allah.

“O mankind! Be wary of your Lord who created you from a single soul, and created its mate from it, and…” (4:1)

Discarding the Biblical story where Eve is held responsible for Adam’s temptation and expulsion from Heaven (See Genesis 2:3), the Qur’an states that both Adam (man) as well as his pair (woman) were equally tempted by Satan, both of them tasted of the forbidden fruit, both of them were equally admonished for their forgetfulness, and both repented and their repentance was accepted by their Sustainer.

This is stated in the following verses of Surah Al-Araaf:

“Then He said to Adam, ]” O Adam, dwell with your mate in paradise, and eat thereof whence you wish; but do not approach this tree, lest you should be among the wrongdoers- Then Satan tempted them, to expose to them what was hidden from them of their nakedness, and he said,” Your Lord has only forbidden you from this tree lest you should become angels, or lest you become immortal- And he swore to them,” I am indeed your well-wisher – Thus he brought about their fall by deception. So when they tasted of the tree, their nakedness became exposed to them, and they began to stitch over themselves with the leaves of paradise. Their Lord called out to them,” Did I not forbid you from that tree, and tell you,” Satan is indeed your manifest enemy? – They said,” Our Lord, we have wronged ourselves! If You do not forgive us and have mercy upon us, we will surely be among the losers.” (7:19-23)

Earlier in Surah Al-Baqara, it was also said that both man and woman, were tempted by Satan:

“Then Satan caused them to stumble from it, and he dislodged them from what they were in; and We said,” Get down, being enemies of one another! On the earth shall be your abode and sustenance for a time.” (2:36)

Thus it is clear from the above that the Qur’an maintains that both men, as well as women, were created out of one source material (one soul) ‘A Single Self’, and both men and women were equally responsible for their expulsion from the Garden.

The Qur’an does not harmonize with the view that the first woman was created from a man’s rib or that she was the one who caused humankind to be expelled from Heaven.

In a society which is governed by superstition, ignorance and the self-interest of the elite, the female gender is oppressed to the fullest extreme and she is always considered a lowly being in comparison to men.

Her rights are usurped by the influential class and she seldom has the opportunity to voice her grievances.

The Qur’an detests such a mentality which considers females to be of lower worth than males, for we are clearly told that in the sight of God, every human child, regardless of race, gender, or social affiliation is equally honoured and worthy of respect:

“Certainly We have honoured the Children of Adam” (17:70)

The Qur’an informs us that in a society of unbelievers, the female gender is despised and a son is preferred over a daughter. In Surah Al-Nahl their mentality is identified:

“When one of them is brought the news of a female [newborn], his face becomes darkened and he chokes with suppressed agony- He hides from the people out of distress at the news he has been brought: shall he retain it in humiliation, or bury it in the ground! Look! Evil is the judgement that they make” (16:58-59)

In such a society, the female gender is not only despised but she is also deprived of the nourishment that was to be meant equally for her as well as her male counterpart.

The unbelievers are identified to restrict females from the sustenance that was meant for the consumption of both genders, on the basis of self-made traditions:

“And they say,” That which is in the bellies of these cattle is exclusively for our males and forbidden to our wives. But if it be still-born, they will all share it.” Soon He will require them for their allegations. Indeed He is all-wise, all-knowing” (6:139)

Such is the treatment imparted by the unbelievers to the feminine gender. Any society, where males are preferred over females, where females are deprived of their essential nutrition, such should be identified as a society of disbelievers in divine values, for Allah has informed us in His Book, that the birth of a male or a female is in accordance with His laws of nature and not something to raise discrimination against:

A child is born not only of a father but also of a mother, therefore it should not be subjected to any bias on account of its birth:

“O mankind! Indeed We created you from a male and a female and made you nations and tribes that you may identify yourselves with one another. Indeed the noblest of you in the sight of Allah is the most God-wary among you. Indeed Allah is all-knowing, all-aware” (49:13)

Now let us proceed to see what would be the status of women in a society which is governed by Quranic principles.

The Qur’an has stated that the acquisition of education is compulsory for all believers. About the messenger it is stated that he taught the Book of Allah to his audience, which included men as well as women:

“It is He who sent to the unlettered[ people ]an apostle from among themselves, to recite to them His signs, to purify them, and to teach them the Book and wisdom, and earlier they had indeed been in manifest error” (62:2)

In the acquisition of knowledge, women are also included, as the wives of the Prophet (PBUH) were commanded:

“And remember what is recited in your homes of the signs of Allah and wisdom. Indeed Allah is all-attentive, all-aware” (33:34)

Thus the Qur’an has stipulated that women should also be educated and trained to know the realities of life.

The Qur’an informs us that women in a Qur’anic society not only have the right to express themselves freely but she is in such a position that they may even argue and hold discussions with the head of the community.

The messenger of Allah (PBUH) who was not only the divine emissary to his people but also the first head of the Islamic state, gave so much freedom in a society that the people, including women, were in a position to argue with him. The Qur’an records this in the 58th Surah titled “Al-Mujadilah”. We are informed:

“Allah has certainly heard the speech of her who pleads with you about her husband and complains to Allah. Allah hears the conversation between the two of you. Indeed Allah is all-hearing, all-seeing” (58:1)

Women are also to take an active part in public life. In Surah Al-Mumtahina we are informed of their public allegiance to the Prophet:

“O Prophet! If faithful women come to you, to take the oath of allegiance to you,[ pledging ]that they shall not ascribe any partners to Allah, that they shall not steal, nor commit adultery, nor kill their children, nor utter any slander that they may have intentionally fabricated, nor disobey you in what is right, then accept their allegiance, and plead for them to Allah for forgiveness. Indeed Allah is all-forgiving, all-merciful” (60:12).

Along with men, women were also included in these public discussions with the office bearers of the Islamic state:

“O you who have faith! When faithful women come to you as immigrants, test them. Allah knows best[ the state of ]their faith. Then, if you ascertain them to be faithful women, do not send them back to the faithless. They are not lawful for them, nor are they lawful for them. And give them what they have spent[ for them ]. There is no sin upon you in marrying them when you have given them their dowries. Do not hold on to[ conjugal ]ties with faithless women. Ask[ the infidels ]for what you have spent, and let the faithless ask for what they have spent. That is the judgment of Allah; He judges between you; and Allah is all-knowing, all-wise” (60:10).

Continued on the next article: http://Equality of man and Woman: The Quranic Viewpoint (2)