Criticisms Levelled by the Opponents of Hijab 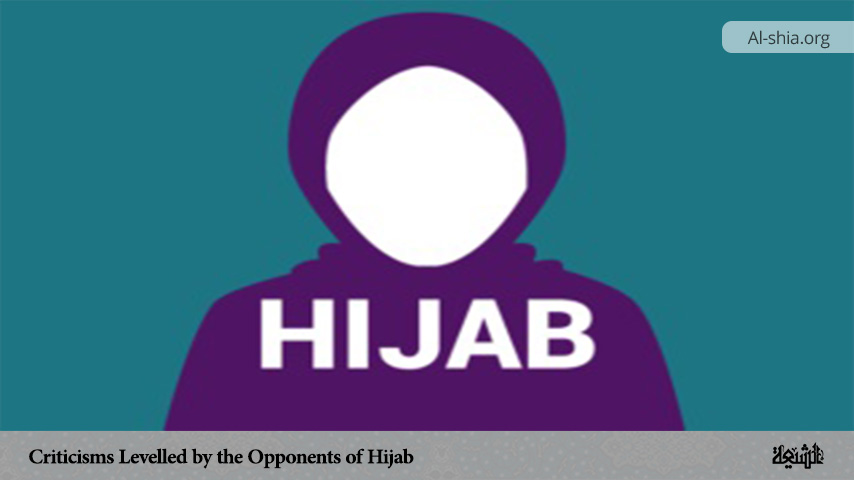 Which points do the opponents of the Hijab point to disagree with the Veil (Chador) and Hijab? In the present work we come to the objections which are levelled by those opposing the veil and which need to be discussed, albeit concisely:

1. The most important thing which all of them support in unanimity and which they propound as the fundamental objection with respect to the issue of the Hijab is that women constitute one-half of the society but the Hijab pushes this multitude into seclusion thereby causing them to lag behind culturally and intellectually.

Especially during the period of economic thriving, when there is a greater need for active human participation, this large female force would remain totally unutilized in the path of economic progress, not to speak of their lack of presence in social and cultural centres.

Thus, they are transformed into a mere consumer that is a burden to society. But those who have resorted to this logic have either been totally oblivious of certain points or have probably feigned a lack of knowledge about them:

Firstly: Who says that the Islamic Hijab isolates a woman and distances her from the social arena?

If, in the past, it had been necessary for us to exhaust ourselves in order to present proofs and arguments in defence of this issue, now, after the Islamic Revolution, there does not exist the slightest need for them, for with our own eyes we observe groups of women, in the Islamic Hijab, presenting themselves in all places – in offices, workstations, political rallies and demonstrations, on the radio and television, in cultural and educational institutes, in hospitals and medical centres, especially for nursing those injured in war, and even in the battlefield against the enemies.

In short, the present state (of the Islamic society) is a fitting riposte to all these objections; if previously we spoke of the ‘possibility’ of such a state, today we find ourselves facing the ‘occurrence’ of it and philosophers have stated that the best proof for the ‘possibility (of occurrence)’ of a thing is the (actual) ‘occurrence’ of that thing, and this is something, which is too evident and manifests to require any explanation.

Secondly:  Is managing the house, training and educating the youthful children and transforming them into individuals, not a task? After all, through their strength and ability, the youths are able to set the gigantic wheels of society into motion.

People who do not view this great mission of women positively are ill-informed of the role played by family and training in constructing a healthy, prosperous and dynamic society.

They imagine that the (correct) manner is that our men and women, like those of the West, should, at the first sign of daybreak, leave their houses for their places of work, either leaving their children in nurseries or locking them up in a room thereby making them taste the bitterness of imprisonment at a time when they are blooming buds.

They are totally oblivious to the fact that this approach not only shatters their personalities but also moulds them into soulless children, who are found to be lacking in human sentiments and affection, and who will eventually jeopardize the future of society.

Secondly: Another of their objections is that the Hijab is a cumbersome dress, which is not well suited for social activities, especially in the modern automobile age. What should a veiled woman look after – herself, her chador, her children or her work?

But these critics do not realize the fact that the Hijab does not always mean a chador, but rather it refers to a woman’s covering. If the Hijab is possible by means of the chador, so much the better, but if not, then a covering is quite sufficient.

The womenfolk of our country, who engage in farming and live in villages – especially those who work in the rice fields and perform the most important and difficult work of cultivating and harvesting the crop, have answered this objection, practically.

They have shown that in numerous places a village woman while observing the Islamic Hijab, can work more than a man and better too – without the Hijab hampering or obstructing her work in the slightest.

Thirdly: Another objection they level is that since Hijab establishes the separation between men and women, it amplifies the greedy nature of man and instead of extinguishing it, only serves to inflame his covetousness, since:

“People covet that which is forbidden for them.”

A comparison of our present society in which the Hijab is prevalent in all places – without exception – with the one that prevailed during the period of the satanic regime, which used to force the women to take off their Hijab will provide the answer to this objection, or more correctly, this sophism and fallacy.

In those days, every alley and neighborhood was a centre of wickedness and depravity, and an ambience of incredible immorality prevailed within the households. Divorces were rampant, the number of illegitimate children was staggering and there were a thousand other curses.

We do not claim that all of these have been eradicated, but they have undoubtedly been greatly reduced and our society, in this regard, has regained its well-being.

And if, Allah Willing, the state of affairs continues its course and all the other tangles come to order, our society, with respect to pureness of the households, and preservation of the merit and worth of women, shall come to achieve a desired and ideal state.